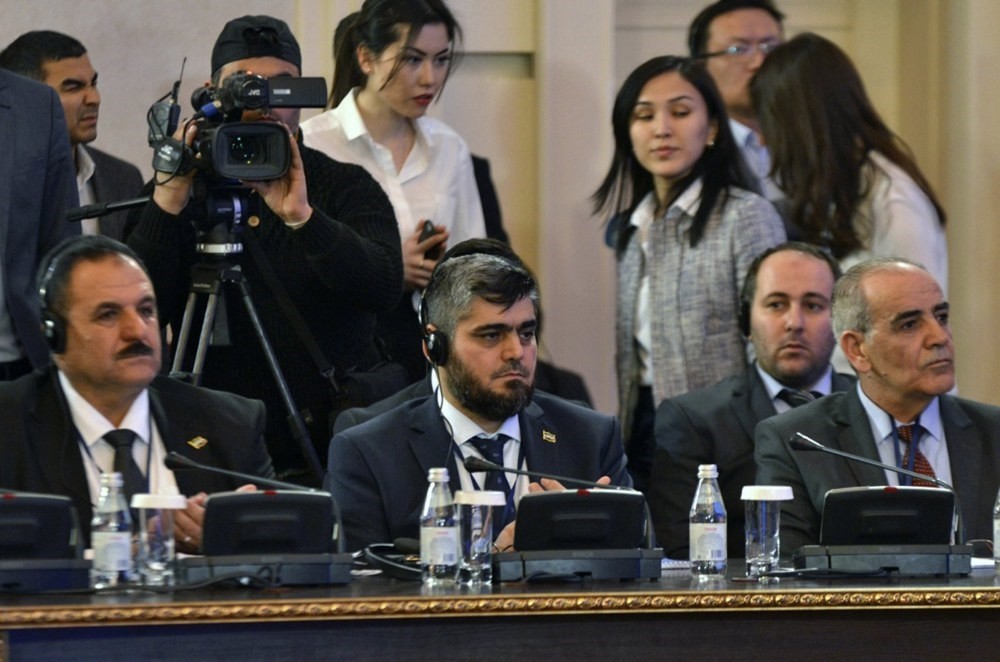 Mohammed Alloush (C), chief negotiator for the Syrian opposition, attends the second round of talks on the Syrian conflict settlement in Astana Thursday.
by Daily Sabah Feb 17, 2017 12:00 am
The Syrian opposition and the Assad regime gathered in Kazakh capital Astana Thursday for the second round of talks to discuss the continuity of the nationwide cease-fire in Syria. The closed-door meeting is expected to bring the two sides to common terms regarding the conflict in Syria.

The meeting is the second time key players Moscow, Ankara and Tehran have brought the warring sides together and it comes ahead of a new round of U.N.-led talks on Syria in Geneva on Feb. 23.

President Recep Tayyip Erdoğan, speaking to al-Arabiya during his visit to Gulf countries, said that the steps taken in Astana are significant. He said that a light at the end of the tunnel appeared in Astana, noting, "We need to get out of the chaos not by killing this light but by further extending."

As talks began in Astana, U.N. Envoy Staffan de Mistura arrived in Moscow for discussions with Foreign Minister Sergey Lavrov and Defense Minister Sergei Shoigu. The meetings, which are to focus on extending the cease-fire, have been brokered by Turkey, which backs the opposition, and Russia and Iran, who support the Assad regime.

Erdoğan said that the Trump administration's attitude in the upcoming term as well as the support of Saudi Arabia and Qatar regarding the issue will play a key role.

"We want the bloodshed in Syria to stop. We do not want children or the elderly to die. Cities in Syria have been shattered and the infrastructure has collapsed. We want that permanent peace be established," the president said.

Meanwhile, Russia's Shoigu claimed Thursday that all hostile activities between the Syrian opposition and the Assad regime have stopped.

"We expect a constructive dialogue to be established with the opposition from now on. As a result, the successes realized since Dec. 29 and what we observe right now are better than the aforementioned date," he said.

The January meeting in Astana saw the three countries agree on a trilateral mechanism for observing and ensuring compliance with the cease-fire.. The Astana talks came after Ankara and the Kremlin brokered a nationwide cease-fire agreement on New Year's Eve, bringing intense clashes between the Assad regime and opposition forces to an abrupt halt as the result of Ankara's assertive and proactive stance on Syria, both militarily and diplomatically.

Egeland lamented that not a single U.N.-arranged land convoy has reached any of more than a dozen besieged towns or villages this year, citing a lack of approvals from authorities.

As the first round of Astana talks came to a close, Turkey, Russia and Iran issued a closing statement in mutual agreement indicating that all sides have agreed "There is no military solution to the Syrian conflict and it can only be solved through diplomatic the implementation of U.N. Security Council Resolution Number 2254 in its entirety."