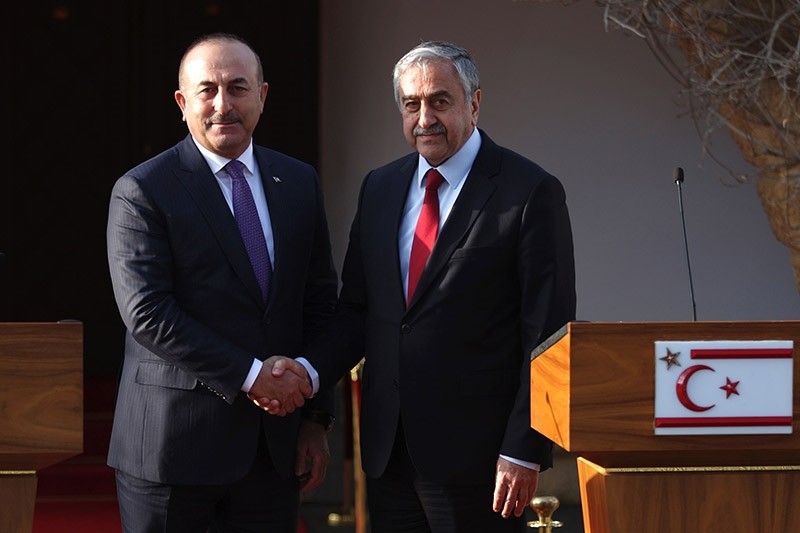 Foreign Minister Mevlüt Çavuşoğlu has expressed that the "enosis" issue was a reflection of the Greek Cypriot administration's insincerity in approaching peace talks.

Speaking in Cyprus during a joint press conference on Tuesday with the president of the Turkish Republic of Northern Cyprus (KKTC) Mustafa Akıncı, Çavuşoğlu said, "At this point, we see that the Greek side has an attitude that is not constructive at all. The attitude presented by Greece shows that they are not ready for a solution. We, with the KKTC, have shown what we want from the beginning."

The foreign minister went on to state that proposing an "enosis" (union) day to parliament at this time was noteworthy.

Çavuşoğlu also underlined that Turkey will remain on the side of the Turkish Cypriots and that this should be taken as "a message for those who are dreaming of enosis."

"For a permanent solution on the island, the Greek Cypriot side should fix the mistake they made," he added.

Meanwhile, KKTC President Akıncı expressed appreciation for Turkey's support in the peace talk process and condemned the Greek side's exploitation of it.

The Greek Cypriot Parliament recently decided to introduce "Enosis (Union) Day" celebrations in schools to mark the 1950 referendum on union with Greece. The issue of the reunification of Cyprus remains unsolved despite a series of discussions that resumed in May 2015. The main goal is to find a political solution with the sides seeking to reunify the island under a federal system after more than 40 years of division.

The eastern Mediterranean island was divided into a Turkish Cypriot state in the north and a Greek Cypriot administration in the south after a 1974 military coup was followed by the intervention of Turkey as a guarantor power. Cyprus' three guarantors, Turkey, Greece and Great Britain, were assigned when it gained independence from the United Kingdom in 1960.

Next target in Syria: Raqqa

Asked about Turkey's ongoing Operation Euphrates Shield in northern Syria, Çavuşoğlu said the next target was Raqqa, a city on the northeast bank of the Euphrates River.

"Turkey's manner is quite clear. We know the area and Syria. The Syrian people are our brothers and sisters," he said.

Çavuşoğlu also added the U.S. should reconsider its decision to support the Democratic Union Party (PYD) and the Peoples' Protection Units (YPG), affiliated with the terrorist group PKK, in its campaign against the Daesh.

Since it resumed its armed campaign in July 2015, the PKK, listed as a terrorist organization by Turkey, the U.S. and the EU, has been responsible for the deaths of approximately 1,100 security personnel and civilians, including women and children.

"We can take steps in Raqqa with the right groups, with the right strategy, not with those who want to achieve their own purposes through ethnic cleansing," the minister said.

Çavuşoğlu also said leaving Raqqa in the hands of the terrorist PKK/PYD would pose a serious threat to the region.

"Involving a Shia militia in a 99 percent Sunni Arab city is dangerous. That's why [the Shia] Hashd al-Shaabi hasn't entered Mosul up to today," he said. "Likewise, it is so dangerous to involve the PKK and YPG terror groups [in the Raqqa operation]."

While the U.S. lists the PKK as a terrorist organization, the former Obama administration had viewed its affiliate PYD/YPG as a "reliable partner." The new Trump administration's policy has yet to emerge.