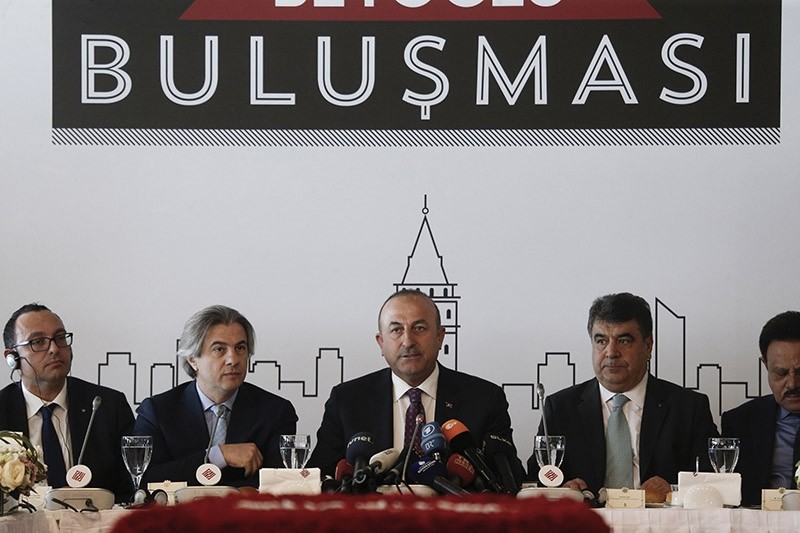 Ahead of his trip to Germany, Turkish Foreign Minister Mevlüt Çavuşoğlu said on Tuesday that he is going to meet with the Turkish community in the northern German city of Hamburg, while also noting that German authorities cannot prevent the meeting.

''Within the framework of democracy and freedom, I am going to meet with Turks in Germany and this cannot be prevented,'' Çavuşoğlu said, also adding that Turkey seeks to have good relations with all countries; but in the case of a hostile stance against Turkey, the country will adopt a similar position," he said.

''Government officials of the Netherlands first said today that the Turkish foreign minister and government officials cannot meet with Turks in their country. Then, they send Turkey hidden messages that if I meet with Turks in the Netherlands, Wilders [far-right, anti-Muslim political leader] would gain popularity among the Dutch public at the expense of their government,'' Çavuşoğlu noted.

Çavuşoğlu blamed mainstream European politicians for the growing influence of populist speeches and the programs of far-right leaders (i.e. France's Le Pen, the Netherlands' Wilders), saying that they did not take the necessary steps to counter their propaganda, and added that Europe is turning increasingly more to far-right politics, similar to what happened back in the 1930's and 1940's.

''If the rise of far-right parties in Europe cannot be contained, the continent will be moving back to the pre-World War II era,'' the Turkish foreign minister warned.

''Sadly, I learned today that first the German police, then German intelligence members pressured the owner of the complex, where I am due to meet with the Turkish community, so that he cancels the event. As the owner of the complex dismissed their request, and even his business license was revoked. This is not admissible by any standard of basic human rights,'' Çavuşoğlu also added.

Previously on Friday, Cologne authorities withdrew permission for a hall to be used for a speech by Economy Minister Nihat Zeybekci in Frechen on the outskirts of the city.

Since the beginning of 2017, Germany has adopted a harsher and more hostile stance in its Turkey policy, which has been decried on several occasions by Turkish officials and political leaders who have also warned German authorities that their decisions may have a dramatic impact on bilateral ties.

Earlier this year, Germany accused Turkish imams serving in Germany of espionage, hosted events and rallies organized by the PKK, an armed group that both Ankara and Berlin consider a terrorist organization, and alienated Turkish officials when Chancellor Angela Merkel used the phrase "Islamist terrorism" during a press conference with Erdoğan in attendance on February 2.