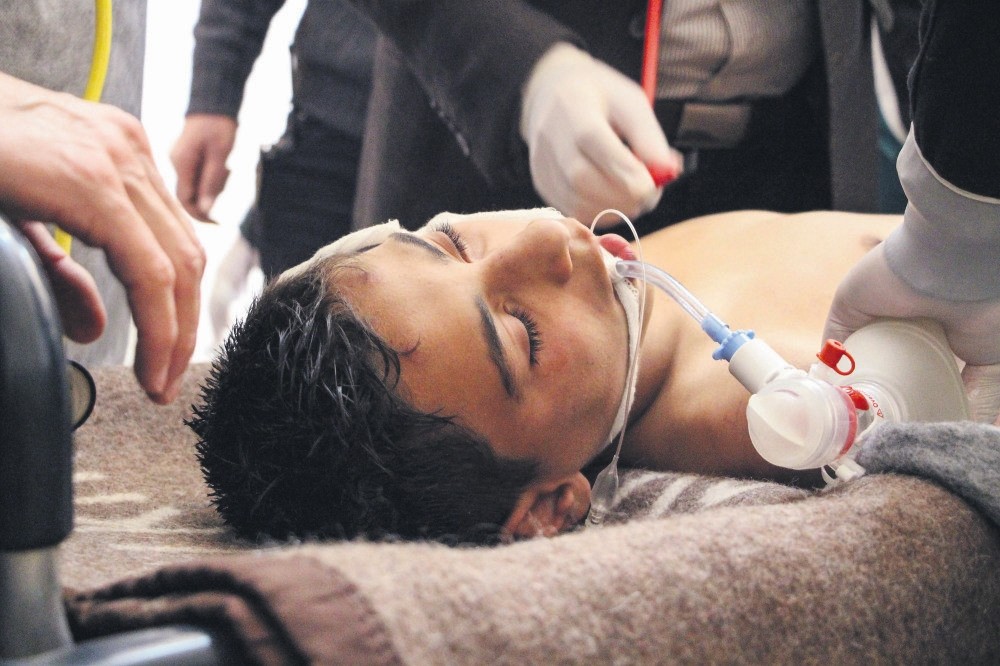 The group of G7 countries, as well as Turkey, have reiterated that the Bashar Assad regime is responsible for the chemical attack on civilians in Syria's Idlib and that Assad's removal is the only option for a political solution to the nearly seven-year old conflict

After the Group of Seven industrialized nations, including Canada, France, Germany, Italy, Japan, the U.K. and the U.S., met Tuesday in Italy, they collectively agreed that Bashar Assad must go from Syria and indicated that the regime was responsible for the deadly chemical gas attack last week that left hundreds of civilians dead. Speaking at the G7 Foreign Ministers' meeting in the Italian city of Lucca, U.S. Secretary of State Rex Tillerson stressed that Assad should not be part of Syria's future as the G7 nations urged for a diplomatic solution to end the ongoing civil war.

Additionally, the host of the G7 meeting, Italian Foreign Minister Angelino Alfano said the ministers had failed to reach an agreement on imposing fresh sanctions on Damascus and Moscow, noting that the latter should not be "pushed into a corner" for backing the Assad regime.

Commenting on the two-day meeting, Alfano said that the U.S. missile strikes launched in response to last week's chemical attack in Syria offered a window of opportunity for building a new, positive situation.

Meanwhile, Turkey's Health Minister Recep Akdağ said yesterday that the laboratory results have confirmed the use of sarin gas in the attack on Syria's Idlib on April 4 that killed nearly 100 people.

Even though the G7 foreign ministers reached a consensus that a solution to the Syrian crisis cannot be reached while Assad remains in power, British Foreign Secretary Boris Johnson's proposal for the introduction of new sanctions on Moscow was not accepted by his counterparts.

"Russia can be a part of that future and play an important role," Tillerson said. "It is clear to all of us that the reign of the Assad family is coming to an end."

While the G7 members did broadly agree on the necessity of Assad's removal, they did not reach a consensus on when or how this would be achieved. Echoing Tillerson's remarks, the Italian foreign minister urged "dialogue with Russia" and said that they "must not push Russia into a corner."

Rather than sanctions, the meeting's final statement called for an investigation by the Organization for the Prohibition of Chemical Weapons to determine who was responsible for the "war crime" while the U.S. and U.K. said there is little doubt that Assad's forces are culpable.

Meanwhile, Turkish Foreign Minister Mevlüt Çavuşoğlu said on Tuesday that preliminary findings indicated that the Assad regime still has the capacity to use chemical weapons. Foreign Minister Çavuşoğlu also stressed the importance of the fight against terrorism, and the need to stop the Assad regime from targeting civilians with not only chemical weapons, but also tanks and other conventional weapons.

Çavuşoğlu reiterated the Assad regime's numerous violations of the cease-fire agreement brokered at Astana, adding that the G7 meeting addressed the possible risks posed by these violations.

The Turkish foreign minister also emphasized that Russia must be convinced to pursue a Syria without the Assad regime, adding that this was the most viable political solution.

"We have stressed that [the Assad regime] may also attack Idlib and we need to take measures for this. We have also stressed that Russia should be persuaded to pursue a [solution in] Syria without Assad... Now, we have to end the regime's tactics of distraction," he stated.

Shortly after the G7 meeting, Russia's Sputnik news agency reported that Russian President Vladimir Putin said yesterday he has intelligence from "trusted sources" that chemical weapon provocations are currently being prepared in more regions in Syria, including Damascus, after holding talks with Italian President Sergio Mattarella.

"All incidents that resemble the chemical attacks that took place in Idlib must be thoroughly investigated," Putin said.

In the midst of the G7 meeting, the U.S. also signaled a new response to the Assad regime in case of another possible chemical attack on civilians. White House Press Secretary Sean Spicer said Monday that the use of barrel bombs, which Syrian regime forces have repeatedly employed throughout the six-year-old conflict, might bring a U.S. response.

"The sight of people being gassed and blown away by barrel bombs ensures that if we see this kind of action again, we hold open the possibility of future action," said Spicer.

In response, Iranian President Hassan Rouhani said, "The U.S. attacking Syria was wrong. It happened for the first time but a recurrence could result in very dangerous outcomes."

Rouhani further added to his remarks on Monday with an unexpected remark stating that "reform is needed in Syria."

Meanwhile, Turkey's Defense Minister Fikri Işık will visit the U.S. and meet with his counterpart James Mattis today. Bilateral relations between Turkey and the U.S. as well as the latest developments in Syria are expected to be discussed during the meeting.

Işık and Mattis are also expected to discuss possible developments in Syria.

On the other hand, Turkey will likely express its demand to clear the PKK's Syrian-offshoot, the Democratic Union Party (PYD), from Manbij. Işık will likely urge the necessity of conducting a Raqqa offensive jointly with the Turkish Armed Forces (TSK) and the Free Syrian Army (FSA).