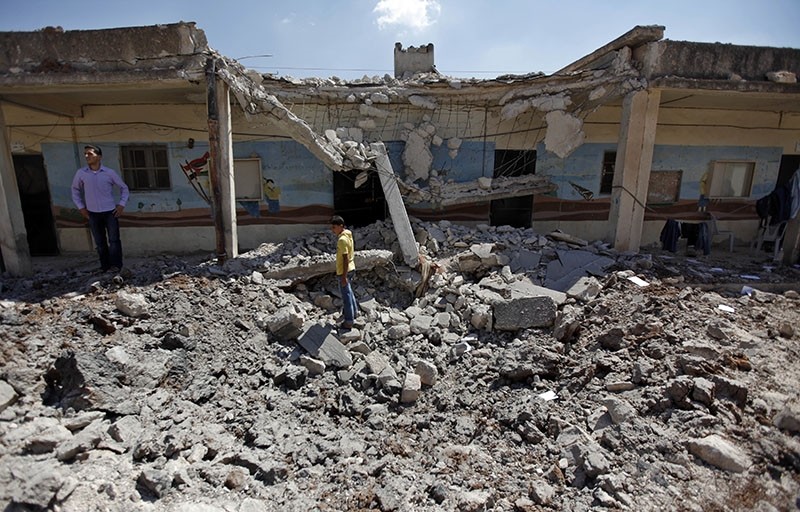 Syrians check the damage of a destroyed school after it was hit by an Assad regime air strike killing six Syrians in the town of Tal Rifat on the outskirts of Aleppo city, Syria. (AP Photo)
by Anadolu Agency Apr 12, 2017 12:00 am

A Turkish government minister Wednesday called for military force to be used against Bashar al-Assad's regime in order to prevent further atrocities against civilians.

EU Affairs Minister Ömer Çelik said that Assad had manipulated efforts to resolve the six-year conflict in Syria while carrying out attacks on civilians.

"The world needs to use force to stop the massacres," he told Anadolu Agency during a visit to Adana province in southern Turkey.

Çelik did not say whether Ankara would be willing to provide troops for any military force against Assad, who is backed by Russia and Iran.

Turkey ended a seven-month operation in northern Syria last month that had been aimed at ridding the region of terrorists.

Last week, a chemical attack in Khan Sheikhun carried out by Assad forces left more than 100 civilians dead. Authorities in Turkey who have treated some of the survivors have said that sarin gas was used.

At the end of last year, Russia and Turkey brokered a cease-fire that has been widely breached despite peace talks in Astana and Geneva.

"Assad must end his policy of killing through the use of chemical or standard weapons," Çelik added. "Otherwise, the political solution will not be put in practice."

According to the UN envoy on Syria, more than 400,000 people have been killed in the conflict.