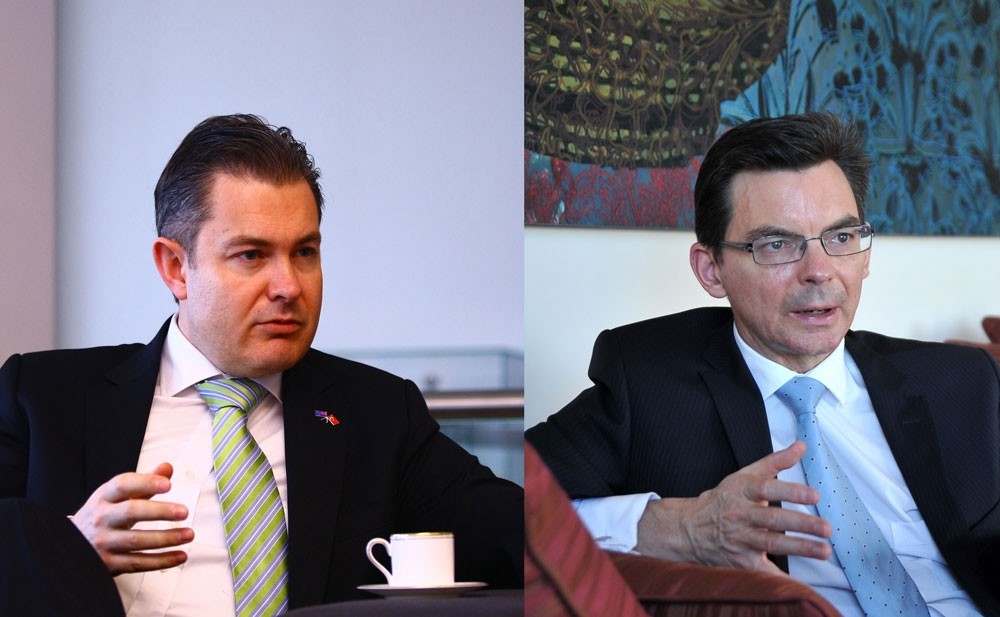 The Envoys of New Zealand and Australia to Ankara stressed the significance of ANZAC Day for their respective countries, saying that it keeps national consciousness and identity alive and it, in many ways, defined who they are as people.

On April 25, 1915, the Australian and New Zealand Army Corps (ANZAC) landed on the shores of Gallipoli in Turkey where Aussies and Kiwis fought together for the first time during World War I. Even though the Gallipoli campaign was not a military success, it left behind a powerful legacy, creating what is known as the "Anzac legend." Therefore, April 25 is commemorated as Anzac Day by both Australia and New Zealand. As this year marks the 102nd anniversary of the Gallipoli War, Australian Ambassador to Ankara James Larsen spoke about the significance of Anzac Day, saying that it is very much a core part of Australia's national history, asserting that "It [the Gallipoli War] defined who we are as a nation in many ways, in the sense of our soldiers going overseas to war for almost the first time in Australian uniform, fighting under the Australian flag for almost the first time."

New Zealand Ambassador to Ankara Jonathan Andrew Curr also underlined the significance of Anzac Day for New Zealand's national awareness and identity, emphasizing that it is a day that marks the founding of the Anzac relationship. "Anzac Day also marks service in the Second World War, Korea, Malaya, Vietnam, Bosnia and Afghanistan, as well as our many other peacekeeping operations.'' Ambassador Curr said.

Regarding the impact of Anzac Day on bilateral relations, New Zealand Ambassador Curr said Anzac commemorations have a tremendously positive influence on bilateral relations, noting: "Despite the conflict on the Gallipoli Peninsula over a century ago, a strong friendship has grown out of reconciliation between our two nations." The ambassador went on to say, "[The] Gallipoli [War] is widely regarded by both sides as the foundation of our friendship and it has brought two countries that are both very different and far away from each, closer together in a special way. It is also an example for the world of how reconciliation and friendship can arise out of conflict," he added.

From the Australian perspective, Ambassador Larsen says that Anzac commemorations are milestone events for bilateral relations. "When I came here [to Turkey], I was astonished by how deeply felt and profoundly influenced our Turkish perceptions are by the Battle of Gallipoli and how much our Australian relationship is often perceived through the prism of the shared Gallipoli experience. I think one of the reasons for this is, if you look at the archives and see the letters that the soldiers sent home. ...In these letters, they talk about the admiration the Australian soldiers had for their Turkish foes and the decency the Turks showed to the Australians," Larsen said.

Commenting on the future of Turkish-Australian relations Ambassador Larsen said Australia is here for the long-term in terms of its strong and friendly relationship with Turkey and the Turkish people. "So, our ambition is to look at the positive aspects of our relationship and foster these relations to allow our countries to continue to be more productive, more collaborative and build on [the relationship] we have. One area in which we would like to do more business. I want to encourage more Australian businesses to look at Turkey and, of course, Turkish businesses to look at Australia for opportunities," Larsen said "If you look at the strengths of the Australian economy, they are very conducive to what we would like to do in Turkey especially in the mining, agriculture and education sectors," he added.

"In education, we would love to see more Australians come to Turkish universities and more Turks come to Australian universities. Australia is a superpower in the mining sector. I think there is vast potential for the resources industry in Turkey over time, so, we would be very happy to share investment, knowledge, expertise, and two-way opportunities. In agriculture, Australia and Turkey are very similar large countries with a vast agriculture sector. We can collaborate much more with business partnerships regarding the types of animals we choose in agriculture, the type of crops we cultivate, the technology we use, and water supply. There is lots we can do," Ambassador Larsen concluded.

Regarding the future of Turkey-New Zealand relations, New Zealand Ambassador Curr underlined that there is a lot that can be done. "We are interested in enhancing cooperation in the economic sphere and New Zealand will host a meeting of the New Zealand-Turkey Joint Economic Commission later this year. The potential for closer cooperation is enormous. There is so much more we could do if there were freer trade between New Zealand and Turkey, especially in regards to agricultural goods. We hope that it will be possible to work with Turkey for the establishment of a Free Trade Agreement (FTA) in the future," he said. "We consult regularly on foreign policy issues. We value Turkey's views on the surrounding region, especially the Middle East, and we share our views on the Asia-Pacific region. We plan to hold political consultations later this year," he added.

"We work cooperatively on international issues such as the Syrian refugee crisis. As a responsible member of the international community, we want to help Turkey deal with this burden, through support for the U.N. organizations working here and through bilateral mechanisms. We have been working on an agreement to fund the construction of a school in [Turkey's] Şanlıurfa province to help meet educational needs there. We also stand with Turkey in the fight against terrorism, and are both part of the coalition against Daesh," Ambassador Curr concluded.
Last Update: Apr 25, 2017 10:46 am
RELATED TOPICS