US policy in Syria a remnant of Obama's blunders 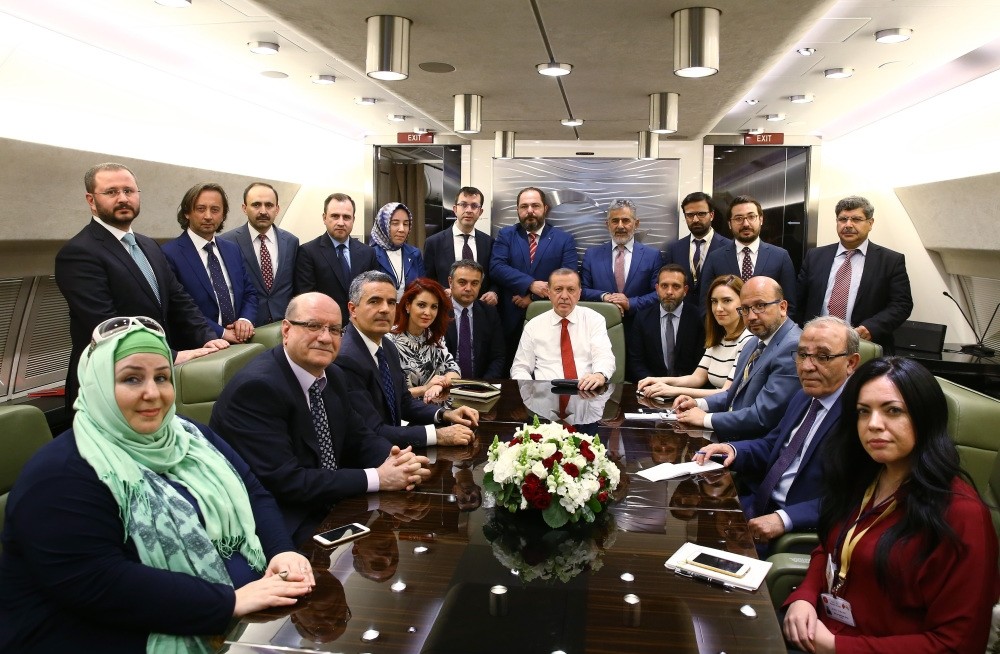 On his return from a two-day official trip to India, President Erdoğan reiterated that U.S. support to the PKK terror group's Syria affiliate, the YPG, which began during the Obama administration, are bringing U.S.-Turkey relations to a deadlock. Erdoğan also highlighted Ankara's expectation of the Trump administration to end support to the terror group

President Recep Tayyip Erdoğan, speaking to journalists on his return trip at the conclusion of his official visit to India, said the current U.S. policy in Syria of aiding the PKK terrorist group's affiliate People's Protection Units (YPG) was a relic of the previous Obama government that he hoped would be drastically changed by the current Trump administration. He implied that the Russian presence in Afrin was not top priority for Turkey, whose focus was toward the east of Syria on Dabiq, al-Bab and al-Rai and where the U.S. presence has impeded the progress of Turkey's effort to fight terrorist threats. Concerning Afrin, he said the YPG had conducted attacks on Turkish positions on the border in recent days and the Turkish military responded as per its own rules of engagement to repulse them.

"The visit to the U.S. on May 16 is very important for me. I see what is taking place in Syria as the remnants of the Obama era, with U.S. commanders in the region persisting in following the same policies. During the visit, we'll be discussing these subjects with President Donald Trump and express our consternation over its continuance. If it continues as is, it is impossible for us to be in agreement with the U.S."

He was adamant that it was unacceptable for Turkey that the U.S., as a strategic ally and a NATO partner, cooperated with terrorist groups. "We will express our position and I believe Trump will be welcoming toward it. Consequently, I prefer not to delve into the matter in detail before the meeting on May 16."

WHAT EU HAS TO DO IS CLEAR

The president expressed his surprise at the sudden volte-face by some European leaders after the approval of constitutional changes for a presidential system in last month's referendum. He noted that the foreign minister, Mevlüt Çavuşoğlu, had attended an EU foreign ministers' gathering in Malta earlier this month. After months of banning supporters of the constitutional changes from holding rallies and actively encouraging the "no" campaign against, "They suddenly seem like "yes" supporters and appear to be asking what can be done now to mend ties." Erdoğan said what the EU needed to do was clear. "They need to immediately start the discussion on the EU accession chapters and open Turkey's way to membership. If not, we will contemplate what we will do in response. If they insist on keeping the door shut, we will act in accordance with our interests. Something akin to the U.K. opting for Brexit may well occur here."

When asked how Turkey could withdraw from the EU without being a member, Erdoğan said it was possible as long as the public decided so.

The president described the new policy document, the first since its founding charter, released by Palestinian group Hamas as an important manifesto. With the document, Hamas declared its willingness to accept an interim Palestinian state within pre-1967 boundaries for the first time. "Hamas declares that Jerusalem needs to be the capital of the state of Palestine. It also underlines the importance for the Palestinian Liberation Organization (PLO) to embrace all Palestinian groups, including Hamas. Another point made is their struggle being with Zionism and not with Jews."

He dismissed claims that with the document, Hamas was putting distance between itself and the Muslim Brotherhood. "I am clear in this regard. I don't accept the Muslim Brotherhood as a terrorist group. Never have. I said so during my meeting with the American Jewish Committee, as well as at my discussions with Presidents [George W.] Bush and [Barack] Obama. They don't have weapons. It is a group based on belief. You cannot call an organization without weapons a terrorist group."

President Erdoğan, when asked about the more than expected support for the constitutional changes from Kurds in the east and southeast, said: "It was not more than expected. We, actually, expected much higher support from the southeast. Still, the results were fine. In some places, there were two, three and even 10-fold increases in support."

The Kurds in the southeast had been trampled underfoot by the PKK in the past decade, forced to live and vote under the threat of guns, he said.

"However, once the gendarmerie and police took the necessary precautions, the region started to transform through urban renewal and infrastructure projects. Sur [Diyarbakır's municipality] is a completely different place now. People there now can go on picnics. With civilians who were forced to leave their homes due to terror now returning to their newly built houses, the region will go back to normal."

Erdoğan reminisced about his youthful political activism in the region, where him and his friends used to spend the night in the homes of the locals and used to have breakfast altogether on the floor.

"At the beginning of my prime ministry, we were visiting the Ani ruins, in Kars and decided to make a surprise call on one of the homes nearby. We saw a light and knocked on the door. A woman opened it and I asked her whether she would accept us as guests and offer us some bread and cheese. She did, when I asked whether her husband was at home, she said he, as a sheppard was away but after a phone call, he was on his way back. Soon, we were served with bread, cheese and honey. We visited another home nearby, where we were served with coffee. Our host's son's wife, while bringing the coffee, dropped the tray and started crying. She had cut her hand. Recep [Akdağ the health minister] was with us. He tended her, before taking her to a hospital. The region's people are very hospitable but they have been terrorized for decades. Some were also, unfortunately, tricked by terror groups. However, I believe those dark days will be soon behind us."

He said Turkey would not take a single step backward in its fight against terrorism.

He also condemned people from abroad who criticized Turkey's decision to extend the state of emergency instituted after last year's coup attempt by the Gülenist Terror Group (FETÖ). He mentioned France's 18-month emergency rule, which he argued was ignored by most.

He said the ruling Justice and Development Party (AK Party) government had always been sensitive to the state of emergency, citing the first AK Party government's decision in 2002 to annul the emergency rule in the southeast only a month after coming to power.

"Contrary to then, the current emergency rule is aimed at creating peace. It helps our efforts to fight terrorism. If it hadn't been for the emergency rule, we wouldn't be tackling the PKK and the FETÖ threat so effectively. Moreover, the emergency rule in France was instituted after a few terrorist attacks. We did the same only after a terrorist group tried to topple the state itself."

When asked about what he planned to do within the AK Party once he becomes a member, he smiled and said: "This is a trick question. I am not a member yet. I will god willing apply to be a member tomorrow [yesterday]."