Erdoğan-Trump meeting on May 16 will be decisive 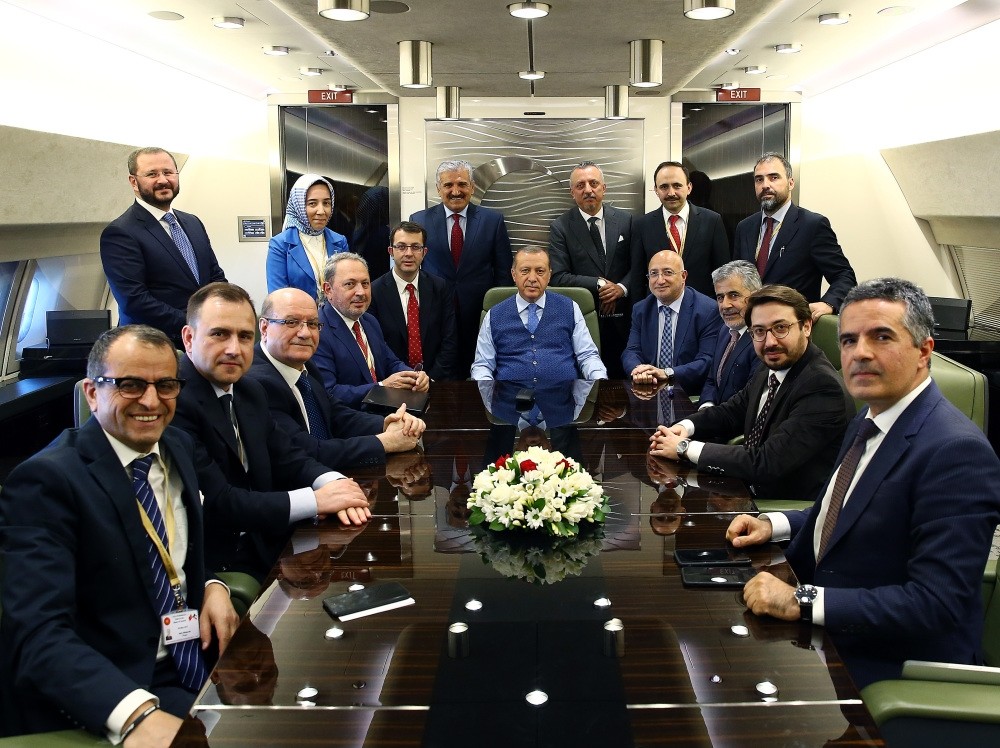 President Erdoğan told reporters that preliminary discussions held by a Turkish delegation led by his spokesman will pave the way for conclusive talks with Trump concerning U.S. stance on the YPG and FETÖ

The meeting between President Recep Tayyip Erdoğan and his American counterpart Donald Trump on May 16 in White House and the discussions there on the U.S. position toward the terrorist PKK's Syrian affiliate, the People's Protection Units (YPG), and the Gülenist Terror Group (FETÖ) will be conclusive, not the preliminary discussions recently conducted by senior officials on both sides, said Erdoğan.

Speaking to reporters on his way back from Kuwait late on Tuesday, Erdoğan said the recent series of meetings in Washington, D.C. held by presidential spokesman İbrahim Kalın, National Intelligence Organization (MİT) President Hakan Fidan and Chief of General Staff Gen. Hulusi Akar with U.S. officials should be seen merely as a preliminary round of talks in preparation for the meeting he will hold with Trump.

"I will meet with our officials tomorrow [yesterday]. There will be an assessment of how their meetings went," he said.

TURKEY HAS A SAY IN WHAT HAPPENS IN MIDEAST

Erdoğan's comments came before the Pentagon announcement later on Tuesday Turkish time that Trump had approved the transfer of weapons to the Syrian Democratic Forces (SDF) dominated by the YPG. The YPG is the Syrian wing of the PKK, which is recognized as a terrorist group by Turkey, the U.S. and EU.

Erdoğan said no matter what happened in the wider Middle Eastern region, Turkey had to retain the power to intervene on its own. "If we don't take the necessary steps to protect our security, threats will emerge. Just think about the YPG. Suddenly, you see your NATO allies cooperating with such groups. This is unacceptable."

He cited several remarks by U.S. officials who defended the support to the YPG while expressing their hope that the group would not harm Turkey. "Simple words don't work here. This shows you cannot grasp the direct link between the PKK and YPG. We will, of course, raise all this in detail at the NATO meeting. We will also raise the matter during the visit to the U.S. We need to talk about it, because we need to understand each other."

The NATO meeting will take place on May 25 in Brussels.

He said it was impossible to make a decision concerning the Middle East without Turkey's input. "If anyone does so, they pay the price. Both in economic and human cost. They also harm the peace. Is there peace in Iraq today? Is there any in Syria? No. Just look at Palestine. No peace can be achieved with this mentality."

The president, who called French President-elect Emmanuel Macron after his victory, said his first impression from the conversation was positive. "We don't know each other. He suggested a meeting on the sidelines of the NATO summit, which I accepted."

Erdoğan said Macron's declaration that he represented a centrist political movement was notable, adding that the ruling Justice and Development Party (AK Party) was the first party to utter a similar motto when it was first founded, he said: "The world no longer wants constant oscillation between the left and right. It wants a centrist message. When we utter a similar outlook, some pundits make fun of us. There were some who dismissed it, arguing that there has never been such a political outlook since Jean Jacques Rousseau and Montesquieu. I wonder what they are thinking now."

It is now the time to work on developing the concept, Erdoğan said. "A centrist movement has been in power in Turkey for the past 14-15 years. This means the public has accepted it. We did our best to provide the people with ideal service. We will continue to do so. I will also say this. Don't we have any deficiencies? We certainly do. We will address them and unite to carry our country toward a positive direction."

When asked about what will happen within the cabinet after the May 21 convention, Erdoğan said it was premature to comment on anything before the convention took place, but added that the party and the government would definitely present a list of short-term objectives afterwards.

It did not take long for the referendum result, which allows Turkey to switch from a parliamentary to presidential system, to have a positive impact on the economy, argued Erdoğan.

"We will hold the AK Party's convention on May 21. I believe, the positive impact will accelerate afterwards."

Erdoğan, after last month's referendum, joined the AK Party, which he founded. During the May 21 AK Party convention, Erdoğan is expected to take over as chairman.

Turkey's economy was resilient and on solid footing, he said, only affected by the regular tumults in the global economy. With stability, all sectors of the economy were ready to liftoff, he said and stated that he had no doubt the country will attract a significant amount of capital investment in the near future.

Erdoğan will be leading a Turkish delegation to China before moving on to Washington, D.C. to meet with Trump. On the China visit, Erdoğan cited his previous meeting with Chinese President Xi Jinping in Istanbul on the possible avenues of cooperation between the two countries as part of Beijing's modern day Silk Road project, One Belt, One Road.

"After the discussion, progress was muted. If we can accelerate bilateral efforts, it will be good for both sides."
RELATED TOPICS