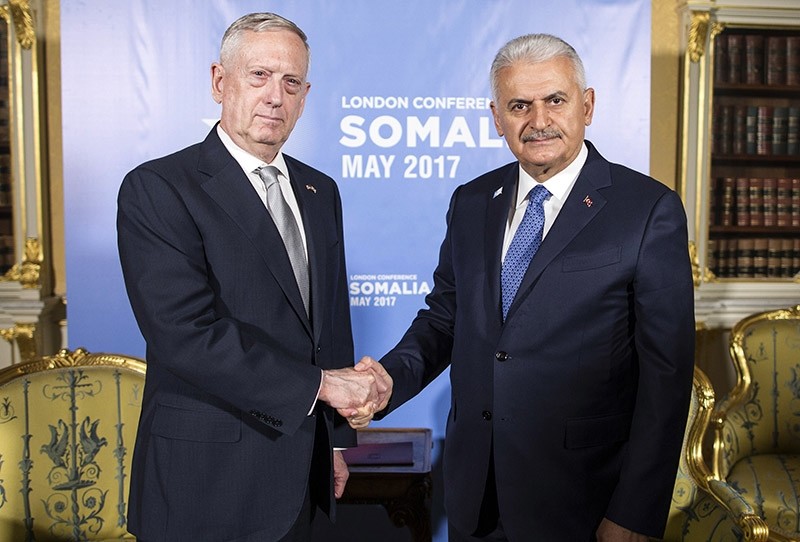 According to sources, the 30-minute meeting took place at the British Foreign Ministry office's Lancaster House and was closed to the press.

"The secretary reiterated the U.S.'s commitment to our NATO ally," stated the readout, provided by Pentagon spokeswoman Dana White.

"Both leaders affirmed their support for peace and stability in both Iraq and Syria."

U.S. President Donald Trump's decision to authorize the Defense Department to equip the U.S.-backed Syrian Democratic Forces (SDF), which is predominantly led by the PKK terror organization's Syria offshoot, the People's Protection Units (YPG), has angered Ankara ahead of the upcoming visit by President Recep Tayyip Erdoğan to the U.S., where he will meet Trump for the first time.

Prime Minister Binali Yıldırım Wednesday slammed the U.S. decision to arm the PKK's offshoot group for the offensive against the Daesh terror group in Syria's Raqqa, saying, "A terror organization cannot be defeated by another terror group."

It was not immediately clear if the leaders discussed President Donald Trump's decision this week to arm the YPG.

Mattis said on Wednesday that he was confident the United States would be able to resolve tensions with Turkey over the U.S. decision to arm PKK-linked YPG forces in Syria, declaring, "We'll work out any of the concerns."

The defense secretary told reporters during a visit to the Pabrade Training Area in Lithuania: "We will work very closely with Turkey in support of their security on their southern border. It's Europe's southern border, and we'll stay closely connected."

During a press conference in Ankara ahead of his visit to the United Kingdom, Prime Minister Yıldırım said, "It is not possible for us to accept direct or indirect aid to the PKK. The U.S. should make a decision. If a fight against terror will be put forward, Turkey is already doing that."