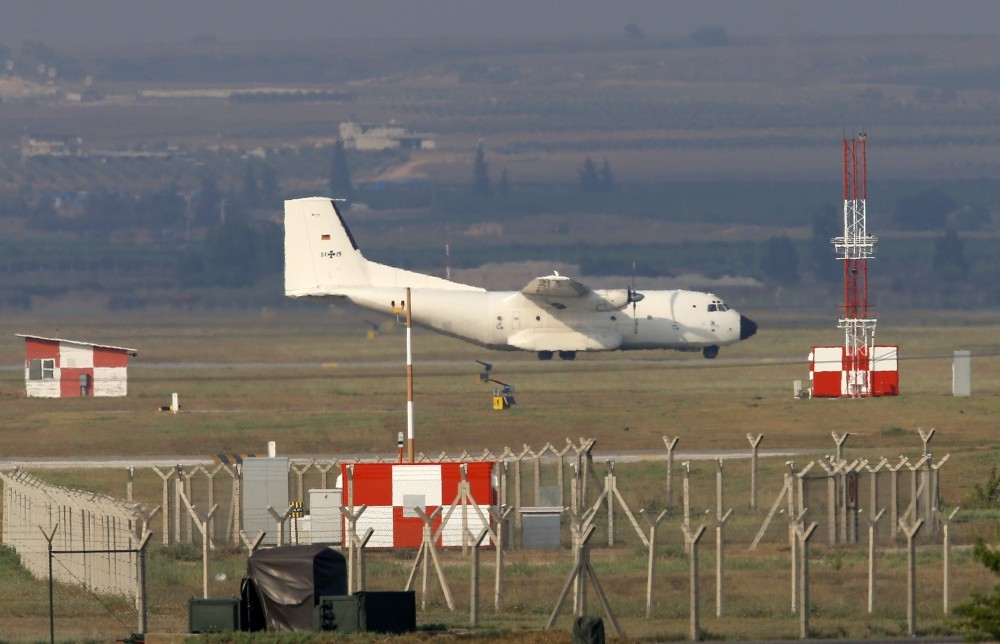 A German Air Force cargo plane maneuvers on the runway after it landed at the Incirlik Air Base, in the outskirts of the city of Adana, southern Turkey in July 29, 2015.
by Yunus Paksoy May 18, 2017 12:00 am

Turkish lawmakers reiterated that Germany's possible move to pull out from the İncirlik Air Base won't effect theanti-Daesh fight, since the German military does not have vital role in the campaign and its reconnaissance jets have not been sharing intelligence with Ankara in any case

Berlin has stiffened its tone against the Turkish government regarding the recent İncirlik Air Base spat by threatening to pull out of the base. However, diplomatic sources, along with deputies in Ankara, have not shied away from showing the German government the door. The German Parliament is set to gather today to discuss a swift withdrawal from the İncirlik Air Base following the ban on a German parliamentary defense commission. "I can only hope that the Turkish government changes its mind in the coming days. Otherwise, the German Parliament will certainly not leave soldiers in Turkey," German Foreign Minister Sigmar Gabriel said Wednesday.

Berlin is conducting a rushed search for a new location in lieu of the İncirlik Air Base issue. It has been speculated that Jordan will be the best option for Germany. Diplomatic sources from Germany told Daily Sabah that a bilateral meeting between President Recep Tayyip Erdoğan and German Chancellor Angela Merkel next week at the NATO summit will be decisive in making the withdrawal decision.

According to German sources, Merkel will call on Ankara to refrain from preventing the future visits of German lawmakers to İncirlik. Germany's Social Democrats (SPD) made Berlin's intention known yesterday, calling on Merkel to acquire "a permanent right to visit troops at İncirlik" during the Erdoğan meeting.

In spite of Berlin's demand for a permanent right to visit İncirlik and its threats to pull out of the air base, Ankara remains adamant on the issue. Diplomatic sources in Ankara told Daily Sabah that the German government is intentionally magnifying the matter.The sources said Berlin is trying to put pressure on Turkey by threatening to withdraw from İncirlik. Despite stressing that "Germany is free to leave the air base," the sources said that Erdoğan and Merkel may nevertheless reach an agreement.

In the midst of the two-sided spat, the Turkish Parliamentary Defense Commission members stand with the ban decision. Kamil Aydın, a Nationalist Movement Party (MHP) deputy in the commission, told Daily Sabah that it is not "acceptable that German lawmakers walk in and out of the air base whenever they want."

Aydın asserted that Germany can transfer its troops and Tornado jets whenever it wants, and said, "This is Turkey's attitude on the issue." He also added that: "Merkel has been attempting to up the tension between the countries. We support the decision in this regard."

Daily Sabah has also learned the reasons for the ban on the German lawmakers' visit. Sources said there were PKK and Revolutionary People's Liberation Party-Front (DHKP-C) sympathizing lawmakers in the German delegation. To shed some light on the issue, Daily Sabah reached out to the German Parliamentary Defense Commission, however, the commission did not give the names of the commission members who would visit the air base.

Germany's uncooperative stance towards the Gülenist Terror Group (FETÖ) is another source of tension since the country has been a safe haven for hundreds of FETÖ members, including high ranking NATO military officers. Last week, Gülenist NATO military officers were granted asylum in Germany. In addition, a report said yesterday that several Gülenists applied for asylum in the German city of Frankfurt.

The spat between the two countries prior to the April 16 constitutional referendum in Turkey is considered to be another reason for the ban. Hostile statements from Berlin about Turkish politicians traveling to Germany during the referendum campaign period also played a role in the Incirlik ban.

Hüseyin Kocabıyık, a Justice and Development Party (AK Party) deputy and a member of the Parliamentary Defense Commission, lashed out at the German delegation set to visit the air base. "Those who would visit İncirlik are terrorism supporters," Kocabıyık said. The deputy said Germany has taken the side of terrorist groups for a long time.

Likewise, the AK Party deputy went on to reveal a crisis with the German reconnaissance jets taking off from İncirlik as part of the anti-Daesh coalition. "German jets have not been sharing intelligence with Turkey. It is against the agreements," he contended.

Upon a question about Germany's intention to move its troops to Jordan, Kocabıyık said German troops can leave any time they want.The possibility of moving the troops to Jordan remains questionable, however. According to information obtained by Daily Sabah, German Defense Minister Ursula von der Leyen will pay a visit to Jordan this weekend to discuss the issue.

Turkish diplomatic sources consider Germany's intention to pull its troops out of İncirlik an unnecessary move. The fact that German lawmakers cannot visit the troops does not prevent the German military from conducting operations against Daesh, the sources said.

Germany has about 250 soldiers stationed at the base in southern Turkey, along with six Tornado reconnaissance jets, 180 to 200 containers and a refueling plane, all of which are used in the U.S.-led air campaign against Daesh militants in Iraq and Syria.