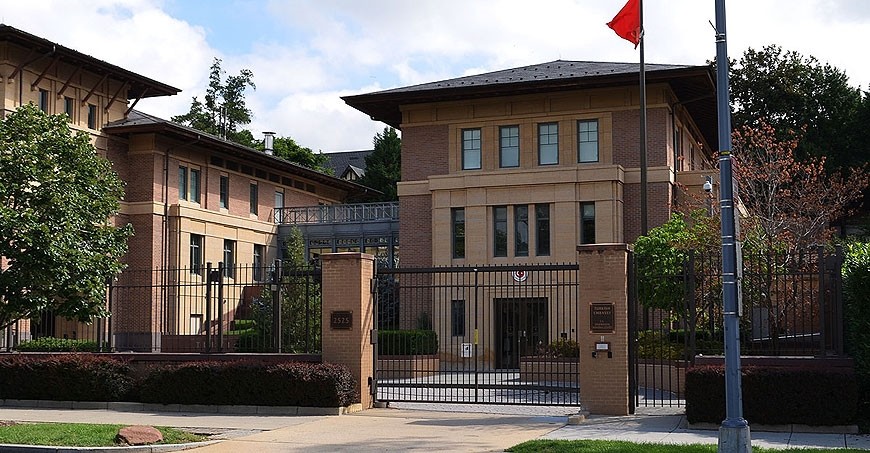 "American agents detained two Turkish security officers who were responsible for the Turkish minister's protection after a brief quarrel. Turkish officers were trying to enter the Turkish Embassy to be with the minister. American agents blocked the way," one senior Turkish diplomat said. Çavuşoğlu was accompanying President Tayyip Erdoğan, who was meeting the CEOs of leading U.S. companies last Tuesday.

The incident outside the Turkish Embassy is a separate event from the violence that broke out near the Turkish Ambassador's residence. Several hours after U.S. police took the situation under control in Sheridan Circle where opposing groups violently clashed, this time another problem emerged in another location, the Turkish Embassy.

President Erdoğan's motorcade moved from the Turkish Residence to the Embassy, and as a result, the Washington Police force and the related American security agencies blocked the way both for vehicles and pedestrians.

"We tried to convey our concerns and objections about these detentions to the U.S. State Department before going to the press. However some American officials tried to mix these two incidents and released statements on the background as if two Turkish bodyguards were arrested due to the clashes with the protestors. No, they were arrested simply because they wanted to enter the Turkish Republic's Embassy," the senior Turkish official said, speaking on condition of anonymity due to government protocol.

A Daily Sabah correspondent witnessed that senior Turkish diplomats were stopped by the Washington Metropolitan Police force and prevented from approaching the Embassy, for 15 to 20 minutes, until another diplomat came to their rescue.

The brief detention of Turkish security officers led another diplomatic crisis with the United States. The Turkish Foreign Ministry summoned John Bass, the U.S. Ambassador to Ankara, on Monday and delivered a written and verbal protest over the detentions. The Ministry described the U.S. Diplomatic Security Service's treatment towards Turkish officers as "aggressive and unprofessional, contrary to diplomatic rules and practices". The ministry also demanded the U.S. to conduct a full investigation into the incident and provide an explanation.

In Washington, Turkish Ambassador Kılıç also accused U.S. authorities of not taking the necessary protective measures against protestors outside the Turkish Residence, in a speech at the 36th Annual Conference on U.S.- Turkey Relations. In response, at the same luncheon, Tom Shannon, the Under Secretary for political affairs at the State Department, said the protesters had a right to demonstrate outside the Turkish Residence, and the attack on these people were "deplorable."

"We can confirm the Turkish Foreign Ministry convoked our Ambassador to Turkey to discuss the violent incidents involving protestors and Turkish security personnel on May 16. As we noted previously, the conduct of Turkish security personnel last week was deeply disturbing. The State Department has raised its concerns about those events at the highest levels." she said.