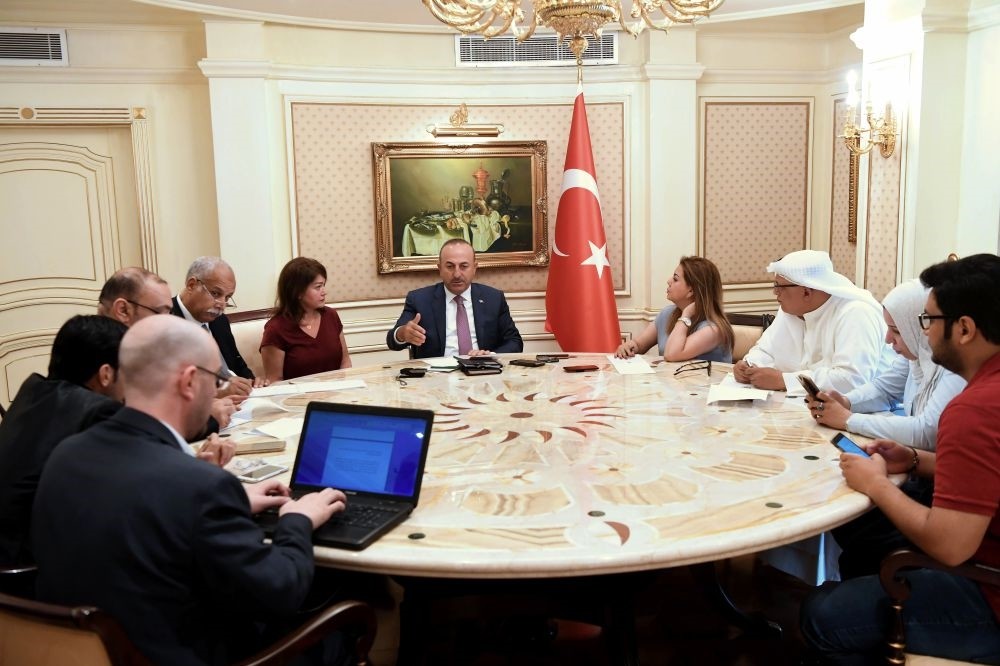 Turkish Foreign Minister Mevlu00fct u00c7avuu015fou011flu (C) attends a press conference in Kuwait City yesterday as part of his diplomatic tour for a solution to the Gulf crisis.
by Daily Sabah Jun 16, 2017 12:00 am

Following Turkey's intense diplomatic traffic and the U.S.'s military deal with Qatar, positive steps are signaled toward a solution to the Gulf crisis. However, the real deal breaker is expected to be said after the anti-Qatar axis convey official demands from Qatar

As the diplomatic rift in the Gulf continues, Turkey intensified its diplomatic efforts to mediate between Qatar and the Arab nations as the U.S. is pushing forward military contracts. On Wednesday, Qatar's defense ministry announced that Doha signed an agreement with Washington to buy $12 billion worth of F-15 jets. The contract is considered as the latest in a series of mixed messages from the U.S. as it attempts to navigate the Gulf diplomatic crisis. Ali Bakeer, an expert on Middle Eastern affairs, told Daily Sabah that Turkey's diplomatic efforts, combined with the U.S.'s military deal with Qatar, has helped to achieve a balance of power between the parties.

"The efforts will help and push the sides to negotiate with each other. Without these steps, Qatar was isolated by the anti-Qatar Gulf axis," Middle East expert Dr. Ali Bakeer said, adding, "However, we still need to wait for the Gulf states against Qatar to convey their specific of demands, as still this has not been delivered."

Commentating on the agreement, Qatari Minister of Defense Khalid Al Attiyah said that the deal underscores the "longstanding commitment of the state of Qatar in jointly working with our friends and allies in the United States."

Meanwhile the Pentagon said in a statement that the deal "will give Qatar a state of the art capability and increase security cooperation and interoperability between the United States and Qatar."

Last year the U.S. Congress agreed to sell fighter jets to Qatar, however, the agreement was signed in the middle of the ongoing Gulf crisis and just weeks after U.S. President Donald Trump inked a $110-billion arms deal with Saudi Arabia.

After his meetings Çavuşoğlu said that the crisis between Qatar and some Arab countries should be resolved "through peace and dialogue."

"The situation we have been going through this Ramadan is a really undesired one. There is a crisis between sister countries and there are some steps that directly affect people. We must absolutely overcome it. We need to overcome it through peace and dialogue," Çavusoglu said, underlining that Turkey was contributing to the peace process.

According to information obtained from diplomatic sources, Çavuşoğlu and his Kuwaiti counterpart discussed the meditation efforts and possible joint cooperation opportunities to restore stability in the Gulf region. Speaking to press members after the meeting, Çavuşoğlu said that Qatar was not keen on continuing the current diplomatic rift.

''They have clearly stated that the problem did not start from the Qatari side and they want to see evidence of the allegations from the Gulf countries," he said.

Explaining Turkey's position with regards to Qatar in the crisis, Çavuşoğlu underlined that Turkey was speaking with both sides to resolve the crisis.

''In this crisis, Turkey is maintaining an equal distance between both sides. But it doesn't mean that we are not going to tell the truth. Our statements are extremely balanced, we are only focused on solving the problem with goodwill,'' he said.

Meanwhile, Qatari Foreign Minister Mohammed bin Abdulrahman Al Thani said on his social media account on Wednesday that he appreciates Turkey for standing with Doha during the embargo against Qatar.

"We appreciate the sincere & just position taken by government and people of Turkey on illegal blockade imposed on Qatar," Thani said