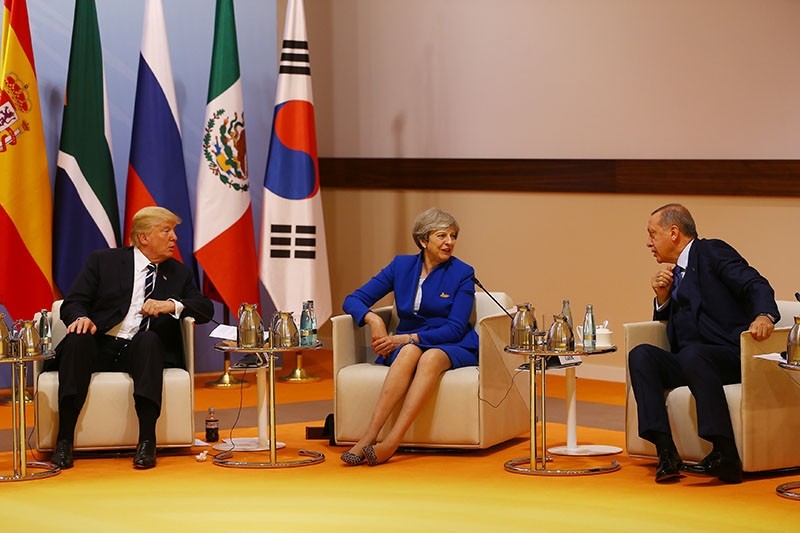 G20 member states and the EU must take stronger steps against terror groups, including the PKK and Daesh, as well the Gülenist Terror Group (FETÖ), President Recep Tayyip Erdoğan told leaders in a counterterrorism-themed meeting during the summit in Hamburg.

Calling terrorism is global problem, Erdoğan called on allied countries to increase cooperation against all the groups, and added that Turkey is simultaneously fighting the PKK, Daesh, the Syrian Kurdish People's Protection Units (YPG,) and FETÖ, during the two-hour, close- door meeting.

Erdoğan called on EU leaders in particular to take concrete steps against the financial activities of PKK terror groups in their countries, and drew attention to the FETÖ threat, which he underscored could eventually pose a danger to their countries as well, calling on them to extradite FETÖ suspects to Turkey.

On Friday, Erdoğan was greeted by German Chancellor Angela Merkel at the summit hall in Hamburg where she received G20 leaders ahead of the formal sit-in meetings with terrorism, global trade and climate change among the issues on the agenda as leaders gather under tight security.

Late Thursday, Erdoğan met with Merkel amid escalating tensions between the two countries, as Ankara has lashed out at Berlin for what it says is it turning a blind eye to FETÖ and PKK activities in Germany for their propaganda, recruitment, and funding activities. On Wednesday, in an interview with German weekly Die Zeit, Erdoğan said German authorities were tolerating PKK activities, although the group is also outlawed in the country. He renewed Ankara's demand that Berlin return PKK and FETÖ suspects for trial in Turkey and warned that as long as this does not happen, "Turkey will look at Germany as a country that is protecting terrorists."

After taking the traditional family photo of G20 leaders, following meeting on counterterrorism, Erdoğan also met with U.S. President Donald Trump on the sidelines, where the expected topics of talks were the extradition of the U.S.-based FETÖ leader Fetullah Gülen and U.S. support for the YPG in the fight against Daesh. At the meeting, Trump, Erdoğan and British Prime Minister Theresa May were sitting next to each other.

Tensions between Ankara and Washington have hit a historic low since former U.S. President Barack Obama's administration decided to partner with the YPG in the fight against Daesh despiteAnkara considering the group to be an affiliate of the PKK, which is listed as a terrorist group by the U.S., EU, and Turkey. The Trump administration did not change the previous administration's strategy in partnering with the YPG, which it recently supported with arms and other military equipment. Tensions were further triggered after the July 15 coup attempt in Turkey, when Ankara asked for Gülen's extradition from the U.S. Ankara claims that Washington has turned it into a political tool against Turkey, despite boxes of evidence sent to the U.S. supporting the case for Gülen's extradition.

On Friday, G20 leaders also held meetings on global growth and trade, sustainable development, climate and energy. Erdoğan was also scheduled on Friday to meet with the Japanese Prime Minister Shinzo Abe and the Italian Prime Minister Paolo Gentiloni, as well as the U.N. Secretary-General Antonio Gutterres, among others.

Among Erdoğan's critical meetings during the summit is talks with Russian President Vladimir Putin, expected to be held Saturday.

Turkey and Russia have recently increased cooperation, particularly in finding a solution to the Syrian crisis, as well on trade and energy related issues. Turkey and Russia have played a key role in the establishment of a nationwide cease-fire in the war-torn country, with the two countries agreeing on the evacuation of Aleppo in late December 2016. On the other hand, Ankara and Moscow recently completed technical details of a contract, in which Russia would sell its S-400 air defense systems to Turkey. Turkey has also made energy deals with Russia, as seen with the so-called TurkStream pipeline that would bring Russian gas to Europe, bypassing Ukraine.