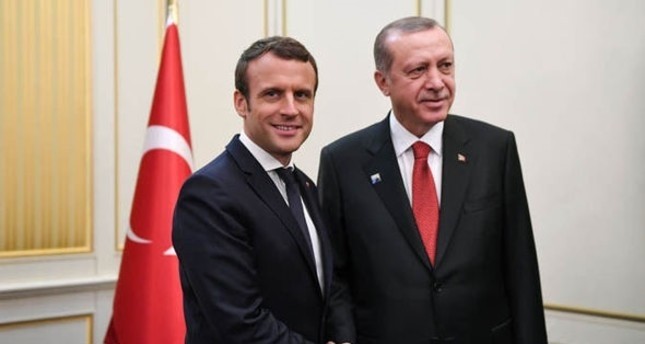 President Recep Tayyip Erdoğan held a phone conversation on Tuesday with his French counterpart Emmanuel Macron about counter-terrorism and recent developments in Syria and Iraq, according to a Turkish presidential source.

Erdoğan and Macron emphasized the importance of joint action against terrorism.

A statement issued by the Elysee Palace said Macron "reiterated his desire to continue the very close dialogue established with Turkey in the fight against terrorism and the search for an inclusive political solution for peace, stability and unity of the country [Syria]".​

Meanwhile, the statement added that Macron told Erdoğan of his "concern" about the situation of detained journalism student Loup Bureau, adding that the two leaders agreed to discuss the case again next week.

27-old Bureau was detained while crossing the border from Iraq on July 26.

According to the Anadolu Agency, he was found carrying pictures of himself with members of the YPG militia. A judge later placed him under formal arrest on suspicion of supporting a terrorist organization, the report said.

Turkey considers the People's Protection Forces (YPG), which is the main U.S. ally in the fight against the Daesh terrorists in Syria, as the Syrian offshoot of the PKK terrorist group.

Bureau's French lawyer, Martin Pradel, last week claimed that the allegations against his client were related to his involvement in producing a 2013 report for TV5 Monde television.

It was the second case in which Macron brought up the issue of a detained journalist in Turkey to Erdoğan. French photojournalist Mathias Depardon was released in June, a month after being arrested in southeastern Turkey. Whereas another French reporter, Olivier Bertrand, was expelled in November 2016.

Macron has come under increased pressure in recent days to act on Bureau's behalf too, with French journalists' unions and intellectuals calling for his release.