Others should put themselves in Turkey’s shoes over failed coup attempt, UK’s Duncan says 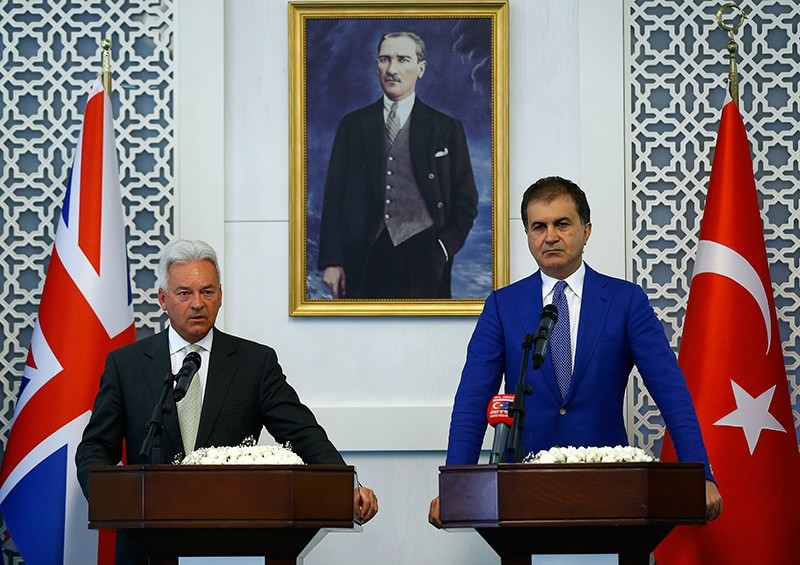 The international community should understand how "traumatic and seismic" the experience of the July 15 failed coup attempt has been for Turkey and its people, the U.K. Minister of State for Europe and the Americas, Alan Duncan, said Thursday.

"I said it before but I'll say it again. If this has happened in the U.K., it is the equivalent of the regiment of the army marching down the Whitehall, shooting people on Westminster Bridge, trying to kill the queen and the prime minister, bombing parliament while it was sitting, and taking over the BBC," Duncan said.

According to the U.K. minister, explaining the events of last year's July 15 in this manner helped people, especially of the U.K., understand what Turkey has experienced.

"I, and the U.K., have tried to explain to other countries and other ministers the need to understand how traumatic and seismic this experience was in Turkey and it threatened the entire stability and existence of the state," Duncan stated.

Duncan also said that the response to those who threatened people and government, and who were guilty of planning, plotting and implementing the coup attempt must be "tough and firm," but, at the same time, actions must be "fair and properly judicial."

During the night, Gülen-linked soldiers ran over people with tanks, directly shot at them and bombed many governmental buildings including the Parliament, the Presidential Complex and the headquarters of National Intelligence Organization (MİT).

Istanbul's iconic July 15 Martyrs' Bridge, known as Bosporus Bridge before the coup attempt, saw one of the bloodiest scenes of the night as many were killed on the bridge in addition to scores of wounded unarmed citizens who stood against the coup.

The terror group is also accused of orchestrating a long-running campaign to infiltrate Turkish state institutions, including the military, judiciary and police.

Meanwhile, EU Minister Çelik commented on reports that claimed Adil Öksüz, one of the suspected masterminds of the failed coup attempt, was spotted in Germany.

"The Adil Öksüz issue is very clear. We are friends with Germany, allies. We are expecting an attitude [from Germany] adequate to the historical depth of our relations and today's partnership," Çelik said, adding that no friends of Turkey's could harbor a killer.

Çelik also responded to German Chancellor Angela Merkel's refusal to enter into talks with Ankara on upgrading the existing Customs Union, saying her remarks were "unfortunate."

According to Çelik, bilateral setbacks with some particular EU member states may exist, but they should not harm Turkey-EU relations in any way.

"If this is the case, the EU will stop being a political union, and will turn into a federal union. This is an issue related to the recent tension between Germany and Turkey. The EU institutions should not allow Germany to make it an EU issue," Çelik added.

The EU minister also said that upgrading the Customs Union was not a "one-sided desire," adding that the offer initially came from the EU itself.