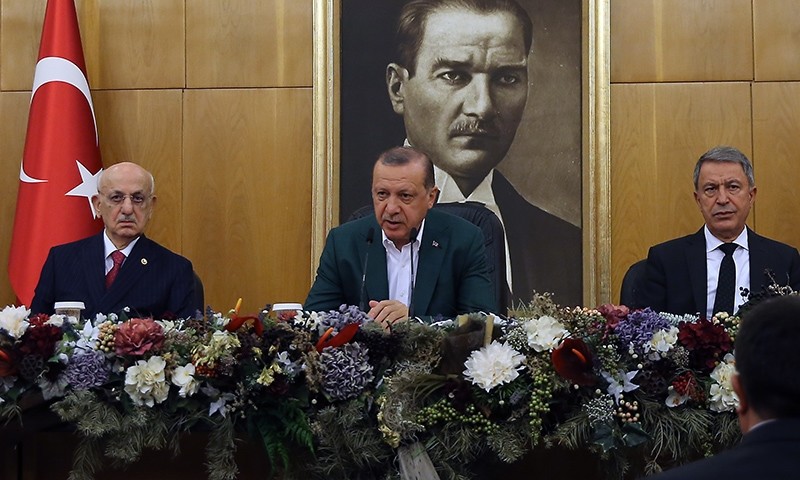 President Recep Tayyip Erdou011fan (center) holds news conference ahead of his departure to New York to attend the 72nd session of the UN General Assembly (AA Photo)
by Daily Sabah Sep 17, 2017 12:00 am

Speaking to reporters at a news conference in Istanbul's Atatürk Airport ahead of his departure to the U.S., Erdoğan said that he will exchange views with al-Abadi, whom he said shares the same views as Ankara regarding the referendum.

"We share a 350-kilometer-long border with them [Iraq]. Our kin and co-religionists live there and they vice versa. In reality, we are members of the same civilization" Erdoğan said, noting that Turkey is against the division of its neighbor along ethnic or religious lines. He reiterated once again Turkey's support for preserving Iraq's territorial integrity.

In June, KRG President Barzani announced that they would hold a referendum on independence from Baghdad on Sept. 25. The head of the Iraqi Turkmen front Ershad Salihi said the independence referendum in Iraqi Kurdistan that is planned to be held on Sept. 25 would not benefit any group in the region. Salihi said in August that they do not accept that the upcoming referendum by the KRG be held in regions where Turkmens constitute the majority. He said earlier in June "The upcoming KRG referendum that got a negative reaction from both regional and local actors would benefit nobody. This referendum will lead the country to new chaos no matter what."

Ankara has opposed the independence vote, calling it a "grave mistake" that would "result in undesired results" for regional peace and security.