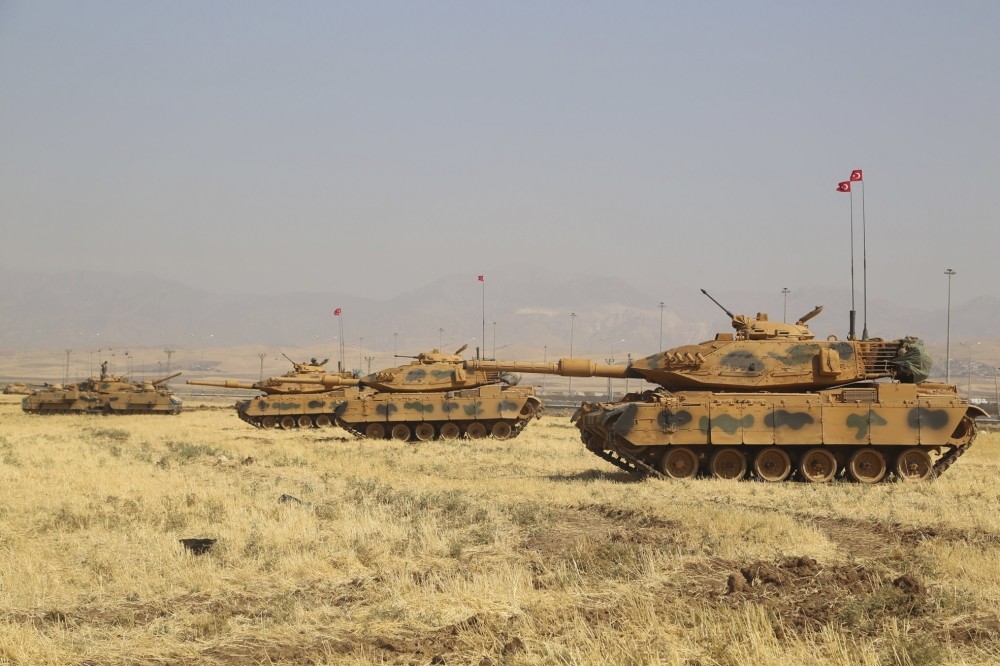 Turkish tanks are seen near the Habur crossing gate between Turkey and Iraq during a military drill on Sept. 18.
by Daily Sabah Sep 22, 2017 12:00 am

Turkey's top security body, the National Security Council (MGK), convenes today to make Ankara's final decisions on the strategy for the outcome of the referendum, which the Turkish government strongly opposes

Ankara is gearing up for the latest preparations in the face of the Kurdistan Regional Government's (KRG) referendum on Sept. 25. The National Security Council (MGK) will convene today to discuss which steps may be taken in retaliation against the independence vote. The historic MGK meeting will focus on the actions to be taken by the Turkish state in the aftermath of the referendum.

Various media outlets have so far contended that a cross-border military operation and sanctions may be on the way if the referendum takes place in spite of calls from President Recep Tayyip Erdoğan for KRG President Masoud Barzani to call off the vote. Speaking at the Bloomberg Global Business Forum in New York, President Erdoğan said the sanctions that Turkey may impose and the steps that may be taken after the referendum will be discussed during the meeting.

"We will convene the [MGK] on Friday in Ankara where we will reach a decision regarding the scope of sanctions to be imposed after the referendum, to be discussed further during the MGK meeting," President Recep Tayyip Erdoğan said.

The president expressed his hope that Barzani will change his mind in regards to holding the referendum.

"I hope that Mr. Barzani and his staff will revise this wrong decision and that the regional government will continue its work," he said.

Despite pressure from international and regional powers, the KRG has remained adamant in moving forward with the referendum, with Barzani recently stressing that it would take a written guarantee to postpone the vote.

In the face of Barzani's demands, Iraqi Prime Minister Haidar al-Abadi said that the referendum will be rejected not only today but also in the future.

"Kurdistan's referendum will be rejected; whether it takes place now or in the future," al-Abadi told reporters late Tuesday. "What [Baghdad] now suggests is that the referendum be canceled rather than postponed."

An expert on Middle East affairs, Can Acun, said that the pressure being placed on the KRG and Barzani is mounting with each passing day.

"I think that Irbil has been trying to find an honorable way out [of the situation]. At the very least, Barzani wants to get something out of the negotiations before canceling the referendum," Acun explained.

Commenting on the issue, Abdullah Ağar, a national security expert, said that the military drill sends a loud and clear message to Irbil.

Meanwhile, Acun also said that Ankara and Irbil have had good relations, based on a win-win policy.

"However, it was a disappointment for Turkey that the KRG is proceeding with such a step without taking Ankara's sensitivities into consideration. Turkey's military drill is a message, but I do not believe the Turkish military will target the KRG directly," he said.

Meanwhile, recent analysis by the Foundation for Political, Economic and Social Research (SETA) revealed that Turkey would be able to adjust to the new political realities after a possible KRG referendum result. The analysis added that Ankara is capable of addressing the challenges in the region if the referendum goes through.

SETA's report highlights that relations with the KRG were burgeoning in fields such as energy and security until the latter's controversial decision to hold an independence referendum.

Ankara and Irbil also worked together in confronting security threats imposed by the PKK terrorist organization and Daesh. The report emphasized that Turkey has provided help to the KRG in its fight against Daesh, while the KRG has contributed to Turkey's counterterror operations against the PKK in the region.

According to the report, Turkey's compartmentalization of the planned referendum away from its energy, security and trade interests stresses the significance of the territorial integrity of Iraq.

Ankara strongly believes that the referendum could potentially stir further conflicts in Kirkuk and the region. Even though Ankara has enjoyed beneficial relations with the KRG in the fields of security and energy, the report reiterated that Ankara is against the participation of the Kirkuk province in the KRG referendum.

The disputed, oil-rich province of Kirkuk is not part of the KRG according to the Iraqi constitution and Turkey also underscored that it would not allow a fait accompli by the KRG.

Commenting on the days following the referendum, the think-tank's report stated that many do not expect an immediate declaration of independence, suggesting that it could take years to obtain one.

The report said that President Mahmoud Barzani's main objective in holding this referendum could be to strengthen the KRG's position regarding negotiations with the Iraq central government. The referendum results will be utilized as a symbolic success by the KRG, the report suggested.

On the other hand, the report contended that if the KRG moves forward with a declaration of independence, Turkey will seek to secure its trade, energy and security interests while also seeking to ensure the safety and security of Turkmens in the region, preserving ethnic pluralism in Kirkuk while insisting on the preservation of Iraq's territorial integrity.

"A potential new conflict in the region would hamper the KRG's ability to meet security challenges, conduct business and export its energy resources. In such a scenario, a weakened KRG would lose its ability to be a guarantor of stability in northern Iraq," the report stated. * Contributed by Yunus Paksoy