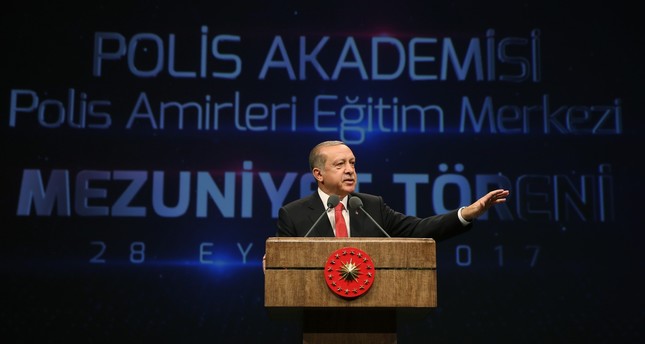 Turkish President Recep Tayyip Erdoğan warned the Kurdish Regional Government (KRG) that the controversial independence referendum will result in failure as uncertainty reigns the contested provinces of the Kurdish region.

Speaking at the Police Academy graduation ceremony at the Presidential Complex, Erdoğan said the KRG is throwing itself into chaos with its leap toward independence, while it was already enjoying privileges with the oil trade.

"Turkmens in the region are under persecution, their rights are not being taken into consideration. If we are standing against the recent developments in northern Iraq, it is because we want the best for Arabs, Kurdish people, Turkmens and other ethnic groups there."

The illegitimate referendum saw Iraqis in KRG-controlled areas -- and in a handful of territories disputed between Irbil and Baghdad, including ethnically mixed Kirkuk and Mosul -- vote on whether or not to declare independence.

Ankara recently voiced its grave concerns regarding the status of Kirkuk and the future of Turkmens. "Just as we liberated Jarablus, al-Rai and al-Bab from Daesh in Syria, if need be we will not shy away from such steps in Iraq," Erdoğan said.

Foreign Minister Mevlüt Çavuşoğlu also pointed to a military operation if Turkmens are harmed. "The military option depends on developments. If there were to be any action against our Turkmen brothers and sisters, then right away."

Meanwhile, Prime Minister Binali Yıldırım told reporters Thursday that concrete steps are being taken against KRG in terms of sanctions and that Turkey is working cooperatively with Iraq and Iran regarding the matter.

The Turkish Foreign Ministry also issued a notice barring representatives of the autonomous government in northern Iraq from returning from Irbil.

The region's thirst for independence disturbed the neighbouring countries as a wide range of threats were made by the Iraqi central government, Turkey and Iran. Barzani's bid also fell short in garnering the Western support as U.S. and European allies advised the KRG to postpone the vote and focus on the fight against Daesh.

The extend of the pressure that would be put on the KRG from the Turkish side is still unclear. The regional government relies heavily on oil revenue and Turkey enjoys an enormous leverage as its exports of oil drilled from Kirkuk are piped through the port of Ceyhan.

Shutting the Habur border gate, the KRG's gateway to the world, and imposing economic sanctions would have harrowing effects. However, it stands out as an unlikely response in the long-term in a region where a large number of Turkish companies and people invested in heavily.

Share on Facebook Share on Twitter
Previous in Diplomacy The exodus from a menacing volcano on the Indonesian tourist island... Next in Diplomacy An official from the ruling Kurdistan Democratic Party and former...
DAILY SABAH RECOMMENDS