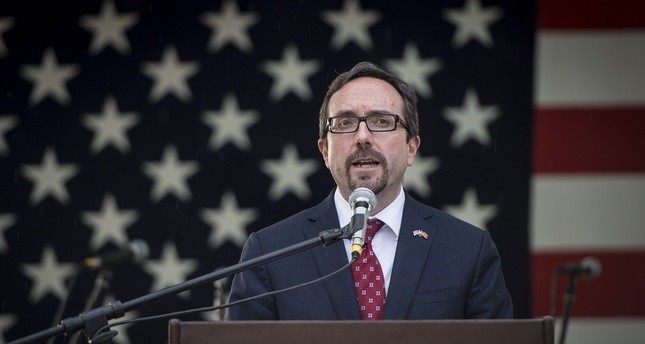 The decision to halt visa services in Turkey was taken with "great sadness," the United States Ambassador to Ankara John Bass said in a statement released late Monday.

The decision to halt visas came after Metin Topuz, an employee of the U.S.' Istanbul Consulate General, was arrested over suspicions of supporting and/or being a member of the Gülenist Terror Group (FETÖ).

"We realize that the suspension of visa services will bring inconvenience to people. We hope it will not last long, but at this time we can't predict how long it will take to resolve the matter," the diplomat said.

Touching upon Topuz's arrest, he said: "Despite our best efforts to learn the reasons for his arrest, we have been unable to determine why it occurred or what, if any, evidence exists against the employee."

"The employee works in an office devoted to strengthening law enforcement cooperation with Turkish authorities and ensuring the security of Americans and Turkish citizens. Furthermore, our colleague has not been allowed sufficient access to his attorney," he said.

He went on to say that the primary duty of Topuz was "strengthening law enforcement cooperation between the United States and Turkey."

Topuz has been linked to a number of FETÖ suspects, including police commissioners and former prosecutor Zekeriya Öz, a fugitive accused of attempting to overthrow the government through the use of force. He is charged with espionage and violating the constitutional order, a terrorism charge.

"Speaking to and traveling with Turkish police was a part of his regular duties and the Turkish government has not shared any information to indicate the employee was involved in any illegal activity," Bass alleged.

Adding that the arrest may have been carried out in order to "disrupt the long-standing cooperation between Turkey and the United States" by "some officials," he stated that this would "put the people who work with, and work at, and visit our diplomatic facilities at risk."

"Our local staff members are Turkish citizens, and we, of course, expect them to observe Turkish law like any other citizen of the Republic. They have a right to expect Turkish authorities will provide appropriate legal protections and due process," Bass said, pointing to the presumption of innocence until proven guilty.

An embassy statement said: "Recent events have forced the U.S. government to reassess the commitment of the Government of Turkey to the security of the U.S. Mission facilities and personnel."