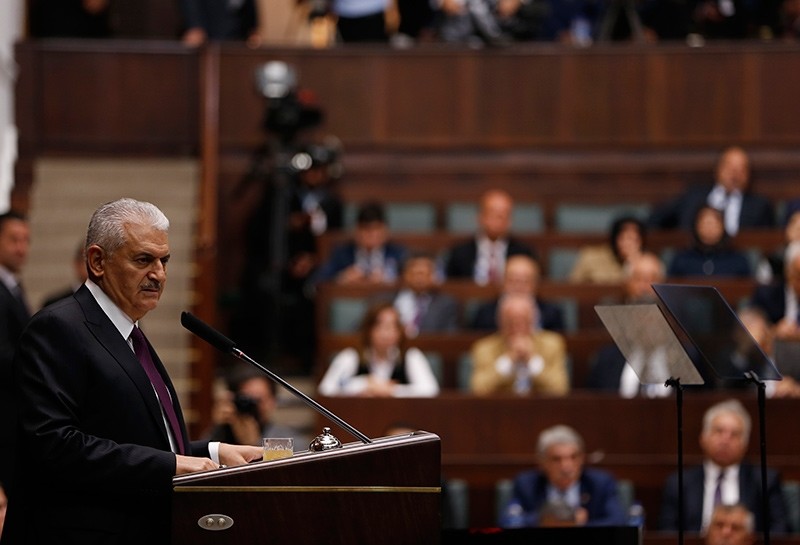 Turkey will not ask for permission from the U.S. to detain or prosecute suspects, Prime Minister Binali Yıldırım said Tuesday, as he criticized the NATO ally for suspending visa applications over the detention of a terrorist suspect.

Speaking at his party's weekly parliamentary group meeting, Yıldırım said that the U.S.'s attitude regarding the detention of a consulate staff for alleged links to the Gülenist Terror Group (FETÖ), contradicts the spirit of alliance.

"There is rule of law in Turkey and if someone from the U.S. diplomatic mission commits a crime he/she will not have any privileges [to avoid prosecution]" Yıldırım said, adding that U.S. authorities never asked for Turkey's permission when they detained a state-owned bank's deputy general manager.

Yıldırım was referring to the arrest of Deputy General Manager of International Banking at Halkbank Mehmet Hakan Atilla by the U.S.

He noted that it is shameful for the U.S. punish citizens of allied countries and added that Turkey retaliated in kind to their action.

"The issue needs to be immediately resolved" the prime minister said, adding that Turkey is open to all channels of communication with all countries.

Yıldırım also said that around 80 percent of Turkish people do not like the U.S. and noted that the latter has failed to cooperate with Turkey following the FETÖ-led failed coup last year, while he also criticized U.S. support for terrorist PKK's Syrian offshoot People's Protection Units (YPG).

"If the U.S. wants our partnership to continue then it needs to give up support for the YPG in Syria, who are the cousins of the PKK terrorists" Yıldırım said, adding that it is not befitting for a partner to cooperate with enemies.