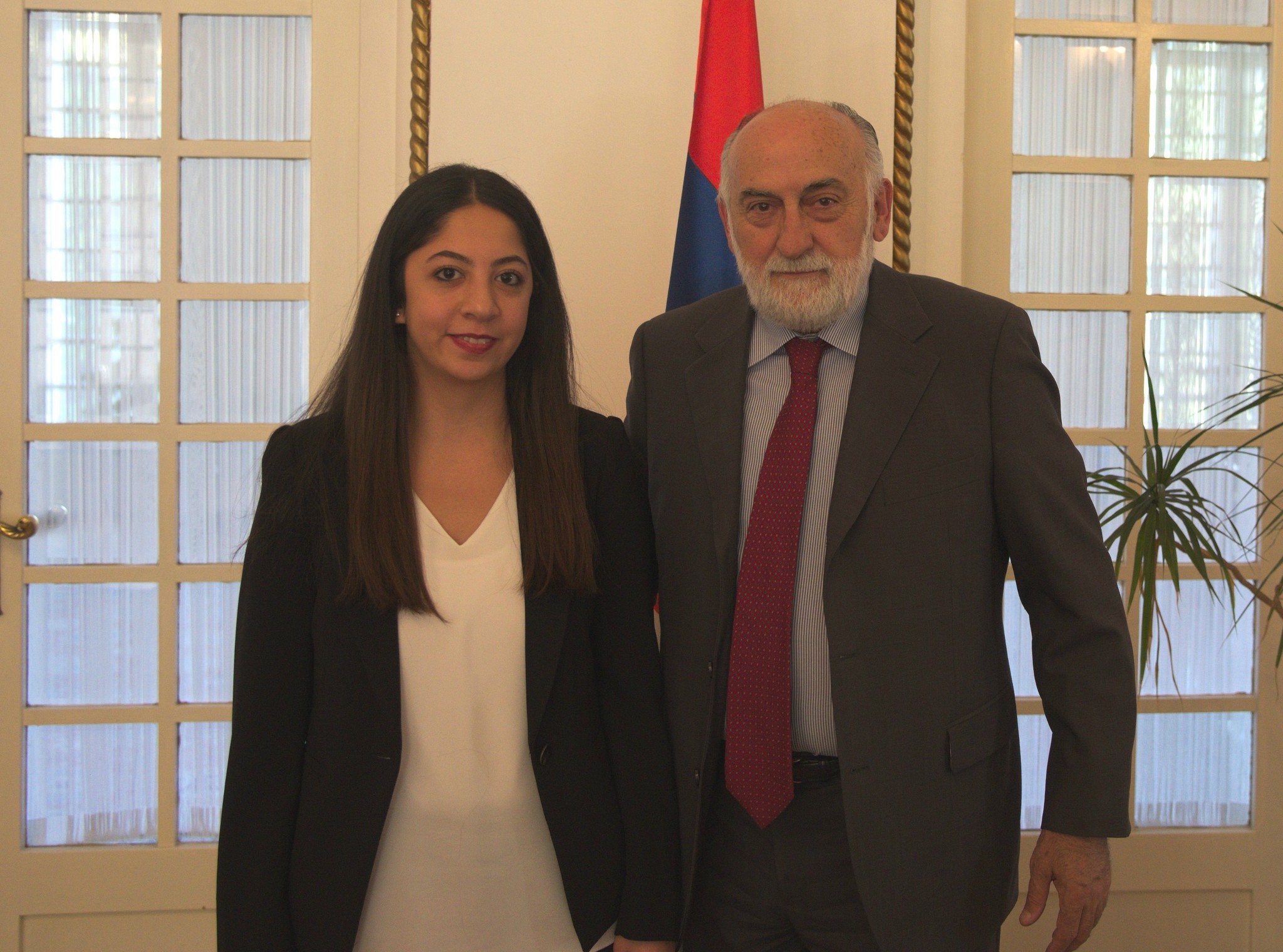 Daily Sabah's u00d6zgenur Sevinu00e7 with Serbian Ambassador Danilo Vucetic. He told DS that Erdou011fanu2019s visit regarded with high importance by Serbia, not only for development of bilateral relations, but also for strengthening of peace & stability in region.
by Özgenur Sevinç Oct 21, 2017 12:00 am

"President Erdoğan and his numerous delegations of ministers and businessmen were received in Serbia in what is regarded as a first-class political event of high importance, not only for the development of bilateral relations, but also for the strengthening of peace and stability in the region," Vucetic told Daily Sabah, stressing the significance of the visit.

"President Erdoğan made a two-day visit [to Serbia], which tells us a lot about mutual interests in terms of improving relations," the ambassador said, adding an unusually warm and friendly atmosphere was evident during the visit and it received widespread media attention.

As part of his trip, Erdoğan visited Novi Pazar, a predominantly Muslim region in Serbia, where he was warmly welcomed along with Serbian President Aleksandar Vucic. In a speech at Novi Pazar, Erdoğan said: "With our infrastructure and superstructure works, I believe we are launching a new era between Turkey and Serbia," calling for unity in the Balkans.

Vucetic underscored that relations between Turkey and Serbia have been institutionalized with the signing of the Joint Political Declaration for the establishment of a High Level Cooperation Council, indicating that relations have reached the highest level possible. The council will hold annual meetings alternately in Serbia and Turkey. Erdoğan signed the declaration during while he was in Serbia from Oct. 10 to Oct. 11.

Vucetic said that the unanimous conclusion taken from this visit, as the two presidents pointed out, is that Serbia and Turkey are two key countries that have crucial influence in the region.

"This visit is solid ground for enriching cooperation even more and it has shown that all political conjecture has been realized for the improvement of cooperation in the areas of the economy, education, culture and tourism," Vucetic said.

Underlining that the improvement of economic ties between Belgrade and Ankara was on the agenda for the visit, Vucetic said: "The expectations and the goal is to raise trade volume, which is currently around $800 million, to $1 billion in the shortest time possible, ultimately raising it to $3 billion in the future." During the visit, the two countries revised their free trade agreement and other agreements were signed amid efforts to further increase the level of cooperation.

"There are many possibilities for further improving cooperation, especially in regard to the participation of Turkish companies in the construction of infrastructure in Serbia regarding the country's road network, energy corridors and tourism investments," Vucetic said, speaking about the various areas for potential cooperation between the two countries.Highlighting that tourism is of utmost importance for enhancing bilateral ties, Vucetic said that Serbia is encouraged by the fact that the number of Turkish tourists visiting Serbia has significantly increased. He said that Turkey is one of the favorite destinations for Serbian tourists and contended that the exchange of high numbers of people in both ways reflects the mutual interest of both countries.

He also stressed the cultural aspect of Turkish-Serbian relations, saying that over the last few years, Turkish television productions have gained more recognition among Serbian audiences, signaling that they are becoming more familiar with various aspects of Turkish history, cultural traditions and way of life.

As the Serbian National Theater in Belgrade attended international theater festivals in Bursa and Adana, Vucetic stressed that he has seen the excellent reception of their performance by Turkish audiences, pointing out that this contributes to the strengthening of cultural relations as well.