Turkey, Iraq open to nothing less than annulment of KRG referendum 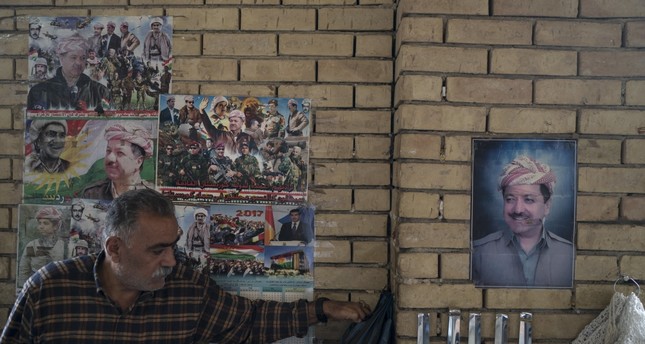 Following the Sept. 25 independence referendum, despite warnings from regional powers as well as the West, the KRG suffers a big disappointment since it miscalculated the international results, ending up isolated and with no support.

The developments following the independence referendum caused great disappointment in the KRG, leading Irbil to take steps back, offering to freeze the results, which both Turkey and Iraq rejected, demanding a full annulment

Turkey is siding with the Iraqi central government regarding the Kurdish Regional Government's (KRG) offer to freeze the referendum results, saying that although it is an important step, an annulment is definitely necessary to end the crisis. According to experts, the KRG has experienced a huge disappointment since the referendum, failing to accurately calculate Turkey's stance on the matter and losing its alliance with Ankara, deeply weakening the Kurdistan region. According to Turkish journalist Mehmet Akif Ersoy, the decision to freeze is related with the movement of the Shiite militia group, the Hashd al-Shaabi, as well as economic problems.

"I was recently in the Kurdistan region of northern Iraq. There are no products left in the shops in Irbil. There is an excessive number of officers yet the government cannot pay their salaries. They also lost the oil wells [in Kirkuk] to Baghdad. So, they decided to offer to freeze the referendum [results] just to see if they can [effectively] convince Iraq and Turkey to side with them. However, that did not work," he said, adding that losing Turkey's alliance has gravely weakened the KRG. Speaking on recent developments regarding the KRG's offer to freeze the independence referendum yesterday, Turkey's Minister of Foreign Affairs Mevlüt Çavuşoğlu said the KRG's offer is an important yet insufficient step.

"[KRG President Masoud] Barzani thought that he would have a very powerful hand [to bring to] the table in holding this referendum but it seems that he is now in a much weaker position than he initially started off. By holding the referendum, Barzani divided and dispersed our Kurdish brothers in Iraq. It is important that the KRG has taken steps backward but it is not enough. The referendum has to be annulled," Minister Çavuşoğlu said.

"Although Turkey has yet to impose serious sanctions on the KRG, it lifted the protection shield that it has been providing to the KRG for some time now. This has tremendously weakened the KRG. As a result, they are suffering the punishment of not taking to heed the advice of states in the region. They try to denigrate Iran and Iraq to Turkey by referencing their past relations with the PKK, saying that Turkey cannot trust these countries due to national security reasons and should align with them instead," Ersoy said, adding that by lifting the security shield, Turkey has shown them how powerful it is as a regional power.

The premier's written statement came one day after the KRG proposed an immediate cease-fire, the halting of all military operations and the freezing of the referendum results. "We warned them [the KRG] not to hold the poll but it was to no avail," he said. "Our ability to impose federal authority over all Iraqi territory is a victory for all Iraqi citizens," he added. "We plan to bring all these areas under the authority of the [Iraqi] state."

In a statement released on Wednesday, the KRG proposed an immediate cease-fire, the halting of all military operations and the freezing of the results of the referendum conducted in Iraqi Kurdistan.

Position over Iraq's territorial integrity is same as before

According to ESMEDYA Digital Group Editor-in-Chief Yusuf Özhan, although Barzani's statement on freezing the referendum was unexpected, the Iraqi constitution is quite clear on this issue and states that the referendum is illegal, which means that it should be annulled. "Turkey's position on the issue has been very clear from the very beginning as well," Özhan said, indicating that Turkey supports the territorial integrity of Iraq no matter what and also aims to maintain the counter-terrorism fight, not only against Daesh but also the PKK terrorist organization.

Iraqi Prime Minister al-Abadi arrived in Ankara on Monday to hold talks with President Recep Tayyip Erdoğan and Prime Minister Binali Yıldırım over the crisis with the KRG. "Our wish is that Iraq will rise again from the ashes and from destruction. We will lend our support for this and take the steps necessary to ensure the peace and security of the region," Erdoğan said during a joint press conference with al-Abadi.

Following his visit to Turkey on Monday, the Iraqi prime minister traveled to Iran and met with Iranian Vice President Eshaq Jahangiri. The two leaders emphasized the importance of cooperation between Tehran and Baghdad, while Iran congratulated Iraq for its success in protecting its territorial integrity.

Özhan pointed to the huge disappointment that has emerged on the side of Barzani supporters in the wake of the referendum. "They are in a psychosis. When they failed to find what they had hoped for, they started to burn American and Turkish flags. Yet, this disappointment is not a surprise. Every actor in the region, including the U.S. and Turkey, tried to convey the possibility of these results beforehand but they did not listen," he expressed.

Ankara had forged close ties with the KRG but had urged officials in Irbil not to hold the vote, warning of consequences that would isolate the region. Turkey closed its airspace to flights to and from northern Iraq, saying that Turkish officials were considering closing border gates to the region as further reprisal. Ankara stressed that cooperation with Baghdad will continue and all necessary precautions will be taken for Turkey's national security.

Echoing Özhan, Ersoy also underlined the tight situation that the people in KRG suffer. "There is an incredible sense of disappointment. They are very demoralized since they have lost the support of Turkey, which was the country that the KRG was closest to," he added.

Meanwhile, alternative routes between Iraq and Turkey have begun to be discussed in order to bypass the potential interference of the KRG,which is located in the middle of the two countries. "The management of the border gates belong to the central government of Iraq. We talked about a new route to the west of the Habur Gate," Prime Minister Binali Yıldırım said yesterday during his meeting with Prime Minister al-Abadi. Regarding the KRG's offer to freeze referendum results, Yıldırım said time has proved that Turkey was right on the issue. "It is obvious that the decision they will take will not be able to correct the damage they have caused," Yıldırım said.

The referendum was highly criticized by not only regional powers but the West as well, including the U.S., with many warning the KRG crisis could distract from Iraq's ongoing fight against terrorism and further destabilize the already volatile region. "They did not foresee that the West and the U.S. would let them down so quickly. They say that the U.S. has stabbed them in the back," Ersoy said regarding the issue. Still, on Wednesday, the U.S. announced its support for offers from the KRG to immediately halt military operations and start open dialogue.

"We welcome the [KRG] statement declaring an immediate cease-fire and the [halting of] military operations. Peace and dialogue are the proper steps forward," U.S. State Department spokesperson Heather Nauert said in a tweet. "Certainly, continued fighting does not lead any side to victory, but it will drive the country towards disarray and chaos, affecting all aspects of life," the statement continued.

The timing of the controversial Sept. 25 independence referendum held in the KRG and areas contested by Baghdad was widely criticized by KRG opposition parties and neighboring countries, which accused President Barzani and his ruling Kurdistan Democratic Party (KDP) of trying to raise their declining popularity with the referendum. The loss of Kirkuk and other contested areas has resulted in a new political debate in the KRG, with each party blaming the others for the aftermath.

"Although the KRG is in a bad situation with this referendum process, the biggest harm has been done to the KDP. Barzani is basically a politically dead man right now. The insurrection within the KDP is expected," Ersoy said, adding that the annulment of the referendum would still mean that they are finished politically.

"However, [the KRG] thinks that if they cancel the referendum, they could lose their political base entirely. If they cancel it, they would be finished politically. Therefore, terminating it would be the last option for them," Ersoy added.

Özhan, on the other hand, said Barzani's loss has become Talabani's gain, adding that the capital of the KRG is shifting from Irbil to Sulaymaniyah.

Share on Facebook Share on Twitter
Previous in Diplomacy Prime Minister Yıldırım yesterday said that Turkey's bilateral relations... Next in Diplomacy Relations between Turkey and Ukraine have not been affected by the...
DAILY SABAH RECOMMENDS