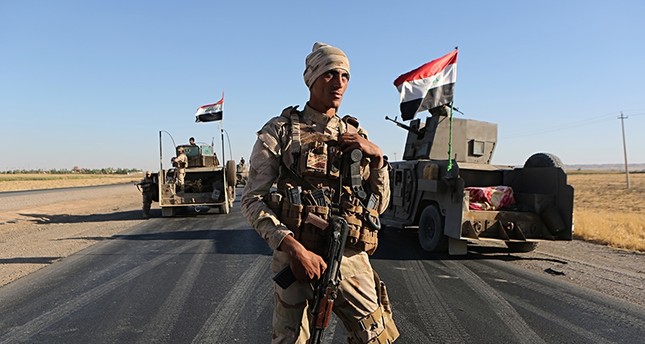 In this Oct. 19, 2017 file photo, Iraqi security forces gather outside the KRG-held city of Altun Kupri on the outskirts of Irbil, Iraq (AP Photo)
Related Articles

A former French diplomat acknowledged that the west misled Kurdistan Regional Government (KRG) President Masoud Barzani regarding the independence referendum, which led to an ongoing crisis and the resignation of Barzani, amid capture of Kirkuk by central Iraqi forces.

Speaking to Habertürk daily, French Consul General to Irbil Frederic Tissot admitted that Western countries misled Barzani with their support for the referendum, a criticism that was made by President Recep Tayyip Erdoğan after a picture of Barzani with western diplomats was released.

Erdoğan had assumed that Barzani was encouraged by the West and criticized them for supporting the referendum, which would have consequences for Iraq's territorial integrity and stability in the region.

"Yes, we [the west] misled him [Barzani]… Look at the implications of the results of the referendum for the Kurdish people!" Tissot said, adding that the analyses and data used to support the referendum were erroneous.

"This is no longer an honor for me, it's a shame" the French diplomat added.

The loss of Kirkuk was one of the most significant tragedies for Kurdish people, Tissot said, noting that it was the first time Kurdish people lost Kirkuk since 1920s.

"And now what is even worse is that it seems impossible to recapture Kirkuk" he added.

He highlighted that it would not be appropriate if Barzani's son or nephew take his place after he steps down.

Tissot also claimed that one of the greatest mistakes of Barzani was that he did not make a written agreement with the U.S. during the referendum process and avoided U.S. calls to delay the referendum.

KRG President Barzani insisted on holding a referendum despite many warnings from Ankara at the cost of Irbil and the region.

Baghdad, Turkey, Iran, the U.S., and the U.N. have all spoken out against the referendum, saying it will only distract from the ongoing fight against Daesh and further destabilize the region.

Turkey and Iraq conducted joint military exercises near the border, while Turkey also warned KRG of sanctions and further repercussions.

Share on Facebook Share on Twitter
Previous in Diplomacy The Foreign Ministry condemned terror attacks in Afghanistan that... Next in Diplomacy Tensions between Germany and Turkey are holding up planned defense...
DAILY SABAH RECOMMENDS