Turkey denies assuring US over cases against suspects in visa spat 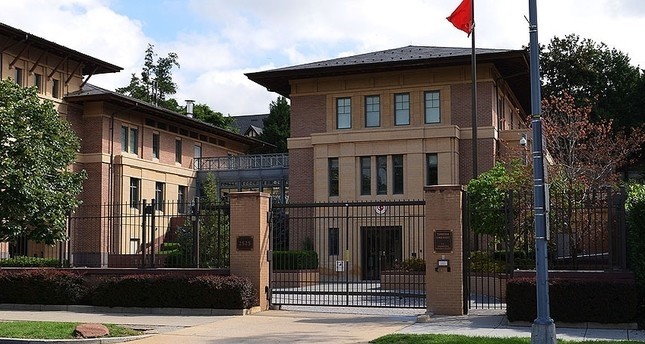 The Turkish embassy in Washington denied that Turkey had given assurances to U.S. authorities about ongoing cases in the country.

The statement came after a statement issued by the U.S. embassy in Ankara, which said that U.S. received initial high-level assurances from Turkey that there were no additional local employees of U.S. missions under investigation.

"Turkey is a state of law and our government cannot provide any assurances regarding files that are subject of ongoing legal processes," the Turkish embassy said in the statement.

"No foreign mission personnel has been subjected to legal investigation for performing their official duties in Turkey. The personnel in question employed by the U.S. has been the subject of a judicial process not because of his official duties but due to very serious charges against him," the embassy went on to say, pointing to Metin Topuz, a longstanding U.S. consulate employee and a Drug Enforcement Administration (DEA) agent at the Istanbul Bureau, arrested over ties with the Gülenist Terror Group (FETÖ).

"On the other hand, at the meeting held in Ankara on October 18 with the participation of Turkish and U.S. officials, the two sides agreed on enhancing information sharing on a mutual basis concerning judicial matters and consular cooperation."

In response to the U.S. embassy's statement, which said "the security posture in Turkey has improved efficiently to resume services," the Turkish embassy said that the remarks do not "reflect the truth."

"The reference to the security situation in the Embassy's statement does not reflect the truth, and is considered odd since Turkey has taken all the necessary measures for the security of all diplomatic and consular missions in Turkey, including those of the U.S., and as the U.S. side stated at every occasion that there is no need for additional measures," the embassy said.

Regarding Turkish citizens detained in the U.S., the embassy said that Turkey "has very serious concerns."

"Turkish officials will continue to engage with their American counterparts to seek a satisfactory resolution of these cases," the embassy concluded.