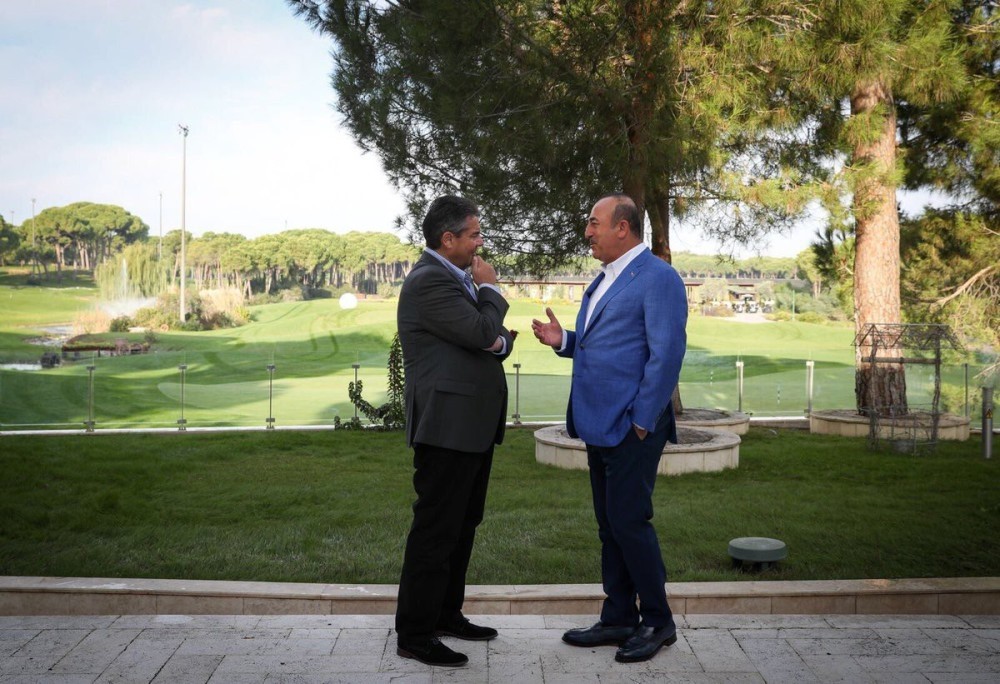 The reconciliation between Ankara and Berlin accelerated with the meeting of the countries' foreign ministers last week. The German Foreign Ministry spoke to Daily Sabah and confirmed the efforts of recovering ‘lost trust' and aim to bring momentum to the bilateral relations

It was a warm and sunny day in Antalya on Nov. 4 when photos of the meeting between Foreign Minister Mevlüt Çavuşoğlu and his German counterpart, Sigmar Gabriel, circulated in the media. The encounter was unexpected and intriguing. The photos showed the casually dressed foreign ministers in an informal and friendly conversation with a golf green in the background.

"We met with German Foreign Minister Sigmar Gabriel in Antalya, talked about the difficult issues between our countries and the expectations," Çavuşoğlu said on his Twitter account. Ten minutes later, the German Foreign Ministry shared a similar post. At a time when ties are at a historic low, the meeting was seen as an encouraging step.

The conciliatory meeting came after judicial decisions to release from Turkish custody German national Peter Steudtner and another German citizen, whose name was not disclosed by Berlin or Ankara. Furthermore, on the same day, German police intervened in a PKK demonstration in Düsseldorf and detained several people.

Following months of squabbles and heated exchanges, Ankara and Berlin may have slightly changed their attitudes, if not entirely. Indeed, the willingness for change, the possibility of creating a new roadmap and turning a fresh page in ties seems evident on both sides.

The German Foreign Ministry told Daily Sabah that there have been "some attempts in recent weeks to normalize bilateral relations." The high-level official, who asked to remain anonymous, said the two foreign ministers talked about "how the lost trust can be rebuilt."

It may not be plain and simple. The path leading up to the lost trust was bumpy, and the two countries clashed diplomatically more than once. The alleged lack of German solidarity with Turkey in the wake of the July 15, 2016 coup attempt did not help the cause, either.

The dangerously strained ties prior to the April 16 constitutional referendum in Turkey led to serious repercussions. In July, the very same Gabriel that met Çavuşoğlu last week for a reconciliatory effort, announced a series of economic sanctions against Turkey. The relations then hit rock bottom.

However, the mood in Ankara suggested that relations would normalize following the Sept. 24 German elections. The positive developments over the course of the past couple of weeks may be a turning point.

"It will not be easy, and it will take time," the senior German Foreign Ministry official said. That being said, the situation is not as grim as it was months ago. "Conversations are a good start," added the official.

President Recep Tayyip Erdoğan on Thursday voiced the same criticism at a gathering in Ankara. "Look, they cannot take shelter in Turkey anymore. They are now wandering around the streets of Berlin," he said, reiterating his claim that Germany has become a safe haven for terrorists fleeing Turkey.

In addition to the PKK matter with Berlin, Ankara places great emphasis on Gülenist Terror Group (FETÖ) fugitives. FETÖ's German imam, Ercan Karakoyun, said in an interview with the German newspaper Die Zeit in July: "The movement [FETÖ] cannot survive in Turkey. Germany is to become the new center."

Around 600 Gülenist public servants and high-ranking military officers are estimated to have sought asylum in Germany since the coup attempt. The number may climb even higher in the future.

"Sadly, FETÖ carries out anti-Turkey activities using Europe and Germany. We want them to be extradited to Turkey within the framework of legal obligations, including its leader [Fetullah] Gülen. These are our expectations of Europe and the U.S.," presidential spokesman İbrahim Kalın said in July.

On the other hand, Berlin is vexed about Turkey imprisoning German nationals. Even though the release of Steudtner and the other German citizen alleviated some burden on ties, the cases of German journalist Deniz Yücel and the German citizen translator for the Etkin Haber Ajansı news agency, Meşale Tolu, remain controversial for the German government. "It is not acceptable that Germans in Turkish custody have to serve time as a bargaining chip of the Turkish government for political reasons," Gabriel said in August.

However, as a sign of hope, the German Foreign Ministry official said: "There is a desire to stay in close contact from both sides and, step-by-step, to rebuild trust." Çavuşoğlu and Gabriel's informal meeting may have sparked the beginning of a reconciliation process between the two countries. The question of whether this will be sustainable depends on future developments. Yet, the German official said even though the issues are extremely sensitive, "we must maintain an open dialogue on these very difficult issues. We will see how it goes on."