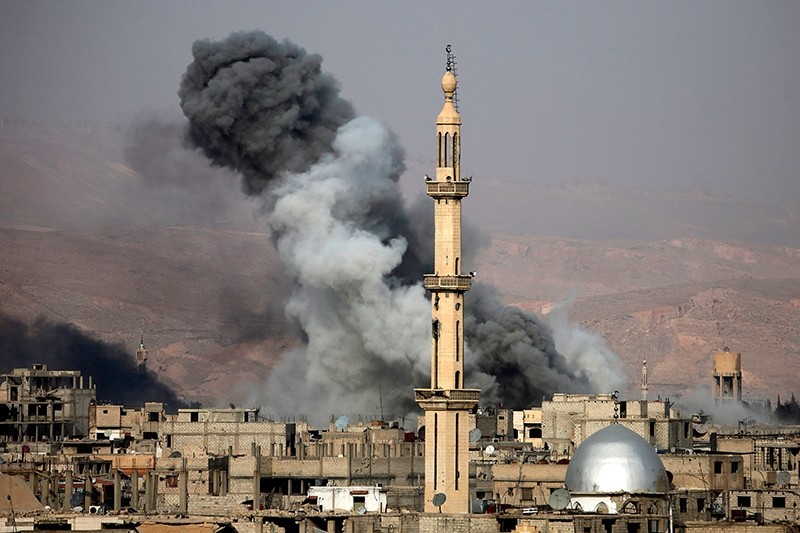 Smoke rises following an air strike on the opposition-held besieged town of Arbin, in the Eastern Ghouta region on the outskirts of Damascus, Nov. 18, 2017. (AFP Photo)
by Daily Sabah Nov 20, 2017 12:00 am

When asked whether the terrorist PYD and its armed wing People's Protection Forces (YPG) will be invited, Ushakov said "it will all be discussed these days."

Turkey had previously objected to the invitation of PYD/YPG or its umbrella organization, the Syrian Democratic Forces (SDF) to the congress.

Ankara has reportedly prepared a special "Syria file" that covers the key issues likely to be discussed at the meeting, including the latest developments in Afrin and Idlib, the deployment of Turkish military units in northern Syria, the possible routes used by Daesh terrorists escaping Raqqa and suggestions to stop the attempts of bringing the PKK-linked organizations to the negotiation table.

Earlier Monday, Turkish government spokesperson Bekir Bozdağ said: "Turkey supports all the efforts aimed at Syrian peace. However, all the sides that will gather around the negotiation table need to be legitimate actors. Thus, it's not possible for us to sit down with the PKK and its collaborators."

Russian President Vladimir Putin's aide also said that the date for the Putin-initiated congress had not been set yet.

The presidents of Turkey, Russia and Iran are expected to attend Wednesday's summit. Foreign ministers of the three countries met in the Turkish resort city of Antalya over the weekend to prepare for the meeting.

Ushakov added that military officials will also participate in this week's talks on a Syrian settlement in the Russian Black Sea resort city of Sochi without providing further details.

Earlier this year, Ankara, Moscow and Tehran jointly sponsored a Syrian cease-fire. The three countries have carried out negotiations in the Kazakh capital Astana since and decided on the formation of five de-escalation zones in Syria.