Trump's words binding for Turkey, rather than other US actors, PM Yıldırım says 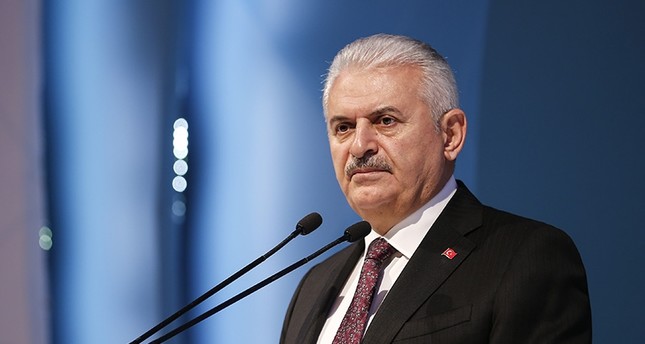 Prime Minister Binali Yıldırım said Tuesday that U.S. President Donald Trump's statements on weapons deliveries to PKK-affiliated groups in Syria are binding for Turkey, rather than other institutions that make statements contradicting his pledges, referring to conflicting statements between Trump and the Pentagon on the issue in recent remarks.

The Pentagon said it plans to retrieve heavy weapons from the Syrian Democratic Forces (SDF) in Syria since the Daesh terrorist group has essentially been eliminated. The SDF is predominately made up of fighters from the PKK Syrian affiliate Democratic Union Party's (PYD) People's Protection Units (YPG) militia. It had announced on Nov. 27 that the U.S. would continue its partnership with the SDF, just also a couple days following the phone conversation between President Recep Tayyip Erdoğan and Trump in which Trump had promised to halt weapons deliveries to the YPG. However, it was reported that the Pentagon has sent 100 armored vehicles to YPG-controlled areas in northern Syria.

"It is our intent to regain large vehicles and heavy or crew-served weapons once specific threats have been defeated," Pentagon spokesman Col. Rob Manning said in a written statement.

"Make no mistake: a lot of fighting is still necessary to defeat the remaining pockets of ISIS, and substantial work remains to ensure ISIS's lasting defeat in the region, particularly as the group reshapes itself into more of an insurgency," he added, using an alternative acronym for Daesh.

Speaking to reporters on his way back from an official trip to the U.K., Yıldırım said that Turkey takes Trump's word as binding and contradictory statements from other institutions such as the Pentagon regarding the YPG are "their business."

"We always convey our thoughts and concerns regarding the matter to [the U.S.] and we will continue to do so," Yıldırım said.

Justice and Development Party (AK Party) spokesman Mahir Ünal said yesterday in a televised interview that "there is no more one U.S. we can talk about," recalling Trump's statement on weapons deliveries to the YPG, calling the move "nonsense" in contradiction to the Pentagon's ongoing support for the terrorist group.

Considering that Daesh lost almost all the areas it controlled, Turkish officials previously directed criticism at the U.S. because of the continuation of providing supplies.

Erdoğan, on his way back from Sochi, Russia, where he met with Russian and Iranian counterparts, Vladimir Putin and Hassan Rouhani, on Syria, criticized Washington's unfulfilled promises made in the past. "Let's hear what they have to say about what they are doing. In Hamburg, they said they had recorded the registration numbers of all weapons given to the YPG and would be collecting them after Daesh was destroyed. Did they do so?" he said. He also questioned the ongoing U.S. support for the YPG, despite it being said that Daesh has collapsed. "They said Daesh is cleared. Then why and to where do they deliver these weapons? What do they want to do? Let's listen to them," he said.

In June, U.S. Secretary of Defense James Mattis also said in a letter to Defense Minister Fikri Işık that the U.S. was in a tactical cooperation with the YPG-dominated SDF, and that the U.S. guarantees transparency in this relationship. However, SDF officials later announced that the U.S. could stay in Syria after Daesh is defeated.

Ankara strongly disagrees with Washington's backing the YPG in the war against Daesh in Syria and the issue is one of the main reasons underlying the strained ties between the two NATO allies. While the U.S. insists that supporting the YPG was the only option to defeat Daesh, Ankara says an alternative could be found with local Arab tribes backed by countries in the region instead of supporting and arming one terrorist group against another. Ankara also had said the two countries can carry out a joint operation in Raqqa, before the YPG-led offensive started, but Washington rebuffed the offer.

The PKK is listed as a terrorist organization in Turkey, the U.S. and the EU. More than 40,000 people have been killed in its over three-decade terrorist campaign against the Turkish state.