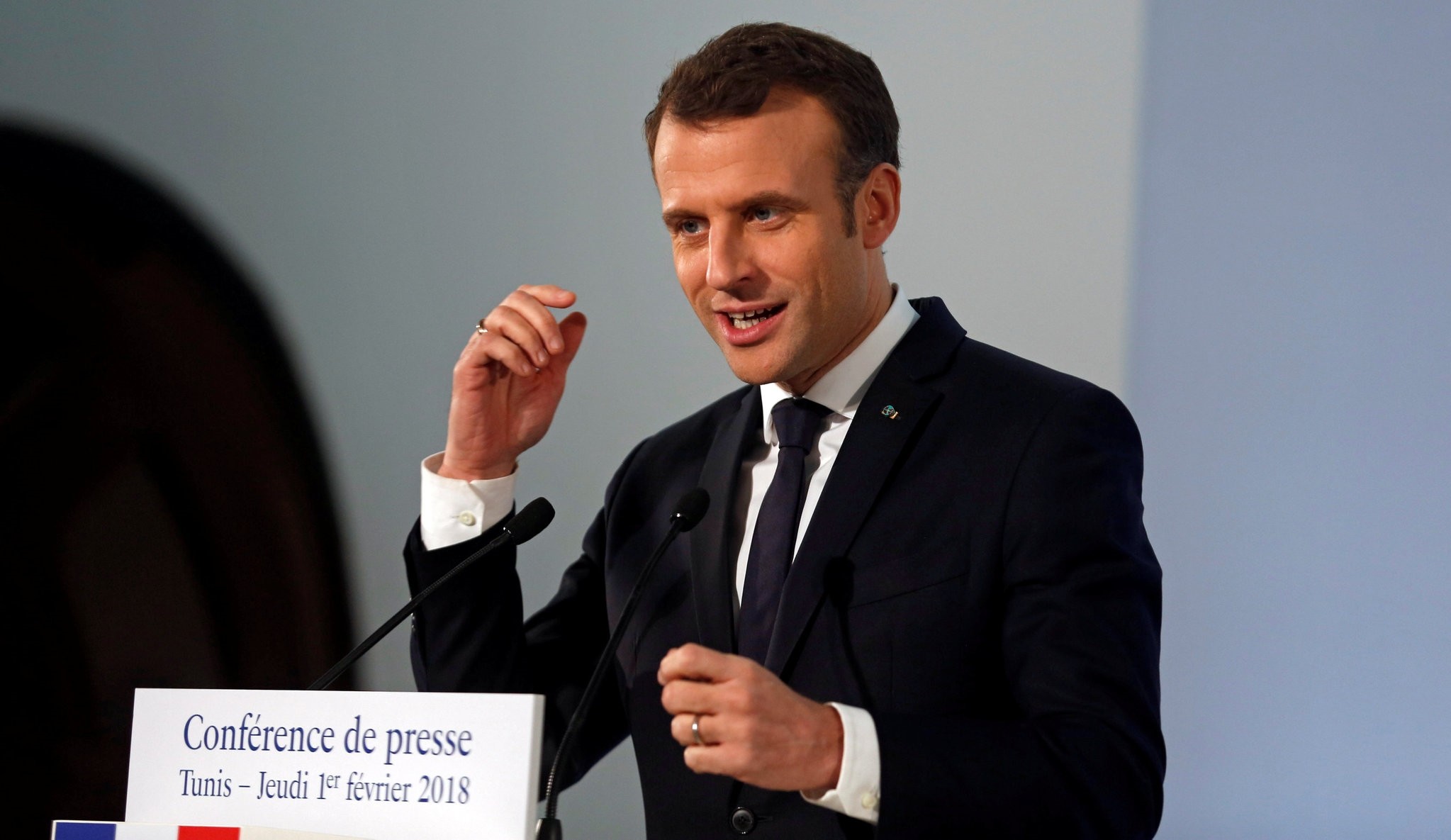 French President Emmanuel Macron delivers a speech to members of the French community in Tunisia, in the capital Tunis on January 31, 2018. (REUTERS Photo)
by Daily Sabah with Reuters Feb 02, 2018 12:00 am

French President Emmanuel Macron on Thursday downplayed from his cautionary remarks he had made about Turkey's operation against the People's Protection Units (YPG) terrorists in northern Syria after Ankara labeled them as insults.

Macron on Wednesday warned Turkey the operation in the Afrin region should not become an excuse to invade Syria and said he wanted Ankara to coordinate its action with its allies.

Operation Olive Branch was launched by Turkey on Jan. 20 to remove the PKK and its affiliate the Democratic Union Party (PYD) and its armed wing the YPG, as well as Daesh terrorists from Afrin in northwestern Syria.

According to the Turkish General Staff, the operation aims to establish security and stability along Turkey's borders and in the region, as well as to protect the Syrian people from the oppression and cruelty of terrorists.

The military said "utmost importance" is being placed on not harming any civilians, while respecting Syria's territorial integrity.

In a curt response on Thursday that highlighted the strain between Ankara and its NATO allies, Foreign Minister Mevlüt Çavuşoğlu said: "We consider a country like France giving us reminders about an operation we are carrying out in accordance with international laws to be insults."

"We are using our right to self defense, this is in line with U.N. Security Council decisions and not an invasion. They shouldn't be two-faced," he said.

"I note that the reaction of the Turkish foreign minister probably means that (the operation) is nothing more than to secure the border and that Turkey does not intend to go further than the positions which it occupies today or to stay in the region in the long-term," he told a news conference.

France, like the United States, has extended arms and training to a YPG-led militia in the fight against Daesh in Syria, a move which has also angered Turkey as the YPG is an extension of the PKK.

The PKK is recognized as a terrorist organization by Turkey, the United States and the European Union. The group has waged a three-decade insurgency in Turkey's largely Kurdish southeast.

The operation in Afrin – bordering Turkey's Hatay and Kilis provinces – was widely expected in the wake of Operation Euphrates Shield in northern Syria, which cleared Daesh terrorists from Turkey's border between Aug. 24, 2016 and March 2017.

Afrin has been a major hideout for the PKK/PYD-YPG since July 2012 when the Assad regime in Syria left the city to the terrorist group without putting up a fight.