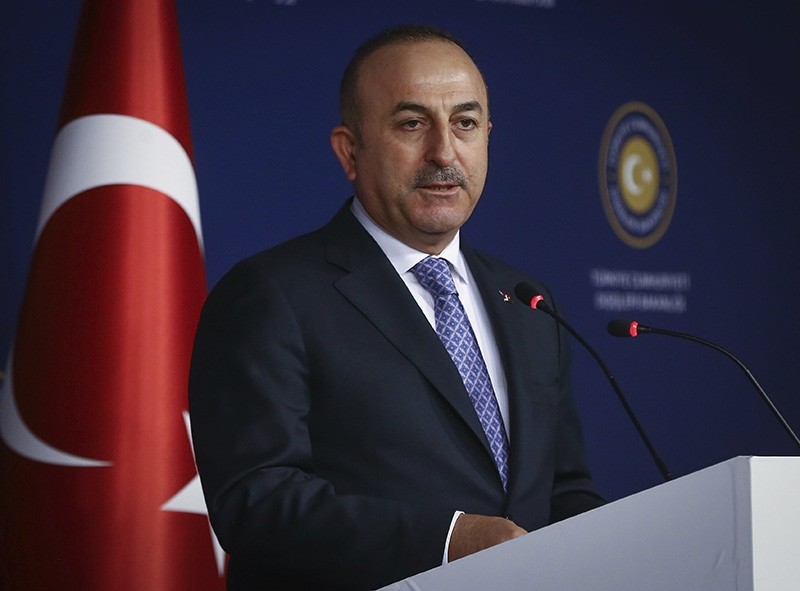 Mevlüt Çavuşoğlu's remarks came last month in an exclusive interview with the Canadian-based, Ottawa Life Magazine, in Canada, where he attended The Vancouver Foreign Ministers' Meeting on Security and Stability on the Korean Peninsula.

Çavuşoğlu said the U.S. and Turkey are in a delicate period because Ankara and Washington hold different views on important issues, including PYD/YPG terrorists in Syria and the presence of the FETÖ terror group in the U.S.

"As a NATO ally, Turkey rightly asks the U.S. to prioritize Turkey's vital security concerns over the U.S.'s short-term tactical policy goals," he said. "However, Turkey and the U.S. are long-standing allies, and our relations are time-tested."

While highlighting the importance of Turkish-American cooperation for bilateral relations and the future of the region, Çavuşoğlu said Ankara continues high-level contacts with Washington and believes it is important to keep communication channels open.

"We need to focus on a positive agenda from which both sides can benefit. Enhancing economic relations is also a priority for both sides," he said, noting his meeting with U.S. Secretary of State Rex Tillerson in Vancouver regarding current difficulties in bilateral relation and Turkey's expectations from the U.S.

"We would like to increase our bilateral trade volume [17.5 billion dollars in 2016] and encourage mutual investments."

As the carnage and war in Syria appears to be winding down, Çavuşoğlu was reluctant to make any definitive comments about that outlook for 2018 but said that nation's future would be determined by Syrians.

"During the last seven years of conflict, which started with peaceful protests and then flamed into a civil war, the people of Syria have made their choice clear," he said. "They aspire for democracy, freedom, equality, and rule of law. The record of [Bashar] Assad counters these aspirations. History tells us that the will of the people prevails eventually," and he said Turkey would continue its "intense efforts" to ensure talks in Astana, Sochi and Geneva yield concrete results so that 2018 would be the final year of conflict.

Along with ensuring lasting and credible political solutions to the conflict, Çavuşoğlu said the goal would not be reached unless the international community helps rebuild Syria's infrastructure, facilitate the return of refugees and those displaced, and provide economic aid.

"In brief, the international community should contribute to saving the future generations of Syria," he said.

"Preserving Iraq's sovereignty, territorial integrity and political unity is vital for Turkey. These principles are also critical for regional peace and stability," he said.

"In line with this understanding, we opposed the KRG referendum, and the Iraqi Federal Supreme Court's recent rulings have proven us right. In coordination with the Iraqi Federal Government, we adopted some measures against the KRG."

Shortly after the vote, considered illegal by Turkey and other regional and global observers, the court ruled in favor of Iraqi territorial integrity. It also said the Kurds should relinquish control of its areas to the Iraqi government.

Çavuşoğlu was adamant Turkey never targeted the Iraqi Kurds by not supporting the referendum, and said the KRG leadership should unequivocally accept the court's decision and act accordingly with Iraqi government.

If Baghdad and Erbil, the capital of the KRG, enter negotiations, Turkey would be one of the strongest supporters of the process, said Çavuşoğlu.

Daesh has been militarily defeated in Iraq and it is now time for the Iraqi government to defeat the terror group ideologically by adopting inclusive policies, promoting a common Iraqi identity and reconstructing liberated areas, according to Çavuşoğlu, who noted Turkey will support its neighbor in those efforts.

"Vis-a-vis the Kurdish situation in Syria, the key defining factor will not be the defeat of Daesh on the ground through military means. A new social and political contract should be reached via a Syrian-led and Syrian-owned process, and it should determine the role of Syrian Kurds in Syria's future. Our efforts aim at facilitating this process, be it in Astana, Geneva, or Sochi.," Çavuşoğlu said.

"The delegates of Syrian Kurds who chose to isolate themselves from terrorist organizations are well-represented in these fora. As for the PYD/YPG, which is the Syrian extension of the PKK terrorist organization, it is destined to fail in its efforts to create fait accompli on the ground, under the pretext of combating terrorism. We will continue to support the legitimate aspirations of the Syrian people to live freely in a democratic Syria that maintains its territorial integrity and political unity."

Turning to Jerusalem recently being acknowledged as Israel's capital by the U.S., Çavuşoğlu said the city also known as Quds is home to three monotheistic religions and Its preservation is the duty of all humankind.

"No one has the right to make unilateral or arbitrary decisions on the status of Jerusalem, which is one of the final status issues in negotiating peace between Palestinians and Israelis," he said, adding that President Donald Trump's decision on Jerusalem is a "dangerous violation" of international law and a source of tensions in the region.

Because of Trump's "illegal" decision, Israeli officials are announcing a rash of settlement plans and taking steps to intensify the occupation of Palestinian lands, which imperils the viability of a two-state solution that is based on 1967 borders, according to Çavuşoğlu.

Recalling the UN vote that rejected and slammed the U.S. for the decision, and Washington's threats to countries for casting votes against the U.S., Çavuşoğlu urged all nations to stand against efforts to create further fait accompli concerning the status of Jerusalem.

"The current status quo is not sustainable. A new approach is needed to achieve comprehensive, just and lasting peace in the Middle East," he added. "We are ready to support all efforts to revive the peace process."

Touching on Turkey's membership in and relationship with its NATO partners, the Turkish minister described the alliance as the center of Turkey's defense and security plans.

"Turkey has historically shouldered its fair share of the burden, if not more, within NATO, and it continues to do so with equal determination. Our record of 66 years within the alliance, including our current undertakings, speaks for itself," he said.

"First and foremost, we are a frontline actor in the fight against terrorism, in particular against terrorist groups such as Daesh, as well as the PKK and its offshoots PYD/YPG. As one of the top-five contributors to NATO operations, we have been a consistent and significant contributor to NATO undertakings in Afghanistan, as is the case with the ongoing Resolute Support Mission," he continued.

"Turkey is a proud member of NATO and is particularly fond of its solemn partnership with Canada. Indeed, while there are some circles trying to cast doubt on Turkey's commitment to NATO, the facts on the ground are clear. We are forthcoming in our commitments, and we greatly value allied solidarity and cooperation," he said, reiterating that Ankara expects the same from its NATO allies.

"Any concern of ours should be a matter of concern for them. This is particularly true in the face of our longstanding fight against terrorism in our part of the world," he added.