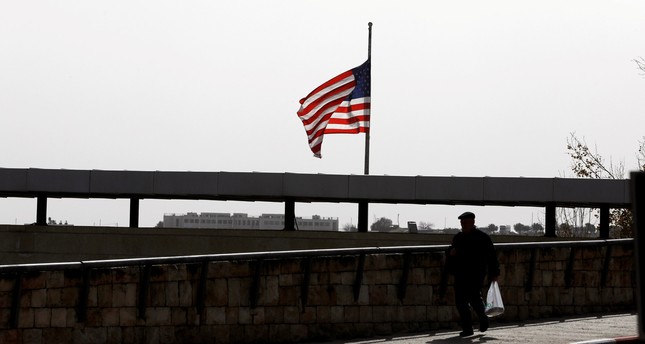 A United States flag flies over a complex belonging to the U.S. consulate in Jerusalem, January 22, 2018. (REUTERS Photo)
Related Articles

The United States' decision to open an embassy in Jerusalem in May shows its insistence on damaging peace in the region, the Turkish Foreign Ministry said in a statement Saturday.

The U.S.' controversial move also disregards the decisions taken by the United Nations and the Organization of Islamic Cooperation, and is very worrying, the ministry said.

"The U.S. government's announcement that it will move its embassy in Tel Aviv to Jerusalem in May shows that it insists on destroying the grounds for peace by violating international law, United Nations Security Council resolutions on Jerusalem and the established U.N. parameters. The United States, unfortunately, with this decision, shows that it has not heard the voices of the international community's conscience, which was reflected in the resolution of the OIC Extraordinary Summit in Istanbul and the subsequent resolution of the U.N. General Assembly in Istanbul, or even worse, does not care about it. Despite the extremely worrying nature of this decision taken by the U.S., Turkey will continue the exert effort to protect the legitimate rights of the Palestinian people along with the overwhelming majority of the international community."

On Dec. 6, Trump recognized Jerusalem as Israel's capital and announced plans to move the U.S. embassy from Tel Aviv to the city, sparking protests and unrest across the region.

Trump's recognition of Jerusalem as Israel's capital reversed decades of U.S. policy and has enraged Palestinians and triggered violent protests in Jerusalem, the occupied West Bank and the Gaza Strip. Israel considers Jerusalem to be its eternal, indivisible capital and Palestinians want East Jerusalem as the capital of their future state. Israel captured east Jerusalem in the 1967 Six-Day War and annexed it in a move that is not recognized internationally.

Share on Facebook Share on Twitter
Previous in Diplomacy Turkey's Foreign Minister Mevlüt Çavuşoğlu said on Friday that Syrian... Next in Diplomacy Amid the recent agreement between Ankara and Washington to enhance...
DAILY SABAH RECOMMENDS