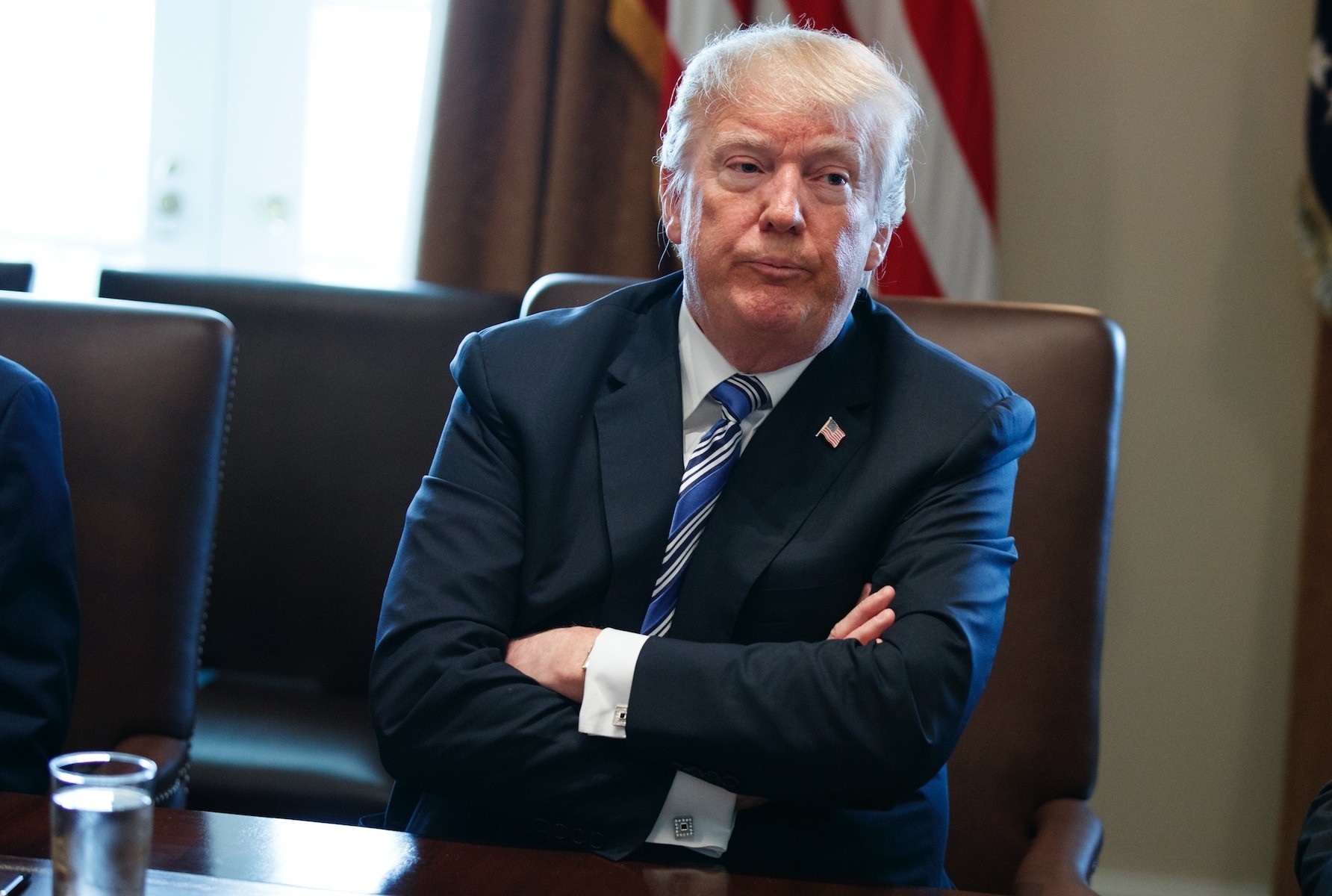 President Donald Trump listens during a cabinet meeting this month at the White House, Washington.
by Mustafa Kırıkçıoğlu Mar 23, 2018 12:00 am

Ankara's ties with Washington, particularly concerning Syria policy, are expected to strengthen as U.S. President Trump replaces establishment figures in his administration with ones willing to work better with the White House

Relations have been damaged by the continued U.S. assistance to the PKK terrorist group's Syrian affiliate People's Protection Units (YPG) militia. Holdovers from the previous administration and establishment officials have also undermined ties. "We know that President Trump is eager to normalize relations with Turkey. But he should be handling the system fully," Çavuşoğlu said. A day earlier, President Erdoğan urged Trump to discipline U.S. officials who criticize Turkey's offensive in Afrin. "We expect Trump to remove this confusion and put a stop to statements emanating from his administration that approach insolence. Those who speak on Trump's behalf are unaware of what they say," Erdoğan said before criticizing spokespeople, strategists and the media in the U.S., which he said seem to be attacking Turkey without respite.

Several U.S. officials have criticized Turkey's military interventions against the threat posed by the YPG.

Turkey discontent on reneged US promises

Ankara has long been discontent with Washington's inconsistent policy on Syria and its reneged promises regarding ceasing support to the YPG in Syria. Ambiguous and contradictory remarks from U.S. foreign policymakers and U.S. Central Command (CENTCOM) figures on these two issues have become a serious matter of concern for Ankara.

In November, Trump promised to halt weapons deliveries to the YPG in Syria in a phone call with Erdoğan. However, a couple days after Trump's promise, the Pentagon sent 100 more armored vehicles and continued to deliver more weapons thereafter to YPG-controlled areas in northern Syria.

The Pentagon also had said it plans to retrieve heavy weapons from the YPG-dominated Syrian Democratic Forces (SDF) once the Daesh terrorist group has been eliminated. However, it reneged on its promise to cease its support for the YPG and has substantially increased weapons and technology support to the group despite Daesh having lost almost all of the territory it held and is now stuck in a desert in southeast Syria. Turkish forces seized some of the weapons during its Operation Olive Branch in YPG bunkers and which were ready to be used against Turkish and Free Syrian Army (FSA) forces.

Some analysts argue that the replacement of former U.S. Secretary of State Rex Tillerson with CIA Director Mike Pompeo is a move to ensure the administration follows policies that better reflect Trump's opinions. Other so-called adults in the room such as National Security Adviser H.R. McMaster and Secretary of Defense James Mattis are also said to be in the firing line for failing to abide by Trump's priorities.

The New York Times, in an article detailing Trump's thinking in firing Tillerson, argued that the president is now "determined to surround himself with loyalists more willing to reflect his 'America First' views."

The article continued: "It also suggests that after a year of chaotic on-the-job training, Mr. Trump has developed more confidence in his own instincts and wants aides and cabinet members with whom he has good chemistry and who embrace his positions."

The announcement of the establishment of a border force in Syria by the Pentagon consisting of SDF militants also caused serious anger in Ankara. Just after the launch of Operation Olive Branch to liberate Afrin from the YPG, Russia claimed that Washington's provocative moves, including a decision to form a border force from YPG units, triggered Turkey's military operation.

In January, the U.S.-led coalition in Syria announced it was working with the SDF to set up and train a Syrian border protection force. Upon Ankara's harsh criticism, Tillerson backtracked, saying that the United States owes Turkey an explanation and does not have any intention to build a border force along the Turkish border with Syria, and the issue had been misrepresented.

In the same AA interview, Çavuşoğlu said the previous understanding established between Turkey and the U.S. on the joint plan to push the YPG out of Manbij to east of the Euphrates River would be carried out by Turkey alone if necessary.

"If this plan is not realized, the only option left will be clearing away terrorists. This is not just valid for Syria, but also for Iraq," Çavuşoğlu said, referring to Erdoğan's previous statement that Turkey would also eliminate the PKK presence in Sinjar, Iraq.

Erdoğan's phone conversation with Trump last night after Daily Sabah went to press is expected to focus on Manbij.

Çavuşoğlu was due to meet former Secretary of State Rex Tillerson on March 19 to discuss a roadmap for Manbij, including the withdrawal of the YPG and the return of U.S. weapons. Despite the delay caused by Trump's sacking of Tillerson, Turkish officials said they expect the U.S. to act in accordance with the common understanding both sides reached.

The northern Syrian city of Manbij has been one of the most hotly debated points of discussion between Ankara and Washington.

Ankara's demand from the U.S. to cease arming the YPG and ensure their withdrawal to east of the Euphrates dates back to former President Barack Obama's time in office. The U.S. had promised to meet Ankara's demands, but has not so far, which has strained relations between the two countries.