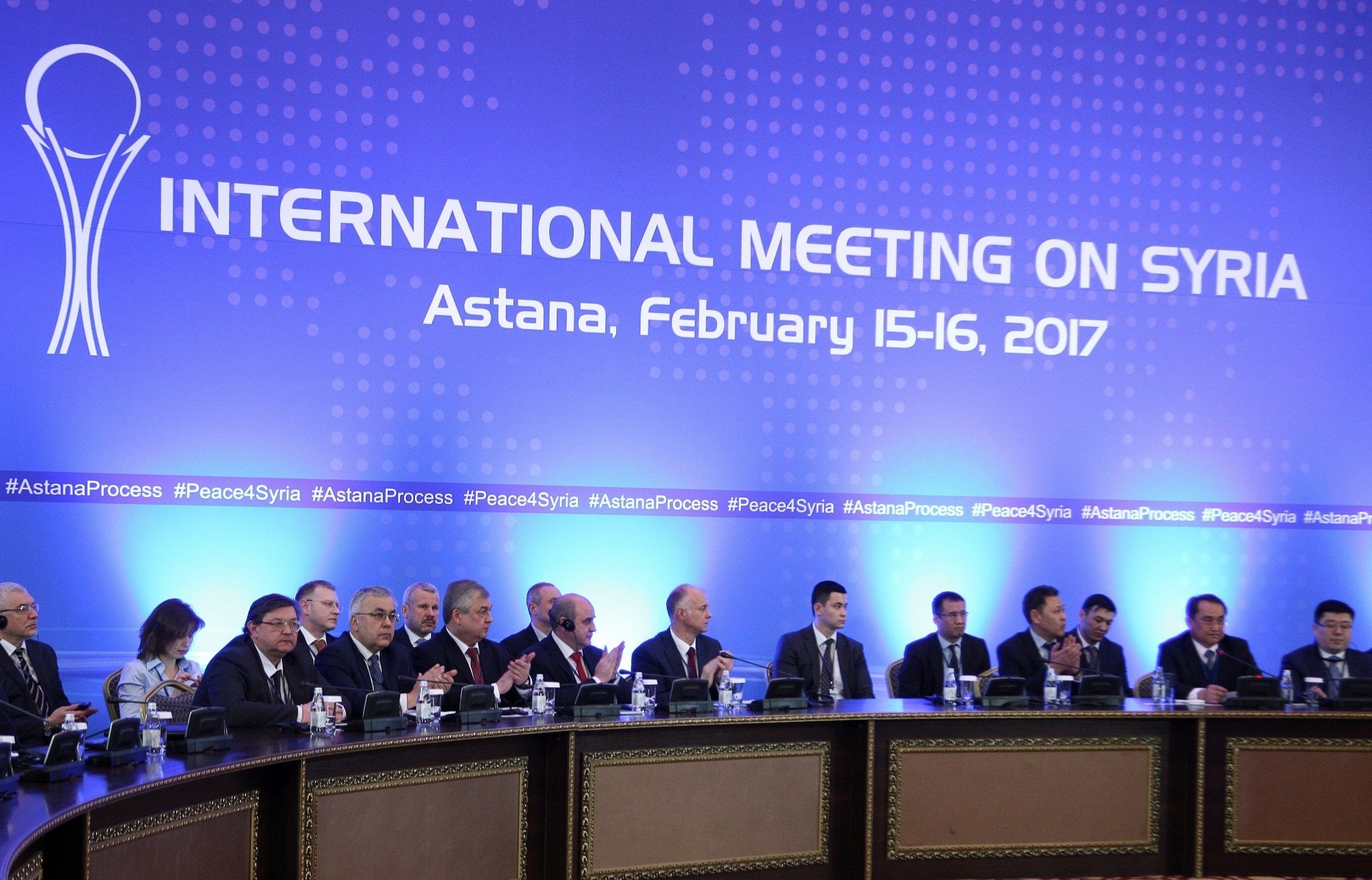 Last year, Turkey, Iran and Russia agreed in Astana to establish de-escalation zones in the northern province of Idlib and parts of neighboring Latakia, Hama and Aleppo.
by Daily Sabah Apr 06, 2018 12:00 am

The Astana process raises hopes for a way out of the war in Syria, as it has taken positive steps with de-escalation agreements, delivering humanitarian aid, ensuring the secure return of displaced people and reaching a political solution

With talks in Geneva yet to yield results to wind down the conflict in Syria, the Astana process launched by Turkey, Russia and Iran is gaining ground by establishing de-escalation zones and reducing tensions, paving the way for a political resolution. The recent meeting of the presidents of Turkey, Russia and Iran in a trilateral summit in Ankara has conveyed the message that the three countries are united in the idea that Syria's territorial integrity needs to be secured and efforts should be ramped up to provide humanitarian aid.

The decisions made at the summit are considered to be essential as they would enable solid steps on the ground. Turkey, Russia and Iran, the three guarantor countries of the de-escalation zones in Syria, have been actively cooperating to put an end to the ongoing civil war. The three guarantor countries have been stressing that the Astana process is not an alternative to the U.N.-brokered Geneva talks, but a complement to it. In relation to the issue, Presidential Spokesperson İbrahim Kalın said Thursday in a press conference: "Astana is a complementary process aiming to find a resolution, not an alternative. With the gridlock in the Geneva talks, the Astana process has become more critical."

The Geneva talks, which began in 2014 to end the war by bringing conflicting sides together, have failed to yield concrete results and hope for a major breakthrough following the process remains bleak.

During the peace talks last year in December, the U.N. envoy for Syria, Staffan de Mistura acknowledged that no real discussions took place between the regime and the opposition, despite "all sorts of creative formulas" tried by his team.

The U.N. envoy accused the regime delegation of setting preconditions in order to talk to the opposition, and said its team refused to discuss anything other than "terrorism" during the talks. De Mistura said the opposition was engaged on other subjects, such as governance, the constitution and elections.

The Assad regime uses the term, terrorism, to refer to all armed opposition against their leader Bashar Assad. Admitting the failure of the talks, de Mistura also said he needs to come up with "new ideas" for future talks.

In the parallel Astana talks to Geneva, Turkey, Russia and Iran managed to take concrete steps to de-escalate the tension.

Last year, Turkey, Iran and Russia agreed in Astana to establish de-escalation zones in the northern province of Idlib and parts of neighboring Latakia, Hama and Aleppo. Under the Astana agreement, Turkey is to gradually establish 12 observation points from Idlib's north to its south to monitor and sustain the current cease-fire agreement for the de-escalation zones, deliver humanitarian aid and ensure the secure return of displaced people.

Underlining that the priority of the three countries is the ensuring of territorial integrity of Syria as stressed in the final declaration of the trilateral summit, Kalın said that Turkey has been taking its share of responsibility to contribute to the peace efforts and alleviate the sufferings of Syrian people.

As part of these efforts, Turkey has established eight de-escalation zones so far and will establish four more zones.

Kalın highlighted that in the trilateral summit, it was also stressed that all terrorist groups need to be cleared from Syria and their presence under the pretext of fighting against Daesh should not be allowed. Deputy Prime Minister Bekir Bozdağ also said on Thursday that Turkey will do what is necessary to eliminate terrorists from Syria and is resolute in ensuring the territorial integrity of the country. The presidents of the three countries put great emphasis on political solution to the crisis. The necessity of holding free and fair elections in the country was also underscored.

Following the summit, Turkey also repeated that its efforts to provide aid to the Syrians will continue. Kalın underlined that Turkey has sent 30,000 trucks of aid to Syria. He added that in order to implement the suggestion of President Erdoğan to build houses within the borders of Syria, Russia and Iran need to increase pressure on the regime.