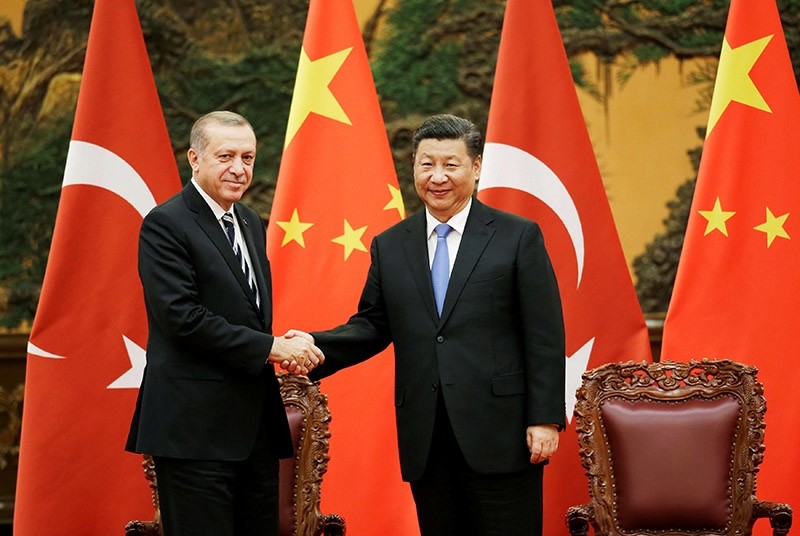 President Recep Tayyip Erdou011fan and his Chinese counterpart Xi Jinping attend a signing ceremony ahead of Belt and Road Forum in Beijing, China, May 13, 2017. (Reuters Photo)
by Daily Sabah Apr 19, 2018 12:00 am

Regarding the ongoing crisis in Syria, President Erdoğan underlined that Turkey has always been against the use of chemical weapons, urging for the tensions in the region to calm down.

According to presidential sources, Erdoğan and Xi agreed on the necessity of protecting Syria's territorial integrity, while also stressing the importance of joint action in the fight against terrorism.

The U.S., the U.K. and France hit Syria with airstrikes on April 14, in response to a chemical attack by the Assad regime that recently killed more than 70 civilians in Eastern Ghouta and Douma, in the biggest Western intervention against the regime.

Ankara has backed the U.S.-led airstrikes on Bashar Assad's military facilities in Syria, believed to have been used for chemical attacks, saying they were positive steps taken against the use of chemical weapons.

The two leaders agreed to further improve bilateral relations between Turkey and China in all areas, and also discussed the planned investments in Turkey as part of the Belt and Road Initiative.