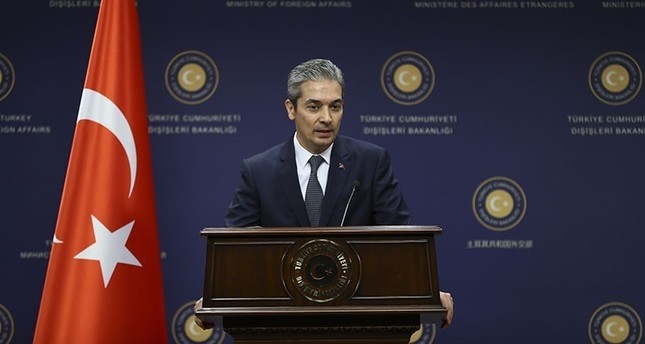 The United States' claims that thousands of "displaced people" are not allowed to return their homes in Syria's Afrin region are false and 'wholly unfounded,' Turkish Foreign Ministry Spokesperson Hami Aksoy said Saturday.

In response to U.S. State Department Spokesperson Heather Nauert's press briefing on May 3 in which she expressed grave concern about the humanitarian situation in Afrin, Aksoy said her comments were nothing but "unfortunate" statements based on "unconfirmed assumptions under the influence of the People's Protection Units (YPG)'s smear campaign about Turkey's Operation Olive Branch.

Hitting back at Nauert's claims that 140,000 people had been displaced and "not allowed back in their homes and communities," the Turkish spokesperson said their concerns were unfounded, and the real main concern in northern Syria was the ongoing cooperation between PKK/YPG/PYD terrorists and countries Turkey deems as it allies.

Asserting that it was the YPG itself that blocked locals and civilians' return to Afrin, Aksoy said the claims were a part of the terrorist organization's black propaganda against Turkey.

However, Aksoy did acknowledge that the mines and hand-made explosives placed by the PYD / YPG constituted a great security threat that made such returns difficult, but assured the U.S. that Turkey was continuing its efforts to normalize the situation in Afrin and facilitate the safe return of the local population.

The United States has supported the YPG under the name of the Syrian Democratic Forces (SDF), which Ankara considers the Syrian offshoot of the PKK terror organization that has waged a more than 30-year war against the Turkish state, resulting in tens of thousands of deaths.

American support for the YPG has long vexed Ankara as Washington views them as a "reliable partner" in its fight against Daesh and continues to provide it with arms and equipment in the face of strong objections by Turkey.

Aksoy also pointed out that Operation Olive Branch had so far shown the world that fight against terror could be carried out without causing any harm to civilians.

Turkey will not answer calls demanding it and other "relevant actors operating in the northwest" allow the passage of international humanitarian aid organizations, as it is already doing everything it can to facilitate the delivery of humanitarian aid by United Nations convoys to Afrin, he concluded.

Turkey launched Operation Olive Branch on Jan. 20 this year to clear the YPG/PKK and Daesh terrorist groups from Afrin, amid growing threats from the region.

The operation is being carried out under the framework of Turkey's rights based on international law, UN Security Council resolutions, its self-defense rights under the UN charter, and respect for Syria's territorial integrity, according to the Turkish military.

On March 18, Turkish-backed troops liberated Afrin town center, which had been a major hideout for YPG/PKK terrorists since 2012.