Trial of Turkish woman detained in Israel set for Tuesday 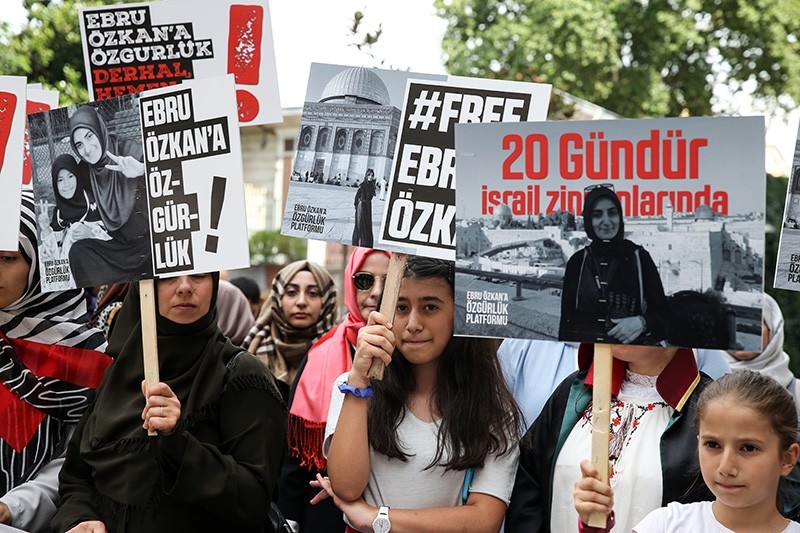 Demonstrators gather in Istanbul's Taksim Square to show support for Ebru u00d6zkan, a Turkish national who was detained in Israel on June 11. (AA Photo)
by daily sabah
Jul 03, 2018 12:00 am

Ebru Özkan, a Turkish national who was detained in Israel on June 11, will have a trial in an Israeli military court on Tuesday.

Özkan was detained at Tel Aviv's Ben Gurion Airport after her visit to Jerusalem, on charges of "threatening Israel's security and having links with terrorist groups."

Since then, Israeli officials have extended her detention two times, resulting in Özkan spending more than three weeks in detention.

According to Özkan's lawyer Omar Khamaysa, officials from the Turkish consulate in Tel Aviv will attend the trial.

Speaking to Anadolu Agency, Ebru's mother Ayten Özkan denied Israeli allegations, calling the trial "unjust." She said this was not her daughter's first visit to Jerusalem and that she loved the city and the people in there.

According to the mother, the Israeli officials have not allowed Ebru Özkan to talk with her parents on the phone throughout her time in custody.

Activists from several NGOs staged a protest in Istanbul's Taksim district on Sunday in support of Özkan. The protesters called for Israel to release Özkan as soon as possible and to formally apologize to her.

Özkan is not the first Turkish citizen to have been recently detained by the Israeli authorities.