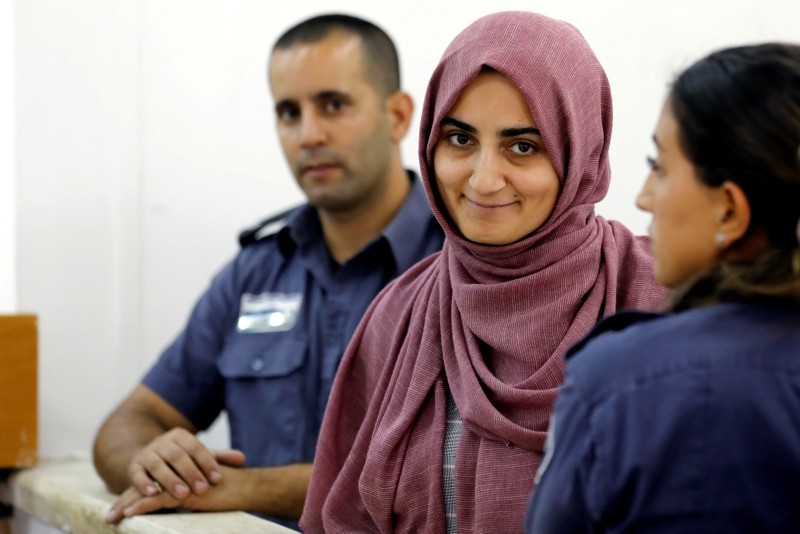 Turkish citizen, Ebru u00d6zkan, who was arrested at an Israeli airport last month, being brought to an Israeli military court near Migdal, Israel July 8, 2018. (REUTERS Photo)
by Daily Sabah with Agencies
Jul 10, 2018 12:00 am

Israeli military prosecutors objected an earlier decision by a court for the conditional release of a Turkish citizen who was arrested on June 11 on vague charges, including helping terrorists.

Late Monday, an Israeli military court ordered the conditional release of Ebru Özkan, a Muslim tourist of Turkish origin who was in Jerusalem to visit sacred places in the city.

The court set a series of conditions for her release, including the payment of a bail of 15,000 Israeli shekels (about $4,125) and the confiscation of her passport. She was also ordered to report to the nearest police station twice a week, effectively banned from leaving Israel. She will have to take her case to a higher court if convicted in later hearings.

However, after the prosecutor's office objected to the verdict a new hearing was scheduled for Wednesday for the court to decide whether to uphold the ruling.

Özkan's lawyer Omar Khamaysa said the court may decline the prosecutor's office's appeal during the hearing at the Ofer military court in the occupied West Bank.

Khamaysa said earlier that the 27-year-old woman was charged with helping terrorists but the only tangible evidence was apparently "bringing five bottles of perfume" from Turkey to Israel and hand it out to an unidentified Palestinian. She was also charged for giving a cellphone charger to another person. Both were members of Hamas, which is viewed as a terrorist group by Israel, according to the indictment against her. Özkan denied that she was aware of the Hamas links of the people she contacted. She was interrogated in Arabic despite having very little command of Arabic, Khamaysa informed media outlets.

Israel's disproportionate policy of detaining anyone with a Muslim background or people they suspect of having ties to Palestinian or Muslim associations in general raise serious human rights concerns. In particular, Israeli officials target those seeking to visit Jerusalem where sites sacred to the Muslim faithful are located.

Ebru Özkan was picked from among 38 Turkish nationals visiting the Al-Aqsa mosque, the third holiest site in Islam, in Jerusalem as part of a tourist trip. Despite granting her a tourist visa earlier, Israeli officials decided to detain her while she was returning to Turkey, for charges dating back to 2016. She was detained at Tel Aviv's Ben Gurion Airport moments before her flight back to Turkey. Since then, she has remained in detention with a court extending the detention period twice.

She is not the first Turkish national to be detained by Israel, who has briefly detained at least four others on different occasions since last year. Although Israel detains people from other nationalities as well, Turkish citizens make the headlines in Israeli and international media as Ankara is the most outspoken critic of Tel Aviv for its policies against Palestinians. She was also probably the first Turkish national to be paraded before cameras while handcuffed and shackled before she was brought to a military court to set the hearing date.