Experts raise concern over FETÖ threat in US 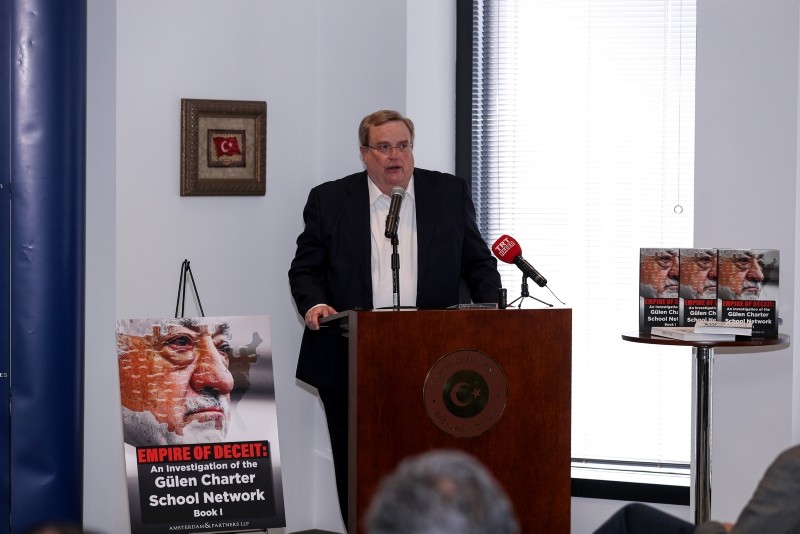 | AA Photo
by Anadolu Agency
Jul 12, 2018 12:00 am
American experts on Wednesday warned of the threat posed by the Gülenist Terror Group's (FETÖ) corrupt activities, especially in the country's education system.

"I believe that the Gülen movement in the U.S. presents a unique and unusual security threat," said Mark Hall, producer, screenwriter and director of the documentary, "Killing Ed," which probed the financial practices of FETÖ-linked charter schools in the U.S.

Speaking at the panel, "July 15 Coup attempt: Two Years Later," organized by the Turkish Heritage Organization (THO), a Washington-based think tank, Hall said FETÖ threatens the U.S. mainly by bringing in unqualified employees from other countries, especially from Turkey, as well as through money laundering and forgery of documents, deceiving local and federal authorities.

He noted that the terror group has also been financing major public relations firms for ages to convince American society that they are compatible with democratic, moderate American values. But a closer investigation reveals exactly the opposite.

"The Gülen movement has financed over a 19-year period a huge (public relations) movement to provide a story about who they are. But when you look more closely, it is not a group that is democratic or that has the U.S.'s best interests in mind," Hall said.

Emphasizing that FETÖ's U.S.-based leader, Fetullah Gülen, needs to be extradited to Turkey, he added that the U.S. government should also pay attention to the immigration issues related to FETÖ-linked charter schools.

"The schools should be removed from receiving tax dollars," he said.

Hall, in a previous panel, said he heard about the attempted coup from television news while he was in the process of filming a documentary, and "it was no surprise" to him to learn that FETÖ was behind the coup attempt.

Another speaker at the panel, Abraham Wagner, who is a lecturer in national security law at Columbia Law School, said the corruption in taxes and immigration that FETÖ commits in the U.S. needs to be examined thoroughly.

He also said that FETÖ is not known in America in detail.

"There is not a great deal of awareness in America among the public or the media about what the Gülen movement is," Wagner said. "It is unfortunate that it hasn't gotten the media coverage or official law enforcement coverage that it needs."

Mary Addi, who formerly taught at a Gülen movement school in the U.S., also spoke at the panel.

Addi said she first learned that her Turkish husband, who also taught at the school, was part of the movement when she realized he was giving 40 percent of his salary back to the movement.

"I said to my husband, 'Do you get that this is not legal? They are extorting money from you,'" she said, describing it as "illegal and money laundering."

Stating that FETÖ attempted to force her husband to divorce her because she was investigating its corruption, Addi said she worked with her husband to gather evidence of wrongdoing at the schools and submitted it to the relevant authorities.

However, she said she has been told that the biggest problem the agencies investigating the movement are facing is tracking the money.

"Where are our government officials? Why is our own country not doing anything about these schools?" she asked.