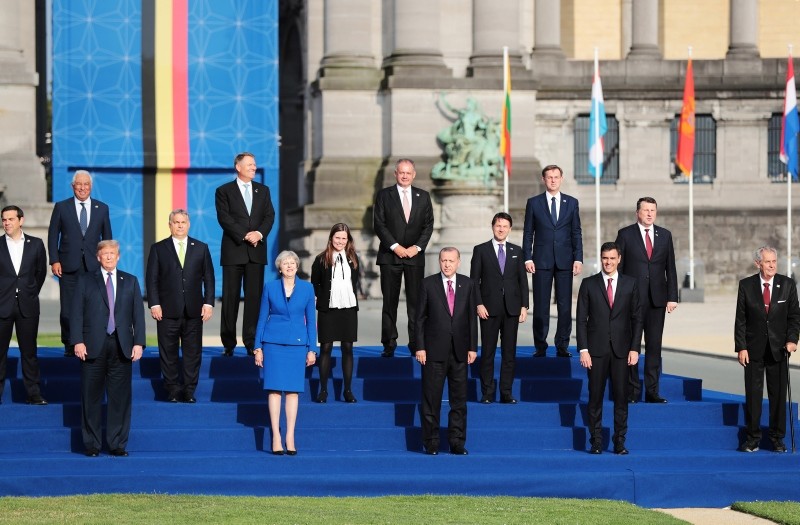 President Recep Tayyip Erdoğan said Turkey is already spending around two percent of its GDP on defense and voiced support for U.S. President Donald Trump's proposal of a four-percent target.

Speaking to reporters on his way back to Ankara from Brussels on Thursday, Erdoğan said: "There are wealthy countries in NATO that are still spending less than one percent of their GDP on defense and we have other states that cannot hit the two-percent target."

Erdoğan said Turkey is doing well in terms of military spending with 1.8 percent of its GDP going towards defense needs as well as ammunition purchases that are worthy of some $30 million, adding that Turkey is planning to increase the spending.

During the NATO summit, Trump demanded allies reach their commitment to increase spending to two percent of GDP "immediately" -- instead of by 2024 as previously agreed -- and soon after telling them to eventually double the figure.

He added that Turkey will assume a new NATO assignment in Iraq and start military training for Iraqi troops as part of the fight against terrorism and to help the country to establish stability.

The president also underlined the importance of a rapprochement between NATO and Russia as a measure to reduce military risks.

Relations with Germany and Greece

Commenting on his bilateral meeting with Merkel on the sidelines of the NATO summit, Erdoğan said the two leaders agreed on improving cooperation in economy and defense.

The president said he reminded Merkel, as well as Italian Prime Minister Giuseppe Conte and French President Emmanuel Macron, that the European Union needs to allocate the agreed funding for refugees in Turkey under the deal that was signed in 2016.

Erdoğan said he also urged the German leader to assume a more determined attitude in the fight against terrorism, reiterating Turkey's concerns over the PKK and Gülenist Terror Group's (FETÖ) presence in Germany.

The Turkish president is planning to make an official visit to Germany in August.

Erdoğan also met with Greek Prime Minister Alexis Tsipras in Brussels, where the two leaders discussed a range of issues including the release of eight FETÖ coup plotters in Greece, security and peace in the Aegean Sea, the rights of the Muslim minority in Greece as well as Greek Cyprus' unilateral offshore hydrocarbons search.

"Tsipras is well-intentioned and aiming to strengthen relations with Turkey but we need to work harder to make direly needed progress."

A few hours after the July 2016 defeated attempt to overthrow the Turkish government, the eight ex-military personnel arrived in Greece on a hijacked Black Hawk helicopter and requested asylum.

Turkey immediately issued an extradition request, which was eventually declined by the Greek Supreme Court in January 2017, after a series of trials and appeals.

The soldiers are accused by Turkish authorities of involvement in the defeated coup and being members of the FETÖ.

The eight ex-soldiers -- who were released from prison after their 18-month detention period expired -- are now being kept in a house outside of Athens, according to local media.