US offers condolences on 2nd anniversary of July 15 coup attempt 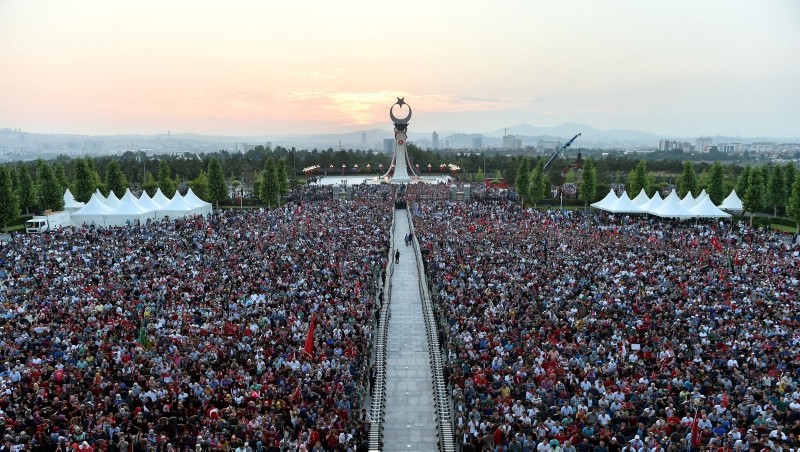 A handout photo made available by the presidential press office shows a mass of people during a ceremony to mark the first anniversary of the failed coup attempt on 15 July, at the presidential palace in Ankara, Turkey early 16 July 2017.
by daily sabah
Jul 15, 2018 12:00 am

The United States offered condolences for those who were martyred on the night of July 15, 2016, as Turkey commemorates the victims of the failed coup attempt on its second anniversary.

U.S. State Department spokeswoman Heather Nauert said in the statement that the United States stands by its NATO ally and called the coup attempt "an attack on democracy and a stark reminder that the preservation of democracy requires perseverance and safeguards for fundamental freedoms."

"We offer our deepest condolences to the friends and loved ones of those injured or killed," the statement said. "We affirm the United States' steadfast support for our NATO Ally Turkey and its democratic institutions."

On the night of July 15, 2016, a small military junta, accused of being members of the Gülenist Terror Group (FETÖ), tried to overthrow the democratically elected government and assassinate President Recep Tayyip Erdoğan, who was on holiday in southwestern Muğla province. Coup plotters, who used heavy weaponry, including fighter jets, helicopters and tanks, against pro-democracy people that poured onto streets, killed 250 people and wounded more than 2,200.

Ankara officially submitted evidence regarding FETÖ's role in the coup attempt to the U.S. in October 2016. The evidence shows that Gülen's network formed a quasi-state within the Turkish government and attempted to topple it with the ultimate intent of taking over the state through a vicious coup.

A U.S. delegation of State Department and Department of Justice arrived in Turkey last week to discuss the extradition of Gülen in more detail.