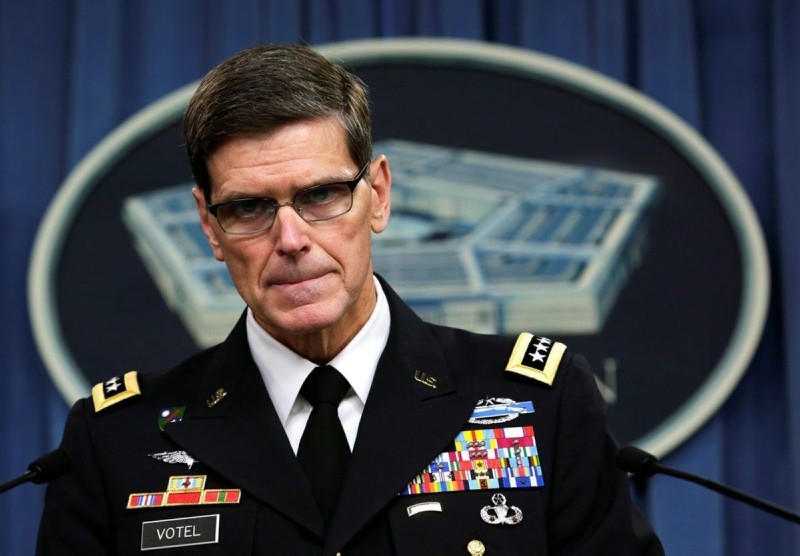 The head of U.S. Central Command (CENTCOM) said on Thursday that training for a joint Turkish-American patrol on the front line of the northern Syrian city of Manbij will soon start.

"As part of the diplomatic road map, we will soon begin the necessary training to conduct joint combined patrols along portions of the demarcation line in this extremely complex environment," said Gen. Joseph Votel, referring to the Manbij road map.

The road map which was announced last month after a meeting between Foreign Minister Mevlüt Çavuşoğlu and his U.S. counterpart Mike Pompeo, focuses on the withdrawal of the PKK-affiliated People's Protection Units (YPG) terror group from Manbij and stability in the region.

The withdrawal process has been carried out accordingly to the three-tier technical plan reached between Turkey and the United States. In line with the road map, the YPG started to leave Manbij on July 4. In the second part of the plan, Turkey and the U.S. are expected to start jointly monitoring the city after 45 days. In the third part of the plan, the local government will be established in 60 days.

The Turkish army on Wednesday conducted its 16th round of patrols in the city as part of the deal with the U.S.

In a written statement, the Turkish General Staff announced forces from both countries coordinated patrols in the region between areas liberated by Turkey's Operation Euphrates Shield and Manbij. The first patrols began June 18.

Giving details via a teleconference call to reporters at the Pentagon, Votel said the U.S. continues coordinated patrols with Turkey to ensure long-term stability in the city and to implement a diplomatically agreed arrangement that addresses mutual security interests.

When asked whether CENTCOM supports the rapprochement between the PKK and its Syrian branch, the U.S.-backed YPG, which functions under the group called the Syrian Democratic Forces (SDF), and the Syrian regime, he said the U.S. does not encourage the group to engage with the regime.

"But, of course, we do recognize the pragmatic reality that plays out on the ground. That is a fact of life in this particular area," he added.

News reports on Turkish media had also recently claimed that a joint force will be established between Turkey and the U.S. for the patrolling process and that the force will reportedly consist of three Turkish battalions and one U.S. battalion. It will be trained in Gaziantep province and its main aim will be to enhance cooperation.

Should the Manbij model prove a success, Turkey will push for a similar arrangement in eastern Syria. Turkey has said the presence of terror forces near its border constitutes a threat and has launched military operations and other efforts to rid the region of terrorists.