Reports of deal with US for release of Turkish detainee in Israel 'baseless,' official says 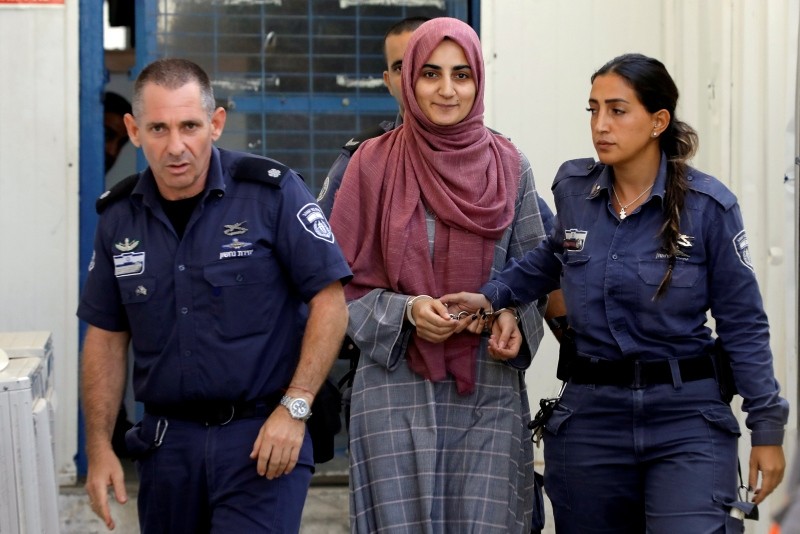 Turkish citizen, Ebru u00d6zkan, who was arrested at an Israeli airport last month, is being brought to an Israeli military court, near Migdal, Israel July 8, 2018. (REUTERS Photo)
by Daily Sabah with Agencies Jul 27, 2018 12:00 am

Reports that a Turkish detainee in Israel was released as a result of a deal with the United States in return for the release of U.S. pastor Andrew Brunson in Turkey are "completely baseless", a senior Turkish official said on Friday.

"We have seen media reports claiming that a deal was made between Turkey and the United States to secure the release of Ebru Özkan, a Turkish citizen imprisoned in Israel on bogus terrorism charges, in return for the release of Andrew Brunson by a Turkish court. Those reports are completely baseless," the official said.

The official added the Turkish government had no intention of meddling in the affairs of Israel's independent judiciary.

"Media reports claiming that Ebru Özkan was released in Israel in return for the release of Andrew Brunson are completely baseless and unreal," said Foreign Ministry spokesman Hami Aksoy.

"As is known, a conditional release decision was made by the court in Israel on July 9. Ebru Özkan was released by the court pending trial and returned to Turkey," he added.

Israel arrested Ebru Özkan while she was visiting as a tourist last month. On July 8, it indicted her in a security court for allegedly aiding Palestinian group Hamas during a visit to Jerusalem, charges her lawyer denied and which angered Turkey. She was deported a week later.

The Washington Post reported on Thursday that Trump asked Israeli Prime Minister Benjamin Netanyahu in a July 14 phone call to let Özkan go in a "trade" for Brunson, a U.S. pastor being charged over his links to the Gülenist Terror Group (FETÖ) and the PKK.

"I can confirm that there was such a request by President Trump," an Israeli official said on condition of anonymity.

Brunson, who denies charges of links to FETÖ - the group behind the failed 2016 coup - was moved to house arrest on Wednesday - prompting the Trump administration to threaten sanctions against NATO-power Turkey. Turkey's response was harsh and dismissive, calling Trump's words "unacceptable" and a "cheap threat."

Justice Minister Abdülhamit Gül said Turkey's judicial system would have the ultimate say on Brunson, adding that "Turkey is a fully independent and sovereign country that determines its own destiny."

At the time of Özkan's release, another Israeli official told Reuters that among the reasons was that, upon review, prosecutors deemed her case too weak to warrant pursuing. But her Israeli lawyer, Omar Khamaisi, said on Friday that the indictment against his client had yet to be withdrawn.

Arriving in Istanbul on July 16, Özkan said President Tayyip Erdoğan and been "kind enough to be very interested in my case". Khamaisi said he was unaware of the alleged diplomatic deal around her release.