Turkey, EU heading in the same direction while Washington goes off the rails 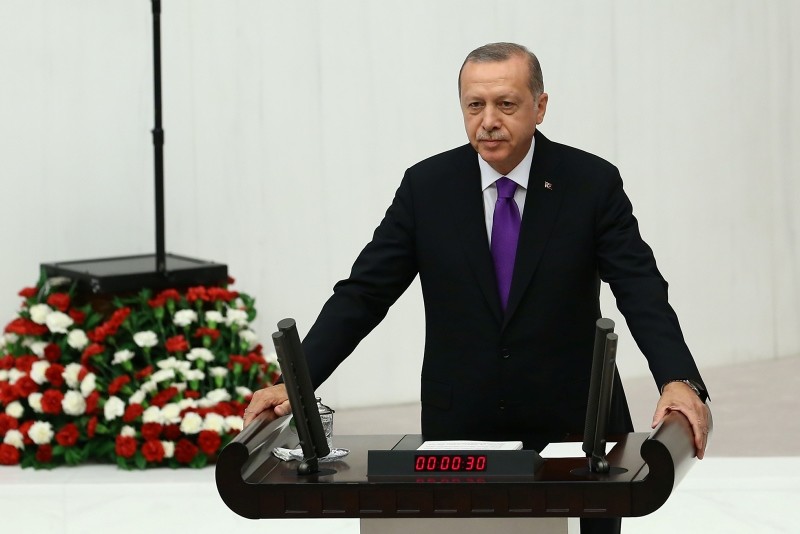 The period of strained relations between Turkey and the EU is being slowly left behind with some positive steps, Erdoğan said. However, he added that the same cannot be said for Ankara’s ties with the U.S.

Turkey's relations with Europe are improving while ties with the United States are deteriorating due to Washington's irresponsible actions toward Ankara, President Recep Tayyip Erdoğan said yesterday at the opening of the second legislative year of the 27th term of Parliament. "In recent years, our relations with the EU and some European countries went through a tense period due to unjust accusations against us. Some European countries used anti-Turkey rhetoric for domestic politics. We are now leaving this period behind us," Erdoğan said during his speech, which touched upon several foreign policy issues.

Last week, Erdoğan visited the U.S. for the United Nations General Assembly, followed by a three-day visit to Germany where he met with his German counterpart, Frank-Walter Steinmeier, and German Chancellor Angela Merkel. "It put us in a stronger position that we kept our promises [toward the EU] despite the unjust treatment. It is out of the question for us to turn our backs on a region that is our biggest trade partner and where five million of our brothers of Turkish-descent live," Erdoğan said. The diplomatic ties between Turkey and the EU particularly suffered in the period following the failed July 15, 2016 coup attempt.

Ankara has criticized the bloc for a lack of solidarity in the face of the attack on Turkish democracy by the Gülenist Terror Group (FETÖ) and also for their tolerance of the PKK terrorist group's followers within the EU's borders.

"Positive messages from several EU countries signal bright days ahead [in relations]. We will enter a period where we expect a lot of progress in political, economic and humanitarian areas," Erdoğan said.

In contrast to the improving relations with the EU, Erdoğan said that ties with Ankara's decades-old NATO ally, Washington, have been damaged severely to due disagreements relating to FETÖ, Washington's Syria policy, the U.S.' support of the PKK's Syrian affiliate and also the recent economic sanctions imposed on Ankara.

"Another problematic area for us is our relations with the U.S. We are deeply saddened by the fact that the current administration in the U.S. is taking aim at our country in a manner that defies logic, politics and the strategic depth of our long-standing relations as strategic partners," Erdoğan said.

"The ringleader and many members of the terrorist organization that attempted a coup in our country are protected by this country," the president said, referring to FETÖ leader Fetullah Gülen, who has been living in the U.S. since 1999, and many FETÖ-linked figures who have used the U.S. as a safe haven.

He also criticized Washington for supporting the PKK terrorist group's Syria affiliate, the People's Protection Units (YPG), as part of its Syria policy.

"The U.S. cooperated with the separatist terrorist organization in Syria by completely disregarding our sensitivities and concerns," Erdoğan said.

Turkey sees the YPG as a group organically linked with the PKK, which is listed as a terrorist organization by the U.S., Turkey and the EU.

Erdoğan said Turkey is in favor of normalizing the relations with the U.S. administration and underlined that the normalization of ties would be beneficial for the two historically strategic NATO allies.

"I am of the opinion that the administration in the United States will, sooner or later, recant this twisted perspective of our country," he added.

Ankara-Moscow work for peace in Syria, ties based on mutual benefits

In addition to the EU and the U.S., Erdoğan also touched upon Turkey's relations with Russia. He said the ties between the two countries have improved after a short period of tension in 2015 when a Russian jet was downed by the Turkish Air Force on Turkey's Syrian border.

"We are implementing projects with Russia that serve our mutual interests in many areas, such as those regarding Syria, tourism, the defense industry and energy. As you know, some time ago, there were a number of provocations aiming to damage our relations with Russia. We were able to overcome these difficulties with common sense and mutual restraint," Erdoğan said.

Turkey and Russia have been putting forward joint efforts on Syria, which have brought them closer to one another. The two countries have different positions in Syria regarding the Bashar Assad regime; however, the two countries have been able to jointly establish mechanisms and efforts to reach a political solution in the country. Recently, Moscow and Ankara reached a deal for opposition-held Idlib, which was put to work to prevent a regime bombardment on northwestern Idlib province, home to nearly 3.5 million civilians.

"When the [U.N.-led] Geneva process became deadlocked, we led the way for a new effort for peace in Astana. When the agreements in Astana were violated by the regime, we began to discuss other ways to solve this problem with Russia," he added.

According to the Idlib deal, a 15-to-20-kilometer-wide area will be established as a demilitarized zone as of Oct. 15. Furthermore, the radical groups will also be pushed out and the demilitarized zone will be free of heavy weaponry.

"This agreement was welcomed around the world and raised hopes for a solution in Syria based on a new constitution and free elections. In short, Turkey has taken direct initiative and has a say on the ground in the Syrian crisis, where it bears the greatest burden," Erdoğan said and added that more than 50,000 Syrians have returned to the region in Idlib after the deal was reached.

"In our view, it is important not to exclude Iran from decisions regarding the future of the region. We also believe that the threat of sanctions directed at this country is not fair," he said. "Previous experience also indicates that the imposition of sanctions is unproductive. In the future, Turkey will determine its policies by focusing on its own interests and needs in line with our fundamental principles rather than by taking into account the demands of others."

Erdoğan said Turkey is determined to clear PKK and YPG terrorists from its borders with Iraq and Syria.

"Our next goal is to clear the areas in Manbij and the east of the Euphrates from the terrorist organization that currently occupies these regions," the president said, referring to the U.S.-backed YPG.

Turkey has long argued that the presence of the YPG in northern Syria poses a threat to its national security and that it will not allow it to fulfill its aim of establishing autonomy along its borders.

The terrorist group has vowed to connect several provinces in northern Syria, from east to west, and reach the Mediterranean Sea as an opening. However, Turkey, backing the Free Syrian Army, launched Operation Olive Branch on Afrin, which was a key province for the YPG at the time, earlier this year to stop that from happening.

Ankara has also signaled an operation on areas in the east of the Euphrates to clear the YPG from the northern Syria region completely.

"Our goal is to clear Qandil, which we see as the source of the problem, and Sinjar, which promises to become the new Qandil, completely from the separatist terrorist organization," Erdoğan said, while also urging the Iraqi government to take concrete measures against the PKK, as it did against the Daesh terrorist group.