MBS may face investigation in Argentina for Khashoggi murder, Yemen 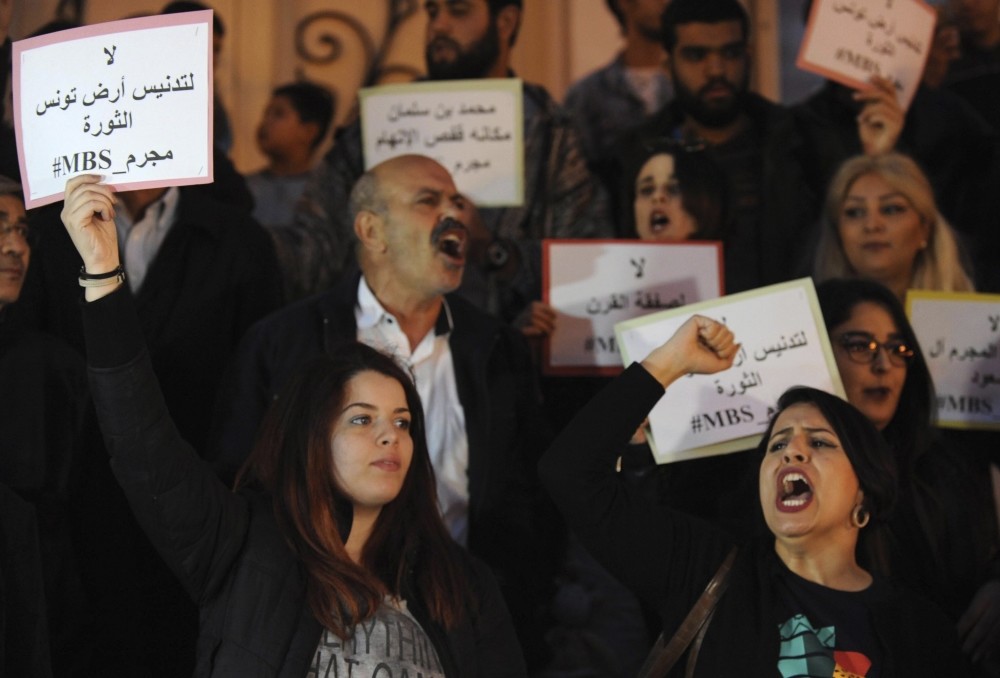 Protestors hold placards reading in Arabic u201cno to the desecration of Tunisia, the land of the revolutionu201d during a protest against the visit of MBS in Tunis, Tunisia, Nov. 26.
by Daily Sabah with Agencies Nov 28, 2018 12:00 am

Pressure on Saudi Arabia's Crown Prince Mohammed bin Salman, also known as MBS, is mounting as a rights group asked Argentina to use a war crimes clause in its constitution to investigate his role in possible crimes against humanity, particularly regarding the war in Yemen and the murder of journalist Jamal Khashoggi, ahead of a G20 summit that will be held in country's capital Buenos Aires this week.

Human Rights Watch (HRW) said yesterday that its submission was sent to federal Judge Ariel Lijo. Argentina's Constitution recognizes universal jurisdiction for war crimes and torture, meaning judicial authorities can investigate and prosecute those crimes no matter where they were committed.

Khashoggi, a columnist for The Washington Post and a known critic of MBS, went missing after entering the Saudi Consulate in Istanbul to obtain documents related to marriage on Oct. 2. After weeks of denying any involvement in the crime, Saudi Arabia later admitted that Khashoggi had been killed inside the consulate but denied that the royal family and crown prince had any prior knowledge of or responsibility for Khashoggi's killing.

The incident was blamed on lower-level officials, including five that are now facing the death penalty over their involvement. The killing of Khashoggi has strained Saudi Arabia's ties with the West and battered MBS's image abroad.

Yemen, on the other hand, has been wracked by conflict since 2014, when Shiite Houthi groups overran much of the country. MBS, the former defense minister, and Saudi Arabia's allies launched Operation Decisive Storm in March 2015. The Saudi and UAE-led war in Yemen has caused growing international unease after high-profile coalition airstrikes killed scores of civilians, many of them children.

HRW's Middle East and North Africa director, Sarah Leah Whitson, said the international rights group took the case to Argentina because MBS will attend the opening of the G20 summit this week. "We submitted this info to Argentine prosecutors with the hopes they will investigate MBS's complicity and responsibility for possible war crimes in Yemen, as well as the torture of civilians, including Jamal Khashoggi," Whitson told Reuters. Argentine media cited judicial sources as saying it was extremely unlikely that the authorities would take up the case against the crown prince, Saudi Arabia's de facto ruler.

Amid the ongoing pressure regarding the case, MBS launched his first visit abroad last week. MBS visited the United Arab Emirates (UAE) last Thursday as the first stop of his tour. Following his three-day visit, MBS arrived in Bahrain on Nov. 25. The crown prince was due to arrive in Egypt on Tuesday for a two-day visit, state news agency MENA reported.

MBS is also expected to visit Algeria and Mauritania; however, his visit to some countries, particularly Tunisia where he landed late Monday, witnessed the continuation of the pressure on him as the people organized protests against the crown prince.

Dozens of protesters gathered in central Tunis on Monday night to protest the prince's arrival for talks with the Tunisian President Beji Caid Essebsi. Essebsi's office said Tunisia denounces the journalist's killing and wants a full investigation but doesn't want the killing to be used to destabilize Saudi Arabia.

Amid suspicions of the prince's involvement in Khashoggi's death, a Tunisian lawyers' group tried to seek a court order blocking his visit. The Tunisian journalists' union sent a letter to the president calling it an "attack on the principles" of the 2011 revolution that brought democracy and freedom of expression to Tunisia.

In Egypt, the Civil Democratic Movement, an umbrella of nine opposition groups, also criticized the crown prince's scheduled visit to Egypt. The movement said MBS's visit was "an attempt to beautify his image as a result of Khashoggi's killing."

On Sunday, the Foreign Ministry of Algeria, one of the MBS's stops during his tour, strongly condemned the "horrific assassination" of Khashoggi, in the first official comment by Algiers on the murder. Algerian activists have also launched online campaigns against the planned visit by the Saudi crown prince to the country.

The planned visit to Mauritania was also criticized as it was considered an attempt to "polish MBS's image" in Mauritanian media.

While Saudi Arabia is dealing with the international pressure over the murder, Turkey continues to share details of the case while searching for further evidence at the same time. Yesterday, Foreign Minister Mevlüt Çavuşoğlu for the first time described details from audio tapes of the crime during an interview with Germany's Sueddeutsche Zeitung. A forensic doctor is "instructing the others – they should listen to music while he dismembers the body," he said in the interview. "You can tell he is enjoying it, he likes to cut up people. It is disgusting," Çavuşoğlu added. Previously, Turkey said it has given copies of the recording of the killing to Saudi Arabia, the U.S., Germany, France and Britain. "He was killed within seven minutes. It was a premeditated murder," Çavuşoğlu said, adding that they did not decide to kill him after they could not persuade him to return, refuting the Saudi prosecutors' claims.

On Monday, Turkish police carried out comprehensive inspections at two villas in the northwestern province of Yalova as part of the ongoing investigation into the killing of Khashoggi.

The Turkish prosecutor's office said in a statement Monday that the findings show one of the suspects, Mansour Othman M. Abahussain, had contacted a Saudi citizen, Mohammed Ahmet A. Alfaozan, also known by his codename "Ghozan," who was living in the Samanlı village of Yalova province, a day before the incident took place in the Saudi Consulate. "It is estimated that the meeting was about hiding/disposing of Khashoggi's body," the statement added.

Previously, Turkish authorities carried out inspections for their search for the remains of Khashoggi in Belgrade Forest, located in the northern edge of the European side of the Bosporus, and the province of Yalova across the Marmara Sea.

Mattis, Pompeo to brief US senators on Saudi Arabia

Bob Corker, the outgoing chairman of the Senate Foreign Relations Committee and a critic of U.S. President Donald Trump, told reporters that Pompeo and Mattis would brief the full Senate at 11 am in a closed-door session. Corker said he also hoped CIA Director Gina Haspel would attend.