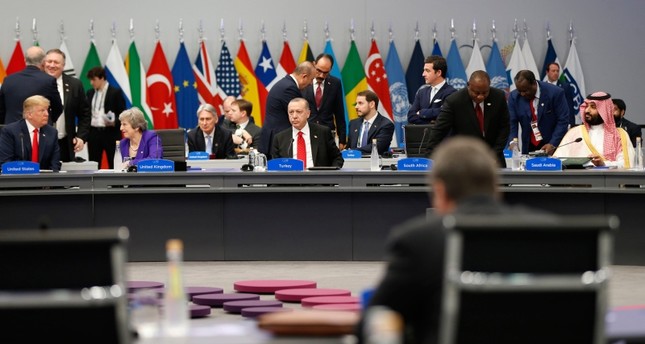 President Recep Tayyip Erdoğan in a New Year's letter issued to world leaders Monday emphasized the importance of global peace and stability and enhancing Turkey's relations with its global partners in 2019.

Addressing the U.S. president as "dear friend" in the letter, Erdoğan told Donald Trump that the past year has been one in which they overcame difficulties faced by the two countries and put in a mutual effort to improve bilateral relations.

"I believe that we will increase our bilateral relations based on mutual respect and sincere dialogue to the levels required by our strategic partnership and that the future of our cooperation will be brighter," Erdoğan said.

Erdoğan said that he hopes Turkish-American cooperation will continue to make significant contributions to global peace and stability.

In his New Year's message addressed to Russian President Putin, Erdoğan highlighted the importance of bilateral relations between Turkey and Russia, stressing that he expects the continuity of these relations in next year.

In his message to the U.K.'s May, Erdoğan said that the cooperation and joint efforts between the two countries have significantly developed in the past year and that he hopes the U.K. and Turkey continue to build on these relations.

"I would like to reiterate my belief that Turkish-British cooperation will continue to make significant contributions to global peace and stability in the European continent and beyond, in an international environment full of uncertainties," Erdoğan said.

In a similar message to French President Macron Erdoğan underlined that the relations between France and Turkey will be further developed in the upcoming year.

He noted that he believes Turkish-French cooperation will continue to make significant contributions to peace and stability against the challenges faced by Europe and the Middle East.

The president told Xi Jinping that the relations between the two countries are growing stronger in all areas.

Erdoğan once again reiterated his belief that Turkish-Chinese cooperation will continue to contribute significantly to global peace, prosperity and stability, particularly in the face of international economic and trade challenges.

Erdoğan also invited the Chinese president to Turkey in the upcoming year for the continuity and the development of bilateral relations.

Erdoğan started his message to Indian Prime Minister Narendra Modi saying that he still keeps the warm memories of his visit to their beautiful country and highlighted the importance of solid relations between two countries.

Share on Facebook Share on Twitter
Previous in Diplomacy President Donald Trump has ordered a slowdown to the withdrawal of... Next in Diplomacy In his New Year's messages to world leaders, Erdoğan underlined the...
DAILY SABAH RECOMMENDS