Erdoğan, Putin meeting in Moscow to focus on post-US Syria 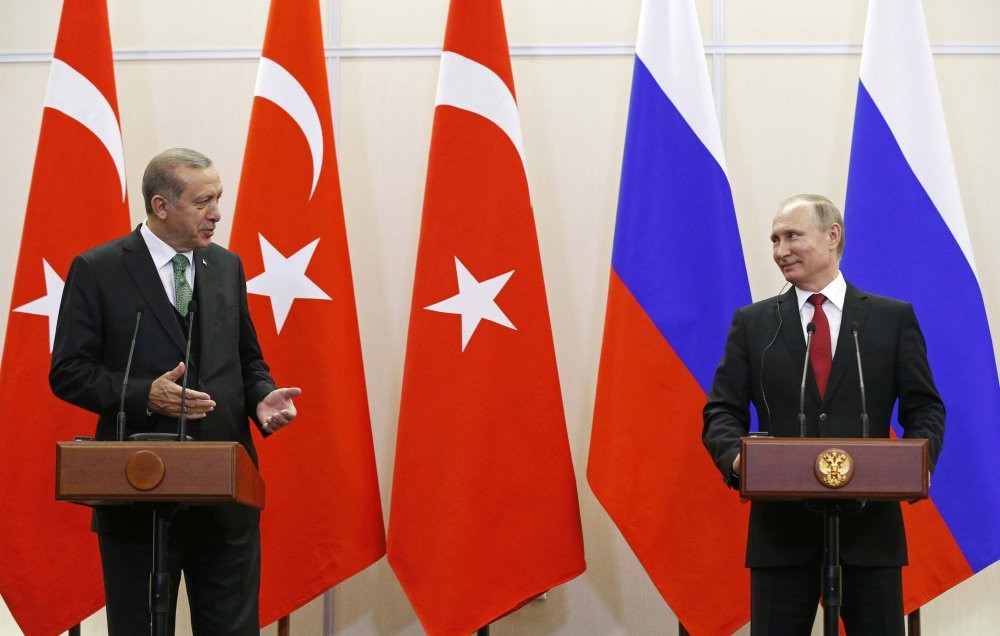 President Erdoğan and his Russian counterpart are expected to discuss the future of Syria after the U.S.' withdrawal from the region and the two countries' coordination on the matter among other bilateral issues

Diplomatic traffic between Turkey and Russia for 2019 begins Wednesday as President Recep Tayyip Erdoğan will fly to Moscow to meet with his Russian counterpart with an agenda of topics concerning both nations, particularly the post-U.S. military withdrawal period in Syria.

Erdoğan announced his official visit last week in Parliament, saying that he will hold "a one-on-one meeting with Mr. [Vladimir] Putin."

Speaking about the visit Monday, the president said that they will talk about the areas in Syria that have been liberated from terrorist elements.

Following Erdoğan's announcement last week, Presidential Spokesperson İbrahim Kalın said that the aim of the visit is to discuss the situation in Syria after the U.S. withdraws from the war-torn country.

"We will have the opportunity to handle both Syria and the issues regarding bilateral relations in detail," Kalın said.

Turkey and Russia have cooperated on many issues in Syria in the past year through seven face-to-face meetings and 18 phone meetings. Of such meetings, a particularly important one saw the materialization of the Sochi deal. In September 2018 Erdoğan and Putin agreed, following their talks in Sochi, to establish a demilitarized zone in Idlib in order to decrease tension and prevent a new conflict in the province.

According to the 10-article memorandum signed between Ankara and Moscow during the meeting, the Idlib de-escalation area will be preserved, and Turkish observation posts will be fortified and continue to function. Russia will also take all necessary measures to ensure that military operations and attacks on Idlib are avoided, and the existing status quo is maintained. The agreement also envisaged the removal of "all radical terrorist groups" from the demilitarized zone by October 2019.

Regarding the Sochi deal, Foreign Minister Mevlüt Çavuşoğlu said yesterday that it is one of the most significant developments that reflect the solution oriented policies of Turkey. "With the Idlib deal, we did not only prevent a catastrophe or a humanitarian disaster, but we've also opened the last window of opportunity for a political solution," said Çavuşoğlu.

Last week, Ankara accused the Bashar Assad regime of provoking terrorism in Syria's northwestern Idlib de-escalation zone as Turkey pushes to establish stability and maintain peace amid clashes between the Syrian regime and opposition forces, as well as fighting between opposition groups.

Touching upon the Syrian regime's steadfast discomfort over the political process on the Syrian conflict, Çavuşoğlu said last week that the Sochi deal has been implemented successfully yet the regime continues to violate the deal. Çavuşoğlu added that media reports suggesting that the Hayat Tahrir al-Sham (HTS) captured 50 percent of Idlib were wrong.

The Syrian regime has continued its aggression in Idlib, home to more than 3.5 million Syrians, many of whom fled from other cities in the war-torn country. On Sunday, regime forces and Iranian-backed terrorist groups fired artillery into villages situated inside the de-escalation zone, killing at least one civilian. According to local sources, the regime targeted villages in the countryside of the Homs and Idlib governorates.

Erdoğan also said last week that they plan to hold a trilateral meeting with Russia and Iran. In December 2018, Russia announced that it's their turn to host the summit and they are planning to do so in early 2019.

The meeting will be the latest step of the Astana peace process, set up in early 2017 by Russia and Iran, the main supporters of the Bashar Assad regime, and moderate opposition backer Turkey.

The last meeting between the three leaders, Erdoğan, Putin and Iranian President Hassan Rouhani, took place in Tehran in September 2018, with the fate of the opposition-held Idlib province dominating the agenda.

In a statement following the meeting in Tehran, the parties said: "There can be no military solution to the Syrian conflict, and it can only end through a negotiated political process." They also emphasized a "continued commitment to the sovereignty, independence, unity and territorial integrity of Syria, as well as to the purposes and principles of the U.N. Charter and highlighted that they should be respected by all." Apart from Syria, another topic of discussion is expected to be the purchase of the S-400 missile systems during the visit.

In December 2017, Ankara agreed to buy two Russian-made S-400s in a deal worth over $2 billion. Turkish officials have repeatedly said the purchase of the S-400 systems was made to fulfill the country's security needs. Ankara has been disappointed with its NATO allies for their lack of cooperation in meeting its defense needs.

Last week, a U.S. delegation and Turkish officials discussed a $3.5 billion sale of the Patriot missile and air defense systems and its technical aspects, dwelling on the compatibility of the U.S.-made F-35 fighter jets and Russian-made S-400 defense system. During the visit in Ankara, the U.S. delegation informed their Turkish counterparts about the capabilities of the Patriot system, reiterating U.S. fears of Ankara's purchase of the S-400s and its effects on F-35 fighter jets, according to Milliyet daily. In response to the delegation's concerns, the Turkish side assured them that the S-400's systems will be based on domestic software.

Erdoğan previously said that the S-400 missile system negotiations between Ankara and Moscow are a done deal, and the U.S. was not in a position to say something about it, adding that Turkey needs both the Russian-made S-400 air defense systems and the U.S.-made F-35 fighter jets.