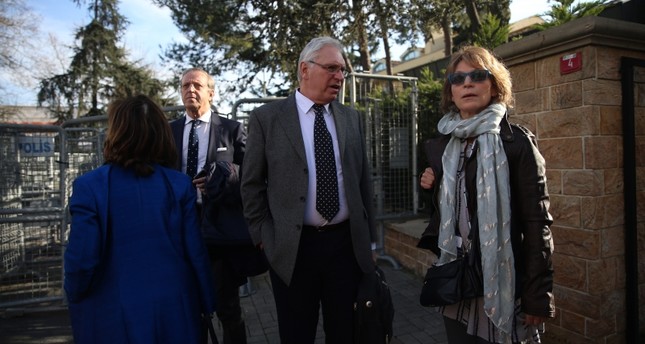 U.N. Special Rapporteur on Extrajudicial and Arbitrary Executions Agnes Callamard, who is in Turkey to discuss the murder of Saudi journalist Jamal Khashoggi, was denied entry into the Saudi Consulate in Istanbul on Tuesday.

"To be fair the request to them has come quite late, so we need to give them a bit more time to process our request," she said. "We are respectfully calling on the authorities to give us access at some stage while we are here."

Callamard met with Foreign Minister Mevlüt Çavuşoğlu and Justice Minister Abdulhamit Gül in Ankara on Monday. She met with Istanbul Chief Public Prosecutor Irfan Fidan on Tuesday afternoon as part of the investigation into Khashoggi's murder.

"We welcome @AgnesCallamard's visit to Turkey in relation to the murder of Saudi journalist Jamal Khashoggi," Altun wrote on Twitter. "We still do not know where Khashoggi's body is, who ordered the hit and who the "local collaborator" was. Justice must be served."

Khashoggi, a columnist for the Washington Post and a critic of Saudi Crown Prince Mohammed bin Salman, was killed and dismembered by Saudi agents at its consulate in Istanbul on Oct. 2, provoking an international outcry.

In a statement last week, the U.N. High Commissioner for Human Rights said Callamard would begin an international investigation into Khashoggi's murder, starting with a visit to Turkey from Jan. 28 to Feb. 2. The statement said Callamard would examine the evidence to determine the nature and extent of the responsibility of governments and individuals in the killing of the journalist, as well as reactions and steps taken by those governments regarding the murder.

Callamard will present the information obtained during the investigation and her recommendations during the June session of the U.N. Human Rights Council.

Callamard, a French academic who is director of the Columbia Global Freedom of Expression Department at Columbia University in New York, reports to the U.N. Human Rights Council in Geneva and has a global mandate to investigate executions. She is accompanied on the visit to Turkey by Baroness Helena Kennedy, QC, and former World Academy of Forensic Medicine President and Coimbra University Faculty of Medicine head Dr. Duarte Nuno Vieira.

Share on Facebook Share on Twitter
Previous in Diplomacy The next meeting of the Astana talks, which were initiated by Turkey,... Next in Diplomacy Presidential Spokesperson Ibrahim Kalın and U.S. national security...
DAILY SABAH RECOMMENDS