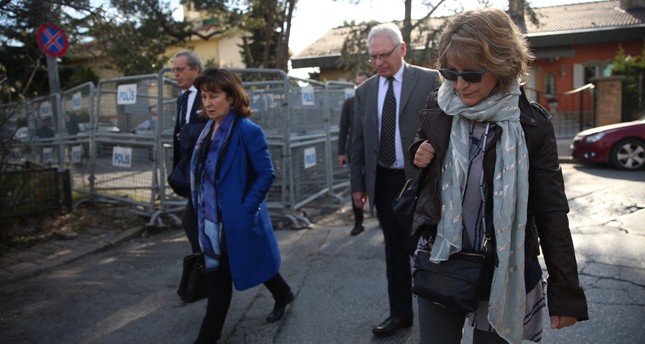 After being denied entry to the Saudi consulate, Agnes Callamard (R) said that they just wanted to get a sense of the building while calling on the authorities to grant them access, Jan. 29, 2019.

The kingdom has made it difficult to investigate the Khashoggi murder, recently by denying permission for a U.N.-led inspection of its consulate in Istanbul

Saudi Arabia's uncooperative approach in aiding in the Saudi journalist Jamal Khashoggi murder investigation has not changed, with the kingdom refusing to make the process easier for United Nations officials. Agnes Callamard, the U.N. special rapporteur on extrajudicial, summary or arbitrary executions, who is leading a team of experts in an international inquiry into the killing of Khashoggi and is currently in Turkey, went to the Saudi Consulate in Istanbul Tuesday, where Khashoggi was killed on Oct. 2. However, the rapporteur's demand to enter the consulate was denied, forcing her to inspect the grounds while walking around the site.

Despite the unhelpful attitude of the Saudis, Callamard kept her calm, saying, "The request to the Saudi Consulate came quite late, so we need to give them a bit more time to process our request." "We just wanted to [get an] overview of it, and we are respectfully calling on the authorities to give us access," Callamard told reporters. Callamard is set to report her findings to the U.N. Human Rights Council this June and will be in Turkey until Saturday for the probe. "The report will be made public a few weeks before I present it to the human rights council in Geneva, so the end of May possibly," she said.

"We still do not know where Khashoggi's body is, who ordered the hit and who the 'local collaborator' was. Justice must be served," wrote Fahrettin Altun, referring to an alleged local who may have been involved in the disposal of Khashoggi's body. Khashoggi, a columnist for The Washington Post and a critic of Saudi Crown Prince Mohammed bin Salman, was killed and dismembered by Saudi agents at the kingdom's consulate in Istanbul on Oct. 2, provoking an international outcry.

In a statement last week, the U.N. High Commissioner for Human Rights said Callamard would begin an international investigation into Khashoggi's murder, starting with a visit to Turkey from Jan. 28 to Feb. 2. The statement said Callamard would examine the evidence to determine the nature and extent of the responsibility of governments and individuals in the killing of the journalist, as well as reactions and steps taken by those governments regarding the murder.

Callamard, a French academic who is the director of the Columbia Global Freedom of Expression Department at Columbia University in New York, reports to the U.N. Human Rights Council in Geneva and has a global mandate to investigate executions. She is being accompanied on the visit to Turkey by Baroness Helena Kennedy QC and former World Academy of Forensic Medicine President and Coimbra University Faculty of Medicine head Dr. Duarte Nuno Vieira.

Saudia Arabia's uncooperative approach has been consistent since the day Khashoggi was murdered. However, it first started with repeated denials from the kingdom, claiming that Khashoggi was not killed at all. After eventually acknowledging the murder, Saudi officials continued their denials this time for proving the innocence of the royal family and Crown Prince Mohammed bin Salman, saying that they had no prior knowledge of the murder, although all evidence has been pointing to the crown prince as the mastermind. Despite more than 100 days passing since Khashoggi's assassination, the whereabouts of his body remain unknown.

Ankara has used every means available to bring those responsible to justice, while maintaining international pressure. Turkish officials previously said they shared evidence with Saudi Arabia and other nations about Khashoggi's killing and repeatedly called for the suspects to be extradited to Turkey, where the crime was committed. Saudi authorities have denied Turkey's requests and said the suspects will be tried in the kingdom.

A Saudi public prosecutor's spokesman said last year that 21 Saudis were taken into custody in relation to the case, 11 of whom have been indicted and referred to trial. Earlier this month, the prosecutor said it was seeking the death penalty for five of the 11 detained suspects.