Turkey to do what is necessary to reduce tensions between Pakistan, India, Erdoğan says 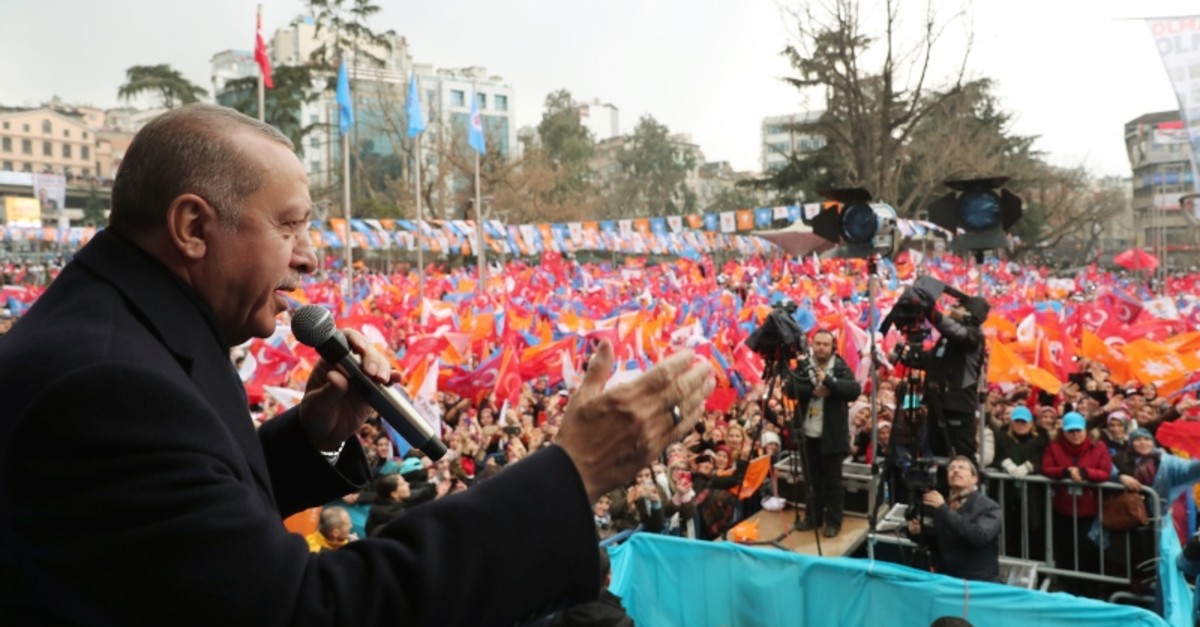 President Recep Tayyip Erdoğan said Saturday Turkey is ready to do what is necessary to reduce the tensions between Pakistan and India, which have been running high since a suicide bombing in Indian-controlled Kashmir in mid-February followed by accusations, clashes on the border and downing of an Indian jet.

"Pakistan's bona fides in the release of the captured Indian pilot is a stance that should be appreciated, we hope that our Indian friends reciprocate in a similar manner," Erdoğan told supporters during an election rally in northern city of Trabzon, noting that no one will benefit from escalating the tensions.

Erdoğan was referring to Friday's return of Indian Wing Commander Abhinandan Varthaman, whose MiG fighter was shot down a day earlier as he chased Pakistani jets over disputed Kashmir. He had become the focus of renewed hostilities between the nuclear-armed rivals which have alarmed the international community.

The president added that he spoke with his Pakistani counterpart Arif Alvi and Prime Minister Imran Khan to exchange how to defuse the situtation.

Erdoğan also reminded the brotherly ties between Turkey and Pakistan stemming from the aid of Indian Muslims, the ruled by the British Empire, for the Turkish War Independence against WWI Allied nations and Greece, in addition to decades of cooperation in culture, military, economy and disaster management.

Tensions between the two nuclear-armed rivals have soared since a suicide bombing in Kashmir on Feb. 14 by Pakistan-based Jaish-e-Mohammad militants killed 40 Indian paramilitaries. India has long accused Pakistan of cultivating such militant groups to attack it. Pakistan has denied any involvement in the suicide attack.

Indian aircraft crossed into Pakistan on Tuesday, carrying out what India called a pre-emptive strike against militants blamed for the bombing. Pakistan retaliated, shooting down a fighter jet Wednesday and detaining its pilot, who was returned to India on Friday in a peace gesture.

Despite the move, Indian and Pakistani soldiers have again targeted each other's posts and villages along their Line of Control (LoC) in disputed Kashmir, killing at least six civilians and two Pakistani troops, officials said Saturday.

It marked the first fatalities for Pakistani troops since Wednesday. Indian police, meanwhile, said two siblings and their mother were killed in Indian-controlled Kashmir. The three died after a shell fired by Pakistani soldiers hit their home in the Poonch region near the LoC. The children's father was critically wounded.

The rivals have fought two of their three wars over Kashmir since their independence from British rule in 1947.

The current violence marks the most serious escalation of the long-simmering conflict since 1999, when Pakistan's military sent a ground force into Indian-controlled Kashmir. That year also saw an Indian fighter jet shoot down a Pakistani naval aircraft, killing all 16 on board.

Thousands of people on both sides of Kashmir have fled to government-run temporary shelters or relatives' homes in safer areas to escape shelling along the frontier, which is marked by razor wire, watch towers and bunkers amid tangled bushes, forests and fields of rice and corn.

In a sign of improvement in ties, Pakistan's minister for railways, Sheikh Rashid Ahmed, told reporters Saturday that the Samjhauta Express train service linking the Pakistani city of Lahore with the Indian border town of Atari would resume on Monday. The service was suspended by Pakistani authorities this past week.

Rebel groups have been fighting Indian rule since 1989 and demand that Kashmir be united either under Pakistani rule or as an independent country.