Working with Turkey can minimize US policy failures in Middle East 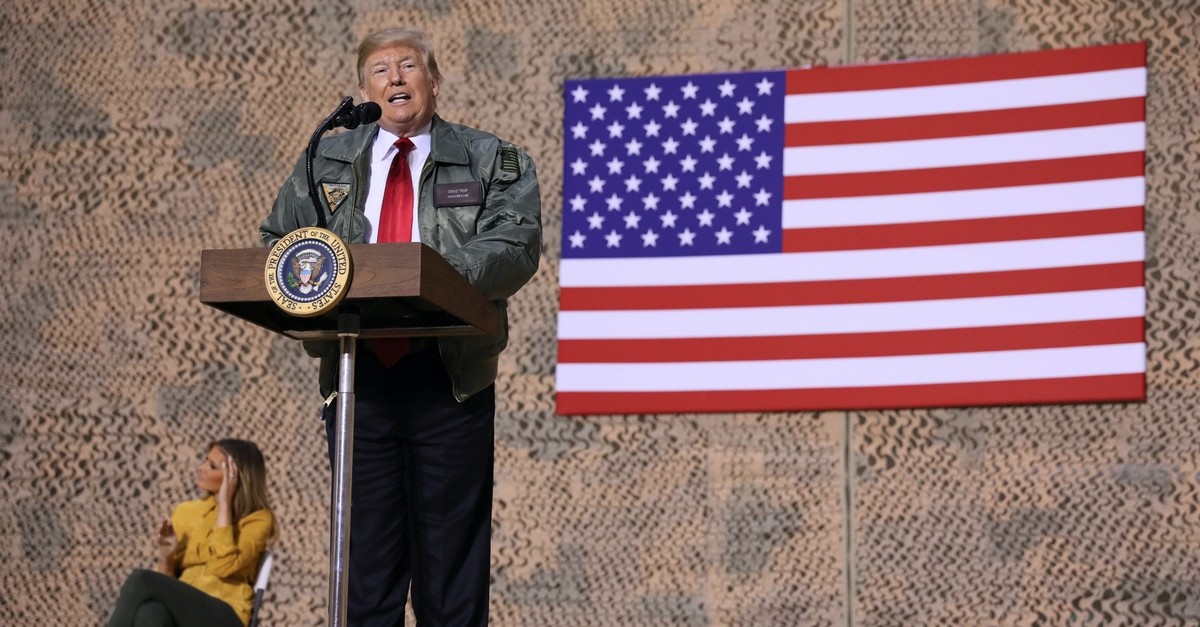 The U.S. has not been successful in its Middle East policy for the past two decades, Trump said. For Ankara, cooperation with Turkey over regional matters would only minimize future policy failures

U.S. President Donald Trump on Saturday admitted that Washington's policy in Syria and Iraq proved to be a failure and ineffective after 20 years, a position that Ankara has long voiced, particularly over the U.S. partnership with the PKK's Syria affiliate under the pretext of the fight against Daesh. "We spent $7 trillion in the Middle East, and we can't land a plane with lights on 20 years later. How bad is that," Trump said on Saturday at the Conservative Political Action Conference (CPAC), criticizing his country's foreign policies in Iraq and Syria.

"These remarks are a continuation of Trump's broader policy that aims to end the U.S. role as a world policeman, focusing more on internal economic problems. Trump understands that Washington's policy to cooperate with the YPG [the PKK's Syria affiliate, the People's Protection Units] is not sustainable nor benefits U.S. interest in the long term," Oytun Orhan, an expert on Syria, told Daily Sabah, referring to Trump's recent statements. Pointing out that his administration will focus on fixing U.S. infrastructure rather than fighting "endless wars," Trump added: "We [said we] would be in Syria for 4 months but we ended up 5 years. Just funny." The U.S. has been a warring party in Syria since 2014 with an initial aim to support the opposition with non-lethal aid against the Syrian regime along with France, the U.K. and Canada.

However, Washington support was swiftly changed to arm support to the PKK-affiliated People's Protection Units (YPG) by the Obama administration under the pretext of fighting Daesh. Ankara has objected to the decision since, saying that partnering with one terrorist group to fight another is illogical and the cooperation put Washington ties with its NATO ally at risk.

U.S. Syria policy and support for the YPG has faced furious backlash from Ankara, which underscored that its NATO ally's moves in the region do not befit the spirit of partnership. Turkey has long called on the U.S. to give up insisting on missteps and increase cooperation with Ankara to resolve ongoing problems in the region.

EU not secure if Syria crisis not solved

"If the Syrian crisis is not solved, neither we nor Europe would have security," President Recep Tayyip Erdoğan said yesterday at a rally in northern Ordu province. The president underscored that no decision can be made in the region neglecting Turkey.

He noted that it is significant to resolve the conflict for the stability of the region and beyond. Erdoğan stressed that Turkey is resolute to clear east of the Euphrates of the terrorists to enable the return of Syrians to their homes.

He pointed out that 315,000 Syrians have returned to their homes in areas cleared by terrorists with Turkey's operations and added that this number continues to increase.

As Turkey has long called on the U.S. to stop supporting the YPG since the fight against Daesh is over, Trump announced in December 2018 that the U.S. would withdraw its troops from Syria, following his phone conversation with Erdoğan. He noted that the only reason U.S. troops were in Syria was to defeat Daesh, and since Daesh has been defeated there is no need for Washington to stay in Syria.

Trump's swift decision sparked the resignation of former Defense Secretary James Mattis and raised a range of criticisms, attempting to undermine the pullout decision. Trump's sudden decision prompted divergent voices and criticism suggesting that Daesh continues to be a threat, and it would be a betrayal of the U.S. ally on the ground.

Stressing that despite his willingness, Trump has needed to continue cooperation with the YPG to end Daesh, his utmost priority; Orhan noted that he believes that Trump is more resolute to ally with Washington's traditional partners including Turkey in his future Middle East policy.

In relation to U.S. cooperation with the YPG, Foreign Ministry spokesperson Hami Aksoy on Saturday called for Washington to list the YPG as a terrorist group just as it does for the terrorist PKK, referring to the U.S. State Department official statement to continue recognizing called PKK as a terrorist organization.

"The U.S. State Department stressed the commitment to the fight against the PKK. We expect the United States to show the same approach against the PYD/YPG in the region," Aksoy said in a statement.

The State Department first designated the PKK as a terrorist group in 1997, and through this designation, the PKK is denied access to the U.S. financial system. The designation helps U.S. agencies and governments in law enforcement in relation to the PKK and anyone deemed a member of the terror group. The U.S., however, while listing the PKK as a terrorist group, opted to continue the steadfast militarily support for the terrorist organization under the pretext of fighting Daesh despite warnings from Ankara. Turkey sees the YPG as an extension of the PKK.

Anadolu Agency (AA) reported over the weekend that the YPG has offered to transfer Daesh members and their families in Syria into neighboring Turkey, which was targeted by and has actively fought against the two terrorist groups.

The deal allows Daesh members and their families to stay in YPG camps in Syria if they wish. Daesh members who don't want to stay in the camps were promised alternative routes, including into areas liberated following Turkish military campaigns Operation Euphrates Shield (Jarablus, Al-Rai, Azaz, Dabiq and Al-Bab districts) and Operation Olive Branch (Afrin district) or into areas controlled by the Bashar al-Assad regime.

Under the deal, the YPG will provide a special travel document to Daesh members seeking to leave the camps. With this document, Daesh terrorists and their families will be able to reside in territories occupied by the YPG. Furthermore, injured Daesh members will be treated in hospitals held by the YPG/PKK and will be discharged within two months.

A similar deal was previously reached in Raqqa in Oct. 2017, when Daesh terrorists were besieged by the YPG-dominated Syrian Democratic Forces (SDF) in their de-facto capital after heavy clashes. Militants and their families were evacuated in a secret deal only to be revealed months later, with many ending up in Turkey or Afrin after being directed to smuggling gangs or settled in the northwestern Syrian district to be used against Turkish forces.

"We will not allow any terrorist corridor in northern Syria," he told a group of veterans and martyrs' families in eastern Ağrı province, adding that Turkey is committed to defeating terrorism both inside the country and abroad.

In December 2018, Erdoğan announced that Ankara is in preparations for the third offensive in northern Syria, this time east of the Euphrates, which is dominated by the YPG. The operation, however, was put on hold when the Trump administration declared the U.S. troops pull out from the country.