Trump agrees '100%' to keep US military presence in Syria to prevent clashes between Turkey, YPG 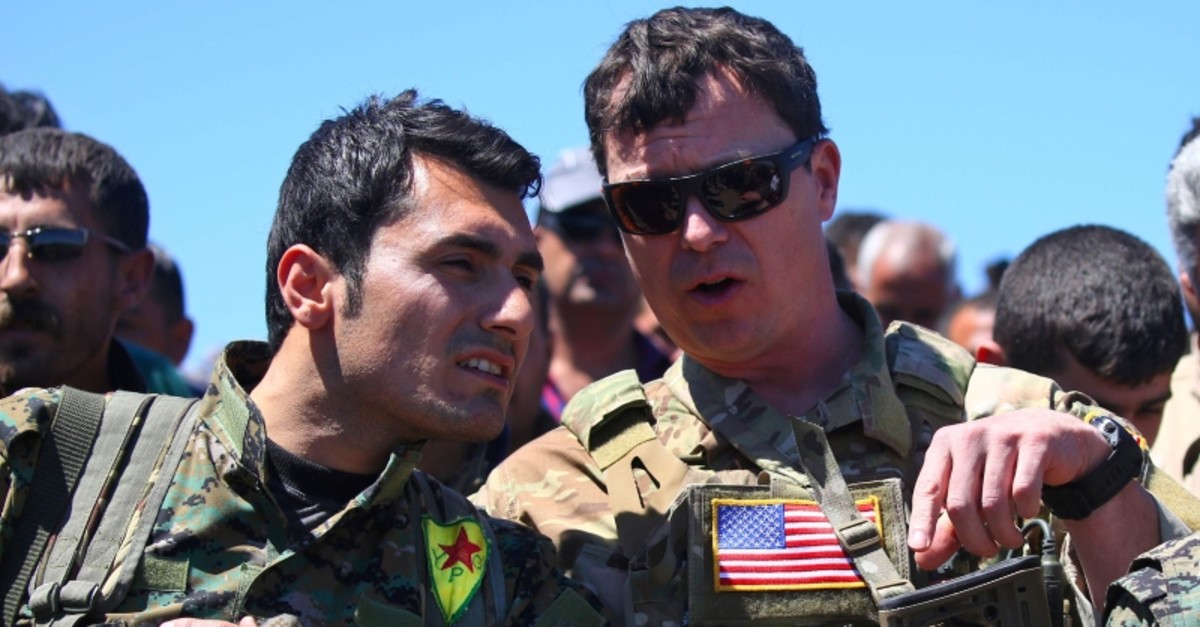 This file photo taken on April 25, 2017 shows a US officer, from the US-led coalition, speaking with a YPG terrorist at the site of Turkish airstrikes near northeastern Syrian Kurdish town of Derik, known as al-Malikiyah in Arabic, on April 25, 2017.
by Daily Sabah Mar 05, 2019 11:35 pm

U.S. President Donald Trump agrees "100%" that American soldiers should stay in Syria to prevent clashes between Turkey and the Syrian Democratic Forces (SDF), a terrorist organization led predominantly by the People's Protection Units (YPG) terrorists, a letter written by the president showed on Tuesday.

"Like you, we seek to ensure that all of the gains made in Syria are not lost, that ISIS never returns, that Iran is not emboldened, and that we consolidate our gains and ensure the best outcome in Geneva for American interests," a bipartisan group of Senators and Representatives told Trump in the letter, using an alternate acronym for the Daesh terrorist group.

"An international presence will also help prevent conflict between our NATO ally Turkey and the Syrian Democratic Forces that have been central to counter-ISIS campaign," the letter continued, touching upon a proposed military group consisting of American soldiers and ground forces from "our European allies."

Trump's shocking announcement on Dec. 19 that he was withdrawing all 2,000 American troops from the conflict-wracked Middle Eastern country concerned allies and prompted the resignation of his then defense chief Jim Mattis.

Since then, however, administration officials appear to have walked back considerably and the current envisaged timetable is unclear.

One of Turkey's top concerns is that U.S., while withdrawing, takes back the weapons and ammunition it gave to the YPG, as it pledged.

Turkey and the U.S. remain at odds over the latter's Syria policy, which is centered on support to the globally-recognized terrorist group PKK's Syrian wing the YPG. The U.S. allied itself with the YPG to fight Daesh in Syria, but Turkey argued that using one terror group to fight another makes no sense.